The British Library and National Library of Scotland are pleased to announce the availability of a new gazetteer which allows all the names on the Roy Military Survey Maps of Scotland (1747-55, British Library Maps CC.5.a.441) to be searched and browsed. Through the hard work of a team of volunteers over the last six months, all 33,523 names on the Roy Map have been recorded. The transcription workflow has also recorded related or nearby names from the Ordnance Survey 1st edition mapping from a century later in order to help searching and provide additional context for the Roy names. The results are of huge value for local and family historians, placename researchers, as well as all those interested in the landscape of 18th century Scotland. As well as being able to find any name on the map, it is also possible to now generate distribution maps of particular name elements, or dynamically view all of the names in a particular area. The Gazetteer can also be downloaded in accessible formats for onward use and research. 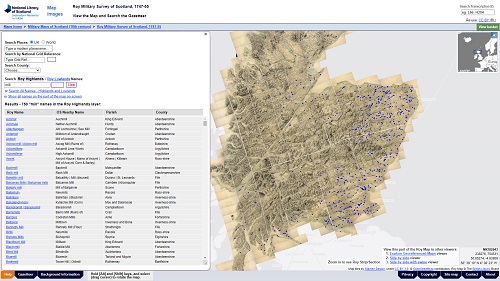 The Roy Military Survey Map is surely one of the most significant and attractive maps of Scotland. It was a distillation of military intelligence, planned in the wake of the defeat of the Jacobites at Culloden in 1746, and surveyed at the same time as the brutal ‘pacification’ of the Highlands. The English military commanders in Scotland during the Jacobite Rebellion of the ‘45 had been 'greatly embarrassed for want of a proper Survey of the Country' and something needed to be done about it. The decision to place the Survey in the hands of a young civilian from a small village near Carluke, William Roy - who had no military surveying experience, and who was then in his early 20s - was a surprising one, even if it turned out to be an inspired and successful decision. Over the next eight years, until the mid 1750s, the whole of the Scottish mainland was surveyed at the detailed scale of one inch to a thousand yards, or about 1:36,000. For many parts of the Scottish Highlands, it is the most detailed and informative map that survives for the entire 18th century, and for all areas, the only standard topographic map prior to the Ordnance Survey mapping in the 19th century. As part of the King George III Topographical Collections, it has always been a treasured item within the British Library’s holdings, and fortunately more recent digital technologies have allowed its wider availability online, as well as transcription projects like this. 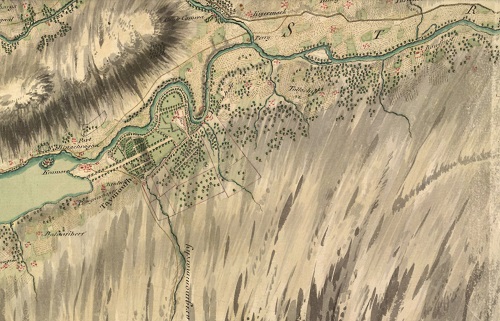 A detail from the Roy Military Survey of the environs around Kenmore in Perthshire, with the lower end of Loch Tay to the left.

Our project to record all of the names on the Roy Map was based on the long interest in the map from those hunting for the existence and location of particular places, especially for local and family history purposes. Place name researchers have also regularly examined the Roy Map as a key documentary source for the 18th century. Many of the textual entries on the map allow other types of research too, confirming the location of things like mills, kirks, castles and estate grounds. Many significant elements of the pre-Improvement landscape - such as the smaller kirk towns and cottar towns, as well as things like moors and commonties - are clearly shown too. But libraries lack the manpower for major gazetteer recording projects, and although machine-learning and artificial intelligence continue to make strides, we felt that the only way to achieve our objective at present was by gathering a volunteer group as part of a crowdsourcing project. 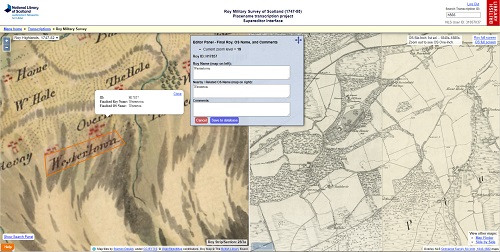 The Roy Map transcriptions interface, allowing both the Roy Map name (left) and the Ordnance Survey first edition name (right) to be transcribed.

In January 2022 we asked for volunteers to help with three new map transcription projects, and were thrilled (and relieved!) to find over 650 people signed up to take part. We were able to create the interfaces for recording the names using the open-source web-mapping software behind the NLS maps website, and this was helpful, as we continued to change and update these interfaces in response to feedback. We also set up an online discussion forum for participants, which has been very heavily used - 142 members, and over 210 posts over a 5 month period. Successive phases of the project revised and checked the initial names, and their related Ordnance Survey names, so that all of the names were reviewed and edited several times over. The success of the project owes itself very much to these volunteers, who have not only put in several months of hard work, but also continued to suggest changes as we went along to improve the results. As with all website projects, we also have the ability to keep revising and correcting names in response to feedback - the Gazetteer will become ever more perfect over time! Although we have just now launched the Gazetteer, some minor revision work is still ongoing, and we are happy to receive suggestions and corrections from the wider community. 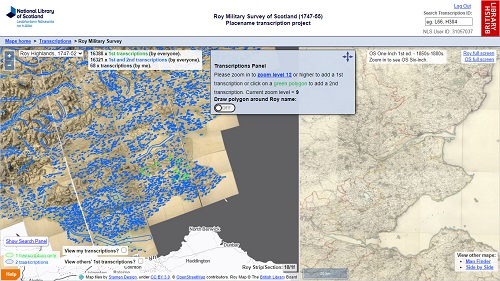 Would William Roy have approved? We certainly hope so - as the “father” of what became the Ordnance Survey, he would have fully understood the value of national initiatives to gather geographic and topographic information. He would surely have delighted in the detailed scrutiny which his ‘magnificent military sketch’ was still getting, over 250 years after its original creation. That said, he might feel puzzled and worried about all the tartan, now very visibly on sale only a stone’s throw from where his Military Survey was drawn in Edinburgh Castle!

View the results of the Roy Military Survey Gazetteer Project: