A new and correct plan of the city of Bath and places adjacent, produced in 1750 (and in numerous further editions thereafter) included a number of very useful points of information for the Georgian visitor-tourist to Bath, which during the 18th century became the incredibly popular spa resort we recognise today. 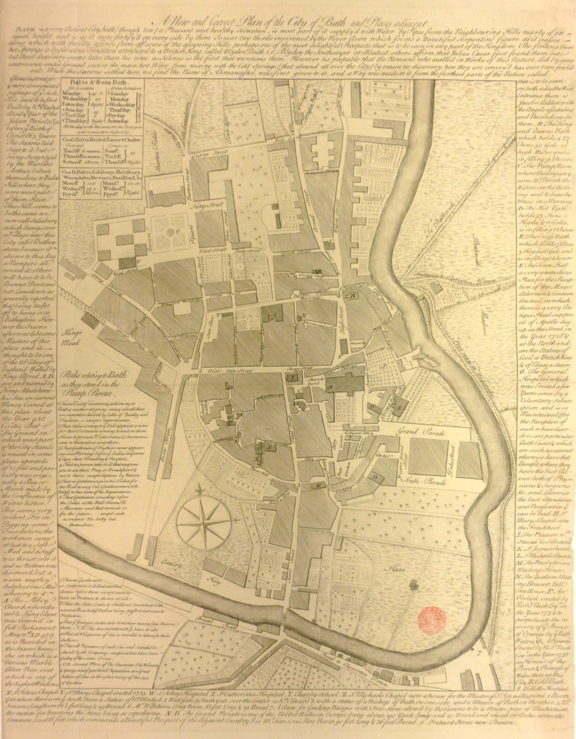 Local publishers were rather smart in noting the market for a concise map with added historical descriptions, detailing things like the postal service, and most importantly the ‘Rules relating to Bath as they stand in the Pump Room.’

These are the rules of etiquette to be observed when attending Bath’s oh so fashionable assembly rooms. The pump room was where families new to the town would announce themselves. Created and maintained by a man called Beau Nash – Bath’s unofficial master of ceremonies – the rules provide a brilliant insight into society and public spaces, a map of society. Observe

7. that no gentleman or lady take it ill that another dances before them except such as have no pretence to dance at all.

8. That the elder ladies and children be content with a second bench at ye ball as being past or not come to perfection.

9. That ye younger ladies take notice of how many eyes observe them. N.B. this does not extend to ye have at alls.

10. That all repeat of such lies and scandal be shun’d by all company ; except such as have been guilty of the same crime, N.N. several men of no character, old women and young ones of question’d reputation are great authors of lies in this place being of the sect of levellers

It all sounds like valuable advice to me, of at least equal value to the map of the town and its history. With this latter information to hand, one could demonstrate familiarity and learning when engaged in conversation. I can just imagine a family fighting for a glimpse of the map en route to the pump room. ..

…or maybe that wouldn’t be a Georgian thing to do.

Posted by Tom Harper at 11:27 AM in Georgians-revealed | Permalink