The recent controversy surrounding the Times Comprehensive Atlas of the World was interesting in all sorts of ways. 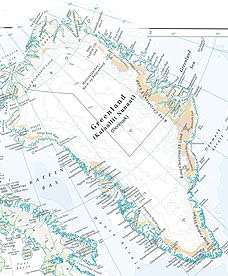 To recap: the publicity which accompanied the new 13th edition of the Times Atlas focused upon changes visible on the maps which had been wrought by environmental change. We saw the Aral Sea - or more appropriately the Aral mudflat. We also saw the eastern coast of Greenland with alarmingly diminished ice cover – 15% less ice than in 1999 according to the press release.

“We’re all going to die!” shouted the majority of the inhabitants of Norfolk, and promptly ran for the hills. “Hang on a minute, this can’t be right” shouted an incensed scientific community. And united in fury at the obvious inaccuracy (as well as not having been consulted in the first place), they forced concessions including an apology from the publishers HarperCollins, a promise to include an updated insert map, with a printed explanation of the error. Science showed cartography who was boss, no mistake there.

Whether the error was the result of deception or just a horrible misunderstanding (and it is difficult to believe the former), perhaps the only real mistake of the map was to define the incorrect border between the white (ice) and brown (once ice) so very clearly. The map, in short, was too good, and that made it terrible. My own pocket atlas shows a far more gradated, blurred division between ice and non ice. Actually, if you look at it in a certain way and with certain intent, it does seem to agree with the withdrawn claims. Now you see how very dangerous maps can be.

The widespread astonishment which greeted the revelation of an inaccurate map will have raised a wry smile amongst those of you who recognise the inherent subjectivity of maps.

However, to me the most interesting point about the argument is that it concerns the receding of ice-cover, a process of movement, whilst the map is a snapshot of a static and unmoving earth. Not a brilliant thing to show movement and change. Even while the atlas was being printed, the situation would have changed. At a sufficiently large scale, local changes in the ice would happen before our eyes. Why not publish a seasonal atlas, one for the summer months, one for the winter months, if you want to try and catch the flow, as well as the ebb.

In the Daily Mail, our Head of Maps Peter Barber talks about Ten of the greatest: Maps that changed the world

And in the Telegraph, Sarah Crompton gives us a personal account of her visit to the exhibition, 'At last I can see the point of maps'. Read it here

Our Press Officer tells me that we had 79 pieces on the press in April alone. I've yet to read an unfavourable review. Thanks to everyone who's been blogging and tweeting too.

The beginning is nigh!

'Is this the end or the beginning?' I have been asking myself today, while the final pieces of our cartographic puzzle fall into place. A big question but unusually (as far as big questions go) one with a clear definite answer: we are most certainly about to begin. This past week has seen Magnificent Maps become fully formed, with maps arriving daily from the conservation studios and being placed on walls. Thanks to our team of conservators and, once again, to our expert exhibitions staff.

Of special excitement this week has been the arrival of the nine loan maps from the extremely generous lenders. I was especially pleased to see the colossal de' Barbari map of Venice from 1500, lent by our friends the British Museum, when I popped down to the gallery one morning. In fact, I liken the effect to running downstairs to the letterbox one morning back in the mid-1980s and seeing my first Beano lying on the doormat.  Other incredible objects are Middle Temple Library's Molyneux globes of 1592 - the first English, and at the time largest globes in existence, and the medieval Evesham World map. Today saw the installation of the earliest map in the exhibition, a fragment of the Forma Urbis Romae, part of a colossal map of Rome dating to 200 AD. I can say with absolute sincerity that no reproduction in any book can compare with the effect of seeing the original.

Dave has been diligently taking footage of these and other maps (such as the Klencke Atlas) being installed, and you'll be seeing some highlights here in due course.

Peter and I have been giving a number of interviews to press, radio and television reporters, which looks set to continue tomorrow with the official press view of the exhibition. A recent highlight is The Guardian's art correspondent Jonathan Jones's typically perceptive piece last Saturday, while the first exhibition review appears in today's Times Online. There has been similary good feedback from British Library colleagues who accompanied Peter and myself on a number of preliminary tours today. Now although they are all extremely polite people, I am sure that their complimentary comments were not borne purely out of politeness. It is nearly time for you to make up your own mind.

As well as the four 'The Beauty of Maps' programmes on BBC4 this month (see previous post), here are some links to recent coverage of Magnificent Maps in the press and on radio.

The Independent, 20 March: 'The truth about maps' by Michael Church