Yesterday's US festivities reminded me about something I'd looked at many times before. It is well known how the union of the words and music for The Star-Spangled Banner came about. The tune was composed by John Stafford Smith and was very popular at the end of the 18th century in England. It was used as a setting for lots of different words, and even travelled across the Atlantic to the newly independent colonies. But it wasn't until the battle of Fort McHenry in 1814 that Francis Scott Key penned the poem that we are familiar with today and the tune was published with those words.

The tune began quite differently, however. It was first published in London around 1780 as the Anacreontic Song, 'as sung at the Crown and Anchor Tavern in the Strand', for the Anacreontic Society, a singing and drinking club. There were lots of such clubs at this time, and they would meet and sing catches, glees, and suchlike. Indeed, the song was subsequently arranged as a 3-part glee and published in 1799. 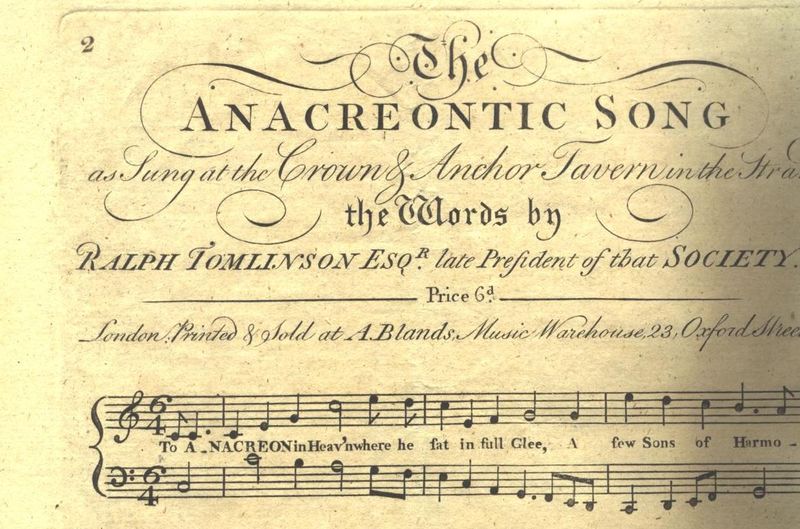 But who was Smith? It turns out that he has an eminent musical pedigree which appears quite at odds with what one would expect for a composer of bacchanalean ditties. He was a church musician, scholar, and one of the earliest music historians. His musical education began with his father, the organist at Gloucester Cathedral, after whom he studied with Boyce in London, and sang variously at the Chapel Royal and Westminster Abbey. Further, he was a great collector. Sadly, his library was dispersed after his death before proper records could be made of what it contained. But we do know that he owned the Old Hall manuscript and Mulliner Book, two anthologies which have preserved much important British music of the 14th and 16th centuries and which are two of the British Library's musical jewels today. What else must his library have contained?

Smith's interest in the past led him to collect music from old sources and libraries, to gain an understanding of the origins of British music. Some of the fruits of these labours were published in his anthology Musica Antiqua (1812), evidently intended to complement in music editions the famous histories of Hawkins and Burney. Smith's opinion of those two writers is a story for another time.

For the moment it's interesting to reflect on the origins of this national hymn. While the words capture the aspirations of the New World and reject the Old, the music belongs to a long musical tradition, composed by someone with an extraordinarily wide range of musical talents and interests.

Posted by Richard Chesser at 12:02 PM

John Smith has a memorial in Gloucester Cathedral