A brief history of the Christmas carol

As the festive season is upon us, it seems a good time to look at the history of the Christmas carol and to explore, with the help of the British Library’s collections, the origins of some of the best-known carols. This is the first of two posts on the subject, and focuses on the early history of the carol.

The medieval English carol was a song with verse-plus-refrain structure, and probably derives from the French carole, a dance accompanied by singing. The early English carol wasn’t sung solely at Christmas, and didn't always have a religious theme. In the late 14th century, simple carols were sung at festivals in England, often during processions. The Boar's Head Carol, performed while the head of a boar was presented on a platter during the Yuletide feast, is one such celebratory carol:

The boar's head in hand bear I
Bedecked with bays and rosemary
I pray you, my masters, be merry
Quot estis in convivio [so many as are in the feast]

Caput apri defero, Reddens laudes domino [the boar's head I bring, giving praises to God]
The boar's head, as I understand,
Is the rarest dish in all this land,
Which thus bedecked with a gay garland
Let us servire cantico. [let us serve with a song]

Our steward hath provided this
In honor of the King of bliss
Which, on this day to be served is
In Reginensi atrio: [in the Queen's hall]

(Version from The Queen’s College, Oxford. First printed in 1521.)

In the 15th century, a more complex, polyphonic carol, usually for two or three voices, was sung in monasteries and chapels. These carols were in Latin, French or English - or, like the Boar's Head Carol, were ‘macaronic’ (in a mixture of languages). More than a hundred of these carols survive with their music, in a handful of manuscripts. The Windsor Carol Book (Egerton MS 3307) dates from about 1430-1444 and was probably copied at St George’s Chapel, Windsor. It contains a mass, hymns, motets and carols - and a drinking song. Images of the complete manuscript are available on DIAMM, the Digital Image Archive of Medieval Music. The Ritson Manuscript (Add MS 5665), named after an 18th-century owner of the book, was compiled in Devon over a 50-year period (ca. 1460-1510) and contains masses, hymns, motets, secular songs and some 44 carols. The carols were designed to be sung on specific dates in the Church calendar, such as saints’ days. There are several for the Nativity, among them 'Alleluia: Now we mirthes make'. 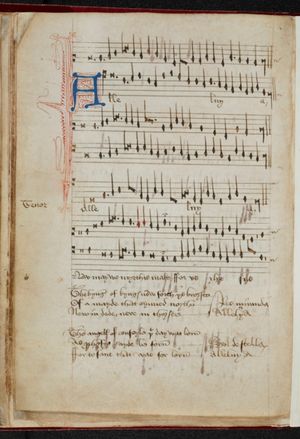 The composers of most of these early carols are unknown. All the carols in the Windsor Carol Book are anonymous; the only composers named in the carols section of the Ritson Manuscript are the somewhat obscure figures Richard Smert and John Trouluffe.

Like carols about the Nativity, carols featuring holly and ivy can be traced back to the middle ages. In these carols, holly symbolised man and ivy represented woman. Here, from the 'Henry VIII Songbook' (Add MS 31922), is a carol by the king himself: ‘Green groweth the Holly’. 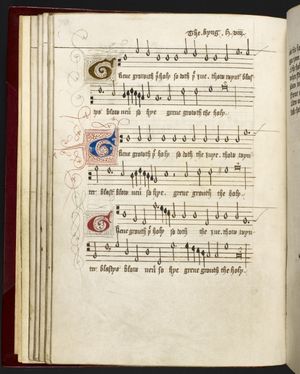 With the destruction of the monasteries at the Reformation, and the rise of newer types of music, the old polyphonic carol went into decline.  However, the phrase ‘Christmas Carol’ did not disappear: a 1572 Latin-English dictionary equates the Latin word ‘Sicinnium’ with both ‘Cristmas caroll’ and ‘Dauncing with singing’, and there is evidence that in the 17th century carols were sung at court. ‘What sweeter music can we bring’, a ‘Christmas Caroll, sung to the king in the Presence at White-Hall’, with words by Robert Herrick, was set to music by Henry Lawes. Unfortunately, the music is now lost.

Robert Herrick: a Christmas Caroll, sung to the king in the Presence at White-Hall (E.1090)

Puritans in England had long railed against the drinking, licentiousness and general excesses that had come to be associated with Christmas, and on 19 December 1644 Parliament issued An Ordinance for the better observation of the monethly Fast; and more especially the next Wednesday, commonly called The Feast of the Nativity of Christ, Thorowout the Kingdome of England and Dominion of Wales, which required people to treat the next 25th December as a solemn day of fasting, not a holiday, and exhorted them to remember the sins of their forebears, ‘who have turned this Feast, pretending the memory of Christ into an extreame forgetfulnesse of him, by giving liberty to carnall and sensuall delights’.  A Parliamentary Act the following year banned the observance of Christmas, Easter and the Saints’ Days altogether and shops were ordered to open as normal on Christmas Day.

It was not possible to stamp out the celebration of Christmas completely, and at the Restoration, in 1660, Christmas carols began to be performed freely once more. These carols were far removed from the monastic and courtly types of carol of earlier times. They were sung by ordinary people, in their homes, and the words of the carols were printed and circulated on broadsheets.  This continued in the 18th century, when the broadsheets were often illustrated with religious scenes.

In my next post, I'll be looking at how the work of a few historians in the 19th century led to a revival of interest in the carol and ultimately to the flourishing of the carols we sing today - many of which are not as ancient or traditional as we may have imagined.