History of the Christmas carol - Part 2

In my last post I traced the history of the carol from its incarnation as a medieval processional song, and its development into a sacred and a courtly composition, to its revival in the late 17th century as a popular Christmas song. In this second post I look at its later history - and at the origins of some of today’s best-known carols.

During the second half of the 18th century, the words of carols were still being circulated on broadsheets like this one, which provided families with separate carols for Christmas Day and the three following days, St. Stephen’s Day, St. John’s Day and Innocents’ Day: 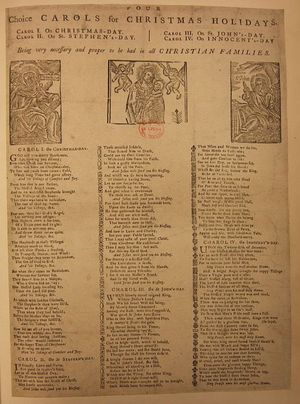 Four Choice Carols for Christmas Holidays. Being very necessary and proper to be had in all Christian families (C.116.i.2.(13.))

The Christmas Day carol is a version of ‘God rest ye merry, gentlemen’. The carols for 26th-28th December feature, respectively, the stoning of Stephen, the beheading of John the Baptist and the slaughter of the children by Herod - perhaps not subjects we would expect to sing about at Christmas today! (In fact the carol-writer got the wrong St John: 27th December is the feast day of St John the Evangelist, not John the Baptist.)

In 1833, the antiquarian William Sandys published Christmas Carols, Ancient and Modern, a collection resulting from his academic research and field-work, mainly in the west of England. Like the folksong collectors Cecil Sharp and Ralph Vaughan Williams a century later, Sandys listened to elderly singers performing the music they had learnt in childhood and transcribed what he heard. In the preface, Sandys noted that the practice of carol-singing had been in decline since the end of the 18th century. The first part of his volume presents carols dating from before 1700. There’s a huge variety of texts, but most are completely unknown today. The second part features ‘modern’ carols, which, in Sandys’s time, were still being sung in the west of England. A few survive to this day, notably ‘A virgin most pure’, ‘The first nowell’, ‘God rest ye merry, gentlemen’, ‘Tomorrow shall be my dancing day’, 'I saw three ships’, ‘Hark, the herald angels sing’ and ‘Whilst shepherds watched’.

Strikingly, the simple verse-refrain structure of the medieval carol is still a characteristic of carols in Sandys's collection. For most carols, he provided the words only, but at the back of the book are tunes, with simple harmonizations, of a few of the carols he heard, including ‘Tomorrow shall be my dancing day’, ‘I saw three ships’, ‘The first noel’ and ‘Hark, the herald angels sing’. In some cases they are not the tunes we sing today.

While carol-singing was still a feature of life in the west country and north of England in the 1830s, things were seemingly different in London, where, according to Sandys, you would be lucky to find anything more than a ‘solitary itinerant’ in the streets ‘croaking out "God rest you merry, gentlemen," or some other old carol, to an ancient and simple tune.’

However, carols were still being printed on broadsheets well into the 19th century. Many were produced by John Pitts or James Catnach, the most important broadside ballad printers of the early 19th century. They were big rivals, who ran their businesses from the seedy Seven Dials district of London. Their carol-sheets were usually sold for a penny or half-penny, and contained the words to four or more carols.

In addition to the carols which have come down to us via the ballad tradition, there are many which are a synthesis of several different elements: they have been crafted and reshaped from earlier works, in many cases by the Victorians or Edwardians. Here are a few examples of these ‘synthesized’ carols.

While shepherds watched their flocks by night

‘While shepherds watched’ is probably the carol with the largest number of variant tunes.  Actually a hymn, the text was first published by Naham Tate in 1700 and may have been written by him.  It became the only legally-authorised Christmas hymn, hence its popularity. The tune to which it is normally sung in England is about 100 years older than the words, and they were probably brought together for the first time in the 18th century. The tune was first published in Thomas East's Whole booke of Psalms (1592), where it appears as the tenor part for Psalm 84.

Psalm 84 from Thomas East's Whole Book of Psalms, 1592 - featuring in the tenor part the tune that became 'While shepherds watched' (K.2.c.7.)

The tune and Latin verses of ‘Adeste, fideles’ are found in manuscripts of the 18th-century scribe John Francis Wade, who moved in Catholic circles and who probably wrote the music himself. The piece apparently earned the nickname ‘the Portuguese hymn’, after the Duke of Leeds heard it at the Portuguese Chapel in London and believed it to be Portuguese.  It made such an impression on the Duke that he commissioned an arrangement by the director of the Concerts of Antient Music, Thomas Greatorex.  It was first performed at one of their concerts in 1797 and was soon sung in Catholic chapels across England. The English words date from the 19th century and are by a Roman Catholic priest and author, Frederick Oakeley (1802-1880), and a Church of England hymn-writer, William Thomas Brooke (1848-1917). 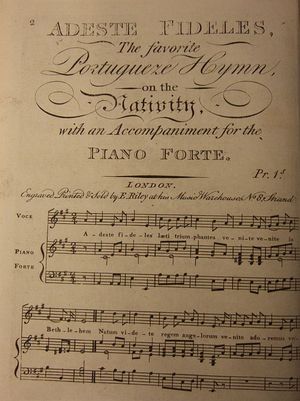 350 years separate the tune and words of ‘Ding dong’. The tune originated as a secular dance, and first appears in the 16th-century dance book Orchesographie, with the title ‘Branle de l’Official’.  The branle was a lively French dance in which the woman jumped in the air. The Anglican priest George Ratcliffe Woodward (1848-1934) set new words to the tune, and the carol as we know it was first published in 1924 in The Cambridge Carol Book. 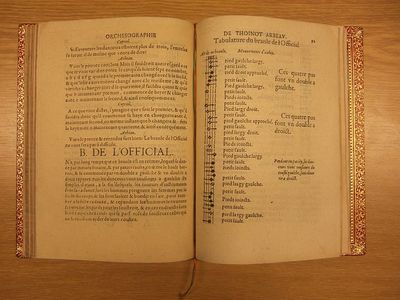 Here is a close-up of the tune from that page:

The English words for ‘Silent Night’ were penned by John Freeman Young, later Bishop of Florida, in the 1850s. The original words and tune are not especially ancient either: they were written, respectively, by the Austrians Joseph Mohr, a priest, and Franz Gruber, a school teacher, and the carol is believed to have been first performed in 1818 in Oberndorf, near Salzburg. The story goes that Mohr and Gruber saved the day by writing the piece for voices and guitar when the organ at Oberndorf church broke on Christmas Eve, though this is probably a myth. What is certain is that Gruber had to resort to the law to prove his authorship, after the Strasser Family (a Von Trapp-style Tyrolean singing group) passed his music off as a newly-discovered folk carol.  The Strassers' pirated version was published in 1835 in Vier ächte Tyroler-Lieder, complete with picture of the singing family. 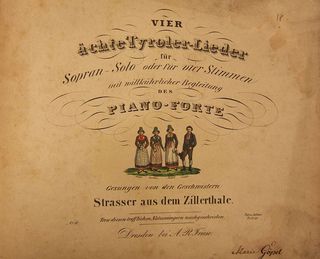 Posted by Sandra Tuppen at 1:59 PM