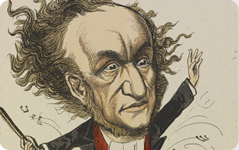 Wagner's writings range widely over subjects as various as race, climate, vegetarianism, aesthetics and modern science. Above all he was formulating ideas that would take dramatic shape in his operas. Distinguished musicologists, literary historians, and translators speak about Wagner's immense literary output with opportunities for discussion and debate. The day will include sessions on Wagner as Librettist, Wagner's Paris writings (1840-42), the Later Aesthetic Essays, and a roundtable discussion on translating Wagner's prose and poetic texts. Speakers include Roger Allen, Hilda Brown, Bojan Bujic, Katharine Ellis, Tash Siddiqui, David Trippett, and Emma Warner. The study day is presented in association with The Wagner Journal and the Wagner 200 Festival, and coincides with the digitisation of the Library's Wagner holdings. A reading of the entire Ring cycle, in English, featuring Sir John Tomlinson and a company of young actors from the Royal Central School of Speech and Drama, directed by William Relton. This event provides a rare opportunity both to experience the richness and subtlety of Wagner's writing and to thrill to the drama of the text as poetry. The reading will be illustrated with scenes from the Ring, by artists including Arthur Rackham (1867-1939), projected on the big screen.

Posted by Rupert Ridgewell at 12:30 PM