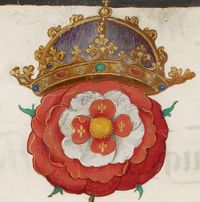 'Music and Monarchy' is the theme of a new four-part television series, presented by Dr David Starkey, which 'reveals how British kings and queens shaped the story of the nation's music: as patrons and tastemakers, and even as composers and performers'. The series promises a refreshing approach, looking at the role played by music in some of the great moments of British history - but always primarily from a historian's point of view.

As with many of his earlier series, Dr Starkey draws heavily on the British Library's collections when telling his 'history of England written in music'. This post draws attention to some of the British Library manuscripts which feature in the first programme, all of which are freely available online.﻿

Two pieces of music in the Old Hall Manuscript are attributed to 'Roy Henry': they are settings of the 'Gloria' and 'Sanctus' of the Mass, both composed in three parts. There has been a great deal of discussion about the true identity of this King Henry, much of it taking place while the manuscript was owned by St Edmund's College at Old Hall Green in Hertfordshire, from where the manuscript gained its modern name before entering the British Library's collections in 1973. Earlier scholars identified the composer as Henry VI or Henry IV, but the consensus is now firmly in favour of Henry V. The manuscript was compiled between about 1415 and 1421, but it is quite possible that Henry composed these pieces before acceding to the throne in 1413.

Images of the complete Old Hall Manuscript are available to view on the Digital Image Archive of Medieval Music (diamm.ac.uk), together with a detailed description, list of contents and extensive bibliography about the manuscript. (This link leads directly to the Old Hall page.) DIAMM requires users to set up a user account before accessing high-resolution images, for reasons of copyright licensing, but this is a simple process.

A later king whose musical predilections are more widely known is Henry VIII. As with 'Roy Henry', music survives which is apparently composed by the king himself: the Henry VIII Songbook was probably compiled around 1518, and includes twenty songs and thirteen instrumental pieces ascribed to ‘The Kynge H. viij’, as well as 76 pieces by other musicians associated with the court. It is most likely that Henry composed this music while still a prince, though some pieces may date from the early years of his reign. The manuscript is not written by Henry himself, and was never part of the royal library: it appears to have been compiled for Sir Henry Guildford (1489-1532), controller of the royal household. It is now numbered as Add. MS 31922, and a description and images are available on DIAMM at this link. 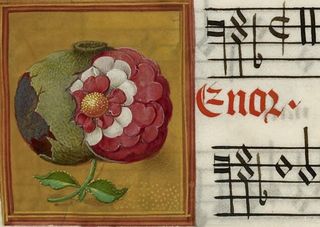 Two other important music manuscripts presented to Henry VIII survived in the king's own library, which now forms part of the British Library's collections. One of them is a magnificent choirbook produced in the workshop of Petrus Alamire, a famous Flemish music scribe who made several similar choirbooks for other European courts. He also acted as a spy, informing Henry of the movements of Richard de la Pole, exiled pretender to the English crown. The opening pages are the most richly decorated, with various Tudor symbols as well as Catherine of Aragon’s pomegranate. This manuscript, Royal MS 8 G VII, is available on DIAMM at this link. 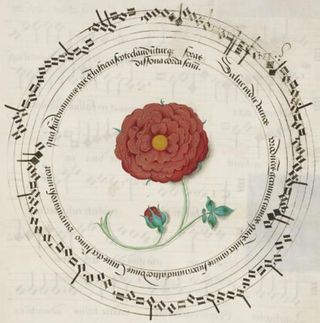 The other grand manuscript was prepared for Henry VIII in 1516 by a successful Flemish merchant named Petrus de Opitiis. It includes a canon (or round) for four voices: two voices sing the music as written and another two sing the same melody a perfect fourth higher, beginning when the first singers reach the points marked with a sign. The words praise the root that has brought forth the scarlet rose of the Tudor dynasty, and it may have been composed to commemorate the reunion of Henry and his two sisters for the first time in 13 years. Royal MS 11 E XI is available on DIAMM at this link, as well as on the British Library's Digitised Manuscripts website here.

David Starkey's series will be screened on BBC 2 starting on Saturday 20 July 2013. Future posts will feature some recent discoveries that shed light on the relationship between music and monarchy in later periods.