The South African born composer Kevin Volans recorded a wide range of music in Lesotho and South Africa during the 1970s. His fieldwork focused on the Zulu, Swazi and Xhosa people. This collection is now available online on the BL Sounds website. 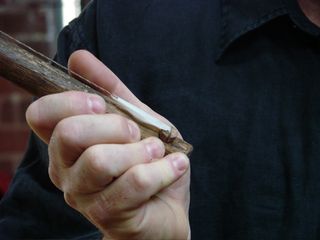 Close up of the quill portion of a lesiba, taken at the Drum Cafe in Johannesburg. (c) Jenny Buccos 2007.

There is a recording of a lesiba being played: this is a stringed-wind instrument which has a quill attached to a long string. The quill is blown across, causing the string to vibrate and resulting in a sound rather similar to a didgeridu. Other names for this type of instrument are gora (see here for an example on the Europeana portal), ugwali and ugwala.

Other highlights from the collection include songs sung by Princess Constance Magogo, accompanying herself on the ugubhu or musical bow. There are several other types of musical bows which feature in Volans' collection, including the segankuru which you can read about in an earlier blog.

As well as the broad range of musical recordings, Volans also recorded some very beautiful soundscapes of birdsong, cicadas, thunderstorms and other atmospheric recordings.

More information can be found about Kevin Volans on his website.