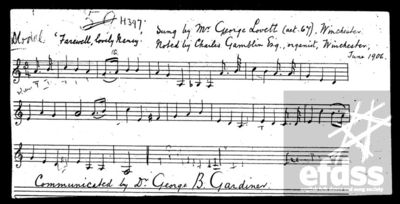 Fare Ye Well, Lovely Nancy (from the George Gardiner Collection at the EFDSS and forming part of The Full English)

ď»żď»żď»żď»żď»żď»żď»żď»żLearn more about Englandâ€™s cultural heritage through folk song, from ballads to shanties. This study day -  to be held at the British Library on Saturday 21 September - explores the history, development and purpose of folk songs collected in England.

The day will be led by renowned folklorist Steve Roud with Julia Bishop - a superb opportunity to share their knowledge and insights into folk song and music. Steve and Julia are co-editors of the acclaimed New Penguin Book of English Folk Songs.

Learn more about the day and how to book via the What's On.

The event forms part of The Full English, a project by the English Folk Dance and Song Society (EFDSS), and supported by the National Lottery through the Heritage Lottery Fund, the National Folk Music Fund and The Folklore Society. The Full English includes the most comprehensive free searchable digital archive in the world. Ralph Vaughan Williams' manuscripts of folk songs and other works, which were deposited after the composer's death in 1958, have been digitised as part of the project.

The Trees They Do Grow High, sung by David Penfold, recorded 1907

Fare Ye Well, Lovely Nancy, sung by George Lovett, recorded 1909 (only a few years after George Gardiner noted it down on paper as in the image above)

The cylinders are owned by the EFDSS but housed at the British Library on their behalf.