Among the various musical bicentenaries this year, one of the most widely celebrated has been the Royal Philharmonic Society's. The manuscript of their most famous commission, Beethoven's Ninth Symphony, will be on display at the Morgan Library and Museum in New York until 1 December 2013, reunited for the first time since 1824 with the other copyists' manuscript overseen by Beethoven, which is now part of the Juilliard Manuscript Collection. The British Library, which acquired the RPS archive in 2002, is proud to continue its association with the RPS. The entire archive has now been digitised, and is available (via subscription or in our reading rooms) as part of Nineteenth Century Collections Online.

The story of the foundation of the Philharmonic Society in 1813 to 'rekindle excellence in instrumental music' has been told many times - most usefully in Cyril Ehrlich's book First Philharmonic (Oxford, 1995). What has not been known until now is just how dedicated the founding directors were to the project, and how grand their original plans were. In an article just published in the Electronic British Library Journal, Leanne Langley tells a fascinating tale of the complex negotiations that led to the building of the New Argyll Rooms, where the Choral Symphony and many other great works were given their first London performances.

The building was devised as an integral part of John Nash's development of Regent Street under the name of the Regent's Harmonic Institution, renamed as Royal Harmonic Institution when it finally opened in 1820, following the Prince Regent's accession as King George IV). The rooms were to be used for a wide variety of concerts and other events, and the complex included a shop selling music published in-house. The plans were to create a Royal Academy of Music, by analogy with the Royal Academy of Arts. The considerable costs were largely underwritten by the directors of the Philharmonic Society, in a personal capacity and in the hope of recouping a profit in the longer term.

Sadly, most of their plans were thwarted. The building burnt down after only ten years, and although it was insured, the costs of replacing it were too great. Meanwhile, the Royal Academy of Music had been founded by other means elsewhere. The Philharmonic Society continued, as a promoter of concerts, commissioner of new works, and supporter of all aspects of the musical world - and continues to flourish in this role to this day. But, as Leanne Langley points out, one important legacy of the sad story of the rise and fall of the New Argyll Rooms is that the area around Oxford Circus quickly became a Mecca of the musical world, and has remained so ever since: first music publishers and instrument sellers placed their shops nearby, to be followed in the twentieth century by record shops. Perhaps it is no coincidence that the BBC built Broadcasting House at the top of the same development, to sit alongside the mass of cultural organisations which began with the Philharmonic Society.

Read Leanne Langley's article, 'A Place for Music: John Nash, Regent Street and the Philharmonic Society of London' by following this link.

English folksong at the British Library 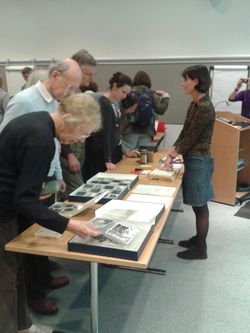 Saturday 21st September saw the London leg of The Full Englishās tour of Folksong in England Study Days, which took place in the British Library.

Renowned folklorist Steve Roud led the study day with a guest talk from Julia Bishop, Steveās co-author of the New Penguin Book of English Folk Songs who is also currently leading the project to produce the James Madison Carpenter Collection. See a full report by Scott Standing of the Full English's blogspot. 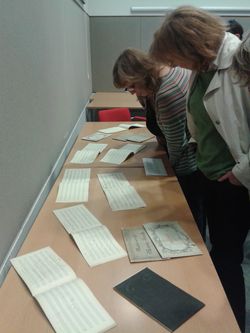 British Library curators, Nicolas Bell (Lead Curator Western Music) and Janet Topp Fargion (Lead Curator World and Traditional Music) organised a 'show and tell', bringing out items from the collections that now form part of the Full English's digital archive, such as Ralph Vaughan Williams folksong transcriptions, plus related items such as newly acquired photographs of Percy Grainger and selections of folksong recordings including wax cylinders recorded by Vaughan Williams, many of which are available for listening online at BL Sounds.

The Music Collections of the British Library offer many surprises. Two small volumes in the Hirsch Collection provide unexpected insights into dancing at the court of the French king Louis XV (1710-1774) as well as some historic dance repertoire that is well worth reviving.

The two volumes are bound similarly, in leather with gold tooling on the spine. Both have the arms

of Louis XV on the front cover and the words āPetite Ecurie du Royā stamped on the back. The bindings link them to dance entertainments at the French court since the kingās music establishment formed part of the Petite Ecurie. The first volume contains a collection of individual contredanses, each with its own distinctive title. The second volume has a series of contredanses, each of which has the same title āPotpourri franĆ§ois des contre-danse ancienne, tel, quāil se danse chez la reineā. They are numbered in order by hand, within a cartouche engraved at the top of the titlepage for this purpose.

All these dances are choreographies for four couples facing inwards in a square formation. They are cotillons, a dance type which became very popular in the 1760s. Cotillons alternate simple āchangesā, in which all together dance in a circle or partners take hands to circle round and back and so on, with āfiguresā, which use a greater range of steps and more complex formations. In most cotillons the same figure is repeated after each change, to the same music. They are lively and energetic and great fun to dance. In potpourri cotillons each change is followed by a different figure and the music for both change and figure is different each time. They are a challenge to memory, musicality and stamina. 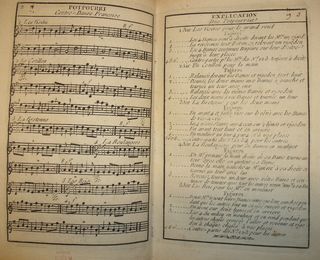 These little choreographies were all published by the dancing master Landrin, active from the 1760s to the 1780s. They can probably be dated before the death of Louis XVās queen Marie Lesczynska (1703-1768). So, we have a glimpse of the repertoire danced at French court balls around the time that the cotillon was becoming the fashionable dance. Perhaps the Library can help start a new dance craze with some old dances?

Posted by Richard Chesser at 12:51 PM