If you hear the sound of church bells on 16 November they will probably be ringing to mark the tercentenary of Fabian Stedman’s death. And if you regularly hear and enjoy the sound of bellringing but are not a ringer yourself, Fabian Stedman (1640-1713) might be one of the most influential people you’ve never heard of.

The peculiarly English art of change-ringing developed from the late 16th century. A way of hanging church bells had been found which enabled ringers to control the speed at which they rang, making it possible to change the order in which the bells sounded – hence the name change-ringing. So for example five bells in a tower no longer had to ring over and over in a single basic order 1-2-3-4-5, 1-2-3-4-5, but pairs of them could now be swapped round each time: 1-3-2-4-5, 1-3-2-5-4, 1-3-5-2-4 etc.

As the 17th century progressed, some ringers began to further develop the range of changes which could be rung. Stedman was one of them. The son of a Herefordshire clergyman, he was apprenticed to a printer in London, where he became an active ringer. In 1668 his professional and personal interests combined when he published the anonymous Tintinnalogia, or the Art of Ringing (attributed to ‘a lover of that art’), the first book on change-ringing. 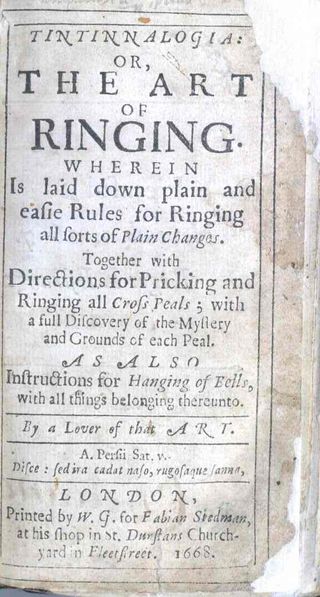 Stedman had collaborated with another ringer, Richard Duckworth, on Tintinnalogia but nine years later he produced (and again published) his own work on the subject Campanalogia, or the Art of Ringing Improv’d. The British Library holds first editions of both books. 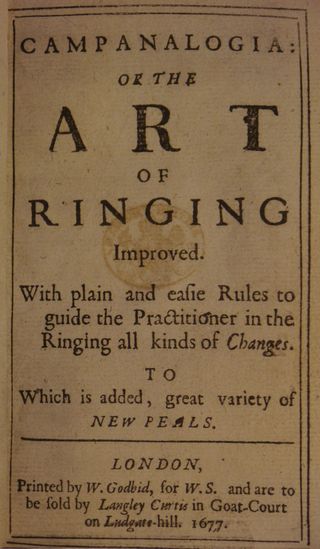 A wide variety of patterns can be formed this way – growing larger as you increase the number of bells. These patterns, known as ‘methods’, are the music of change-ringing, and Stedman was the first to produce printed versions which helped to codify them. Today ringers are used to seeing the methods printed, but in 1688 this was an innovation.

Some of the methods Stedman and Duckworth describe, such as Plain Bob and Grandsire, are familiar to modern ringers, but others are less so and have intriguing names such as ‘the whirligigge’, ‘the wild-goose chase’, ‘topsie-turvie’ or ‘a cure for melancholly’.

But it is the method (for ringing pedants actually a ‘principle’) which bears Stedman’s own name which keeps that name alive more than anything else for today’s ringers. It appeared for the first time in Campanalogia and will of course be the method most bands will choose to ring for the tercentenary. You can see and hear it rung on 12 bells here. 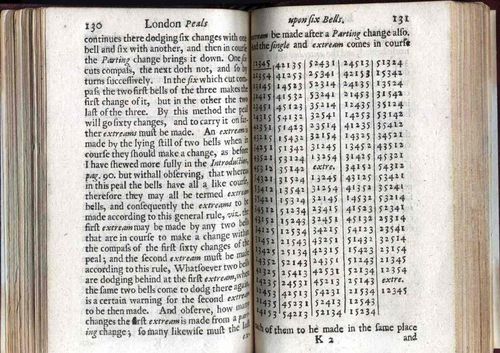 ‘Stedman’s principle’ on five bells, as printed for the first time in Campanalogia (1677) – and as still rung today

If you fancy following, however humbly, in Stedman’s footsteps, most bands of ringers welcome new recruits, and I can heartily recommend the exercise. You can find out more on the website of the Central Council of Church Bell Ringers.

Posted by Sandra Tuppen at 9:00 AM

Actually the ringing is on 12 bells, not 10 (Cinques is 11 bells changing with one bell always coming last, Caters is on 9)

My typo entirely and I only realised after the blog was posted. It's now been corrected!