Four hundred years ago, the first attempt to print a book of music for keyboard was made in England. This landmark publication was Parthenia or The Maydenhead of the first musicke that ever was printed for the Virginalls. The British Library holds two copies of the first edition, and a further six copies are known to survive in other libraries around the world. 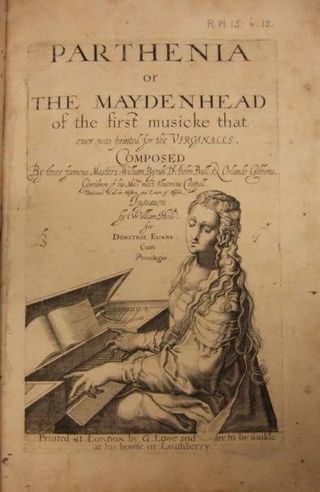 Parthenia or The Maydenhead of the first musicke that ever was printed for the Virginalls. Shelfmark R.M.15.i.15.

Last night we celebrated the 400th anniversary of Parthenia's publication with a lecture-recital at the British Library, hosted in collaboration with the Royal Academy of Music. It was a sell-out event, and featured performances on three instruments from the time of Parthenia: the virginals (a delicate-toned keyboard instrument, pictured on Parthenia's title-page, above), the dulcimer and the Renaissance fiddle or lira da braccio.

Oliver Neighbour, leading scholar of the music of William Byrd and former head of music at the British Library, talked about the background to Parthenia's publication and the music it contains. He also shed light on some of the social niceties of the time. While the virginals would have been played at court and in high-ranking households, the dulcimer was considered a lower-class instrument.

The music in Parthenia was written by three of the greatest English composers then living: William Byrd, John Bull and Orlando Gibbons.  Each was from a different generation, Byrd having been born in about 1540, Bull in about 1562 and Gibbons in 1583.  Colin Huehns, lecturer at the Royal Academy of Music, selected music by all three composers for yesterday's recital, in which the principal role was taken by Royal Academy of Music student Martyna Kazmierczak, playing the virginals.

Although all the music in Parthenia was composed for solo virginals, Colin experimented with adding a Renaissance fiddle to the texture in some of the pieces.  It may not have been what the composers originally intended, but adapting music to suit all kinds of instruments was a very common practice in the 17th century, and the effect was certainly interesting. 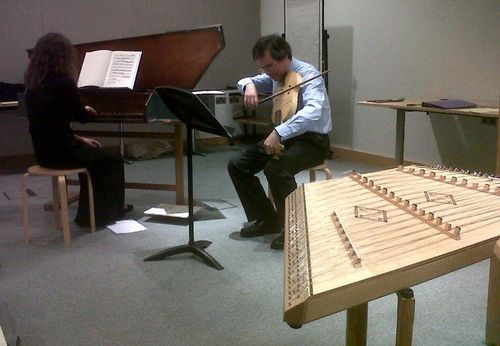 The final two pieces, played by Colin Huehns and Elsa Bradley respectively, were performed on the dulcimer.  Colin reprised Byrd's 'Preludium no. 1' from earlier in the evening, and it was interesting to hear how the work sounded on an instrument with a quite different sonority from the virginals.

The virginals used in the recital was an original Renaissance instrument kindly loaned by the Royal Academy of Music from their collecton of historic instruments, while the fiddle and dulcimers were modern replicas of early instruments. On display were a copy of Parthenia and several related items and, at the end of the evening, the audience had a chance to have a close look at these and at the musical instruments.

Why is Parthenia important?

Printers in Italy, Germany, France and England became highly proficient at printing music from moveable type during the 16th century.  But this kind of printing, in which each note - with its own staff lines  - sits on a separate piece of type, was not suitable for the fast notes and chordal writing found frequently in keyboard music.  Music for keyboard therefore continued to be transmitted in manuscript. The most magnificent example of these manuscripts is 'My Ladye Nevells Booke' (MS Mus. 1591), compiled by the scribe John Baldwin in 1591, which contains music by a single composer, William Byrd. 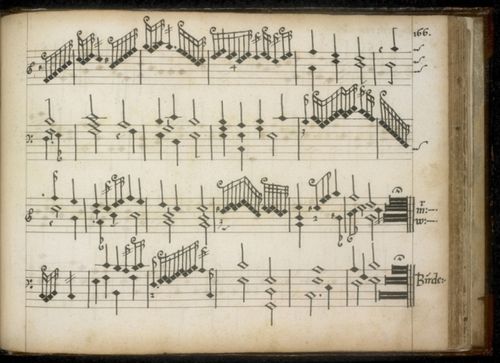 By the early 17th century, engraved music - created by engraving each page of music onto a metal plate and printing from this - was becoming more prevalent, and it was only a matter of time before an attempt was made to engrave complex keyboard pieces.  Here is a typical page of music from Parthenia: 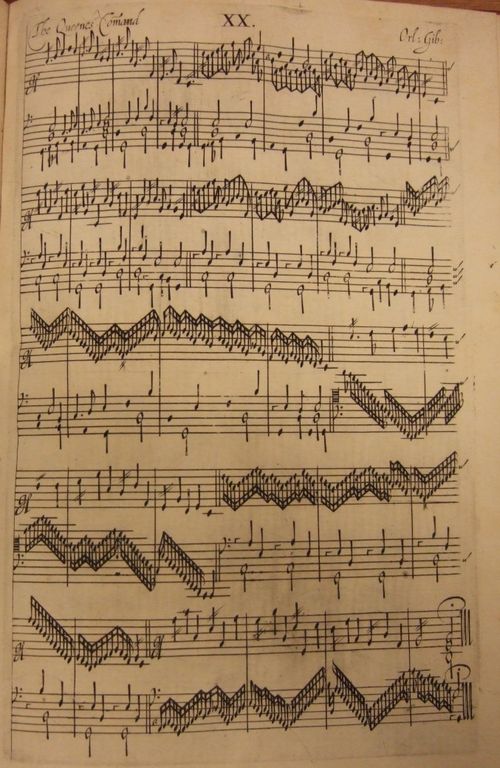 Music by Orlando Gibbons from Parthenia

The above runs of semiquavers would have been very difficult to produce using moveable type.

It is somewhat ironic, as Oliver Neighbour observed during his talk last night, that by the time such an innovative publication as Parthenia appeared, the high point in the development of English Renaissance keyboard music had passed.  However, interest in 16th-century keyboard music - and indeed in Parthenia - continued well into the 17th century.  The music was reprinted several times - in 1651 with a somewhat more demure female performer on the title-page.

The publication was then all but forgotten until the 19th century, when the enterprising Musical Antiquarian Society produced a new edition.  Since then, the music has been re-published in facsimile, in modern scholarly editions and in arrangements for other instruments, including recorders, flutes and keyboard and cello, and it has also been recorded many times. Four hundred years on, the music from Parthenia remains vibrant and engaging.

Posted by Sandra Tuppen at 4:12 PM