The Countess of Yarmouth’s Fancy

Among the Ten New Fashionable Irish Dances published by the dancing master Alexander Wills around 1800 is the ‘Countess of Yarmouth Fancy’. Who was the Countess of Yarmouth and why should she have not just this dance but this whole collection of dances dedicated to her?

Alexander Wills had a long career as a dancing master in London. The Morning Post and Daily Advertiser for 12 April 1779 carried a notice for ‘his first ball … at the New Rooms, Hanover-square’ when he described himself as ‘late assistant to Mr. Gallini’ - Giovanni Andrea Gallini who was dancing master at the King’s Theatre, London’s opera house. Wills advertised his annual ball and his academy ‘for young Ladies only’ regularly thereafter. He was apparently still in business late in 1801, for the Morning Chronicle for 7 November 1801 advertised ‘Wills and Second’s Academy, … for Young Ladies of Distinction’. No further advertisements have so far been found, but Wills evidently had a genteel and well-heeled clientele.

The Countess of Yarmouth must surely be Maria Emily Fagnani (1770/71-1856), who on 18 May 1798 married Francis Charles Seymour-Conway Earl of Yarmouth (1777-1842), son and heir to the second Marquess of Hertford. Her mother was the Marchesa Fagnani, and it is likely that her father was the fourth Duke of Queensberry. The new Countess of Yarmouth was the Duke’s designated heiress. The marriage took place against the will of Lord Yarmouth’s parents and it did not last.  The Earl and Countess of Yarmouth parted for good during a visit to France in 1802. The undated Ten New Fashionable Irish Dances must have appeared during the brief period of their marriage. The publication was registered at Stationers' Hall on 28 May 1800 and probably appeared in print shortly afterwards.

Despite her doubtful paternity and the circumstances of her marriage, the Countess of Yarmouth was worth cultivating as a patron. She had money. In 1791, she had been left more than £30,000 (several million pounds in today’s money) by her adoptive father the politician George Selwyn. She was also a member of fashionable society. Her attendance at balls, masquerades and other diversions of the bon ton was noted in the newspapers. Alexander Wills may already have attracted her patronage or had good hopes of it. ‘Countess of Yarmouth Fancy’ is the first dance in the volume and one of only three which have dance instructions as well as music. 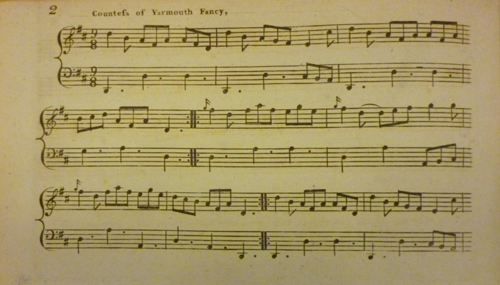 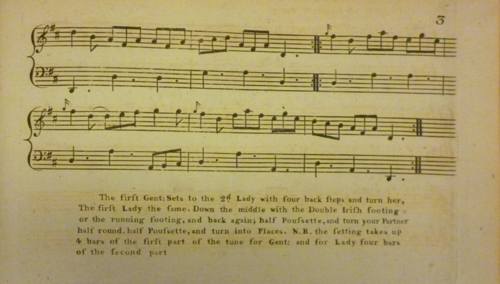 Posted by Sandra Tuppen at 4:39 PM