A song in praise of music: Schubert’s ‘An die Musik’

This is the first in a new series of blog posts highlighting some of the British Library’s music treasures. We’ll be focusing in each post on a particular item or collection and looking at the story behind it. In the spotlight today are Franz Schubert, born on this day in 1797, and his exquisite song ‘An die Musik’ (‘To Music’).

Schubert composed more than 600 songs in his short life, the first at the age of 14 and the last shortly before his death, aged 31, in November 1828. ‘An die Musik’, which Schubert wrote in 1817, is one of his most famous songs, popular both for its beautiful melody and its lyrics - penned by Schubert's near namesake, Franz von Schober - about the power of music to “kindle the heart to warm love” and carry us into a better world.

Here is a classic recording of the song made for Decca by Kathleen Ferrier, contralto, and Phyllis Spurr, piano, in 1949 (British Library Shelfmark 1CS0042998):

Schubert wrote two versions of the song, and his autograph manuscript of the second version is now held by the British Library. The manuscript was formerly owned by the Austrian writer and collector Stefan Zweig, and Zweig’s delight at acquiring the autograph of this famous song is evident from his card catalogue, in which he described it as a crowning piece in the art of song and also graphically extraordinarily beautiful. 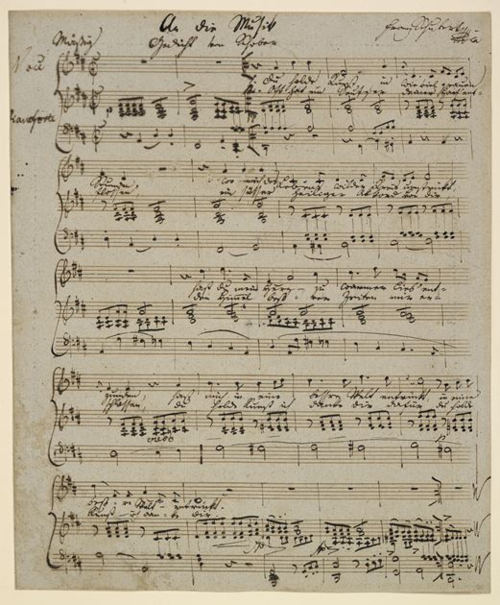 Schubert wrote out the music in brown ink on just one side of a single leaf of manuscript paper and signed it ‘Franz Schubert m[anu propr]ia’ (signed with one’s own hand). The leaf seems originally to have formed part of someone’s manuscript album, but it is not known where or for whom Schubert wrote the music out. The leaf was later removed from the album and came into the possession of a German violinist, Ludwig Landsberg, who had it mounted in a pink folder, along with a lithographed portrait of Schubert, and who presented the assemblage to the wife of the French Ambassador in 1852. 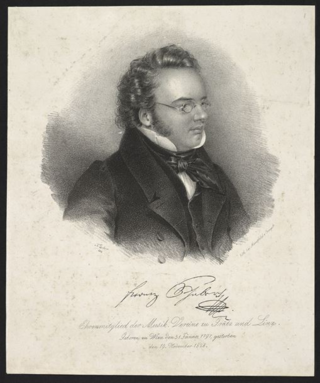 The manuscript then passed through the hands of a German conductor, Siegfried Ochs, before being acquired in 1940 by Stefan Zweig from the music seller Otto Haas. The manuscript was loaned to the British Library in 1981 and presented outright to the Library in 1986 by Stefan Zweig’s heirs, as part of the magnificent Zweig Music Collection. The manuscript has just been digitised and made available on the British Library's Digitised Manuscripts website. The presentation folder and portrait, a lithograph made by Josef Teltscher in 1826 and published shortly after Schubert's death, have also been digitised.