Music, Print and Culture in the 16th and 17th Centuries

The British Library and the Music Department at Royal Holloway, University of London, are pleased to announce a three-year PhD Studentship under the AHRC Collaborative Doctoral Partnership (CDP) Scheme, to commence 22 September 2014. The successful applicant will receive full funding (tuition fees; maintenance payment of ┬Ż15,863 for 2014/15, increasing annually), plus associated expenses (┬Ż550 yearly maintenance payment from AHRC; up to ┬Ż1,000 per annum from the British Library to cover travel and related costs). 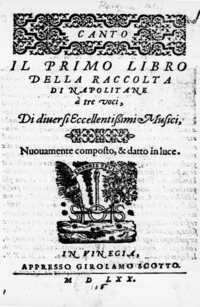 This PhD will focus on the British LibraryŌĆÖs holdings of 16th- and 17th-century printed music, which are among the largest in the world. About 320 items of its 16th-century printed music were digitized in 2011 by Early Music Online (EMO), a previous collaboration between Royal Holloway and the British Library. As part of this project, the catalogue records were enhanced to provide inventories, detailing every individual musical work in each volume for the first time. This has opened up the collections to in-depth exploration, and the EMO digital collection is now used by scholars and performers worldwide. The present studentship offers an opportunity to build on the work of EMO, by analysing the items already digitized and by enhancing the catalogue records for music editions that still await digitization.

This Partnership offers a collaborative supervisory team that brings together Royal Holloway musicologist Dr Stephen Rose with the Curator of Printed Music at the British Library, Dr Rupert Ridgewell. The successful candidate will profit from the academic and practical resources of both partner institutions, becoming a full participant in the international community of research students at Royal Holloway while also having the opportunity to gain first hand professional experience of curatorial work at the British Library in London, including cataloguing, digitization, conservation and exhibitions work.

The student will be allocated office space in the Library and be able to participate in the Library's rich programme of public events, study days and student seminars and to disseminate research findings to academic and non-academic audiences. The student will be expected to contribute to the re-cataloguing of 16th- or 17th-century printed music relevant to his/her research area. In the longer term, the blend of academic research and curatorial work should considerably enhance employment-related skills while inspiring a project with considerable potential for knowledge exchange and public impact. 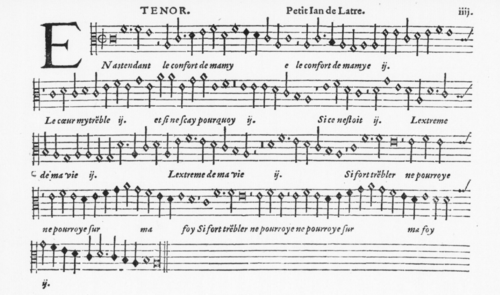 With the proviso that applicants must plan their research with a view to making substantive use of the British LibraryŌĆÖs collections of 16th- and 17th-century printed music, they are welcome to shape the precise proposal according to their own interests, skills and initiative. Possible research questions may include:

ŌĆó How did printers, editors and publishers shape and meet the new market for printed music in Europe in the 16th century?

ŌĆó How did print allow music and musical ideas to be shared and disseminated across different regions of Europe?

ŌĆó How were foreign musical works translated or adapted in the receiving nations to cater for changed cultural tastes?

ŌĆó How did music-printing contribute to the identities of religious denominations in the Reformation, Counter Reformation and the religious conflicts of the 16th and 17th centuries?

ŌĆó Which musical works and genres were most popular in early modern printed anthologies, and why?

ŌĆó What do the formats and paratexts (e.g. dedications, prefaces, indexes) of the printed books reveal about how publishers negotiated patronage systems and the market in order to sell music?

ŌĆó How was printed music owned and used, for instance by performers, institutions, collectors and antiquarians?

Applicants must have a first degree in an appropriate subject (minimum II.i), and a MasterŌĆÖs degree or other professional experience relevant to the scope of the project. The ability to read music notation is essential. The student will be based in London.

Posted by Rupert Ridgewell at 5:32 PM

In this post, Moira Goff, Curator of the British Library's Georgians Revealed exhibition, delves into the Library's music collections in search of dances performed by upper-class Georgians.

Many of the collections of country dances and minuets published in the late 18th century included tunes named for individual aristocratic female dancers.  The most famous of these was the Devonshire Minuet, composed in honour of Georgiana Duchess of Devonshire and first performed by Adelaide Simonet and Gaetan Vestris at a ridotto held at the KingŌĆÖs Theatre in London on 22 March 1781. The Morning Herald and Daily Advertiser for 24 March reported at length on the event, noting in particular the brief attendance of the Duchess who sat in her box rather than joining the company. For ŌĆśher Grace was only there to pay a kind of public visit to the Vestris, for the Devonshire minuet, which was received with a very warm applause, and was no sooner over than the Duchess disappearedŌĆÖ. The Devonshire Minuet was subsequently performed several times at the KingŌĆÖs Theatre as part of the ballet Ninette ├Ā la Cour, in which the two dancers were starring. The music was published the same year in Giovanni Battista NoferiŌĆÖs The Celebrated Dances Performed by the Messrs Vestris &c. at the KingŌĆÖs Theatre. The copy now in the British Library appears to have been used in performance, as the harmony has been filled out in places in ink. The Devonshire Minuet also appeared separately in various arrangements suitable for music-making and dancing at home. 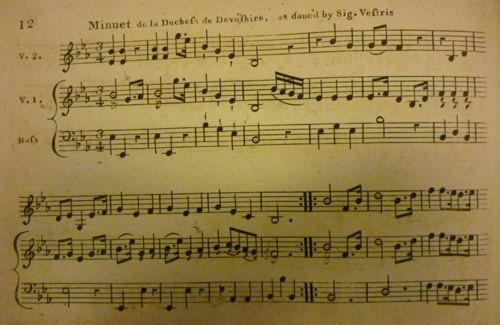 The Duke and Duchess of Devonshire were noted for their lavish entertainments at Devonshire House in LondonŌĆÖs Piccadilly. The ŌĆśDevonshire GalaŌĆÖ given on 21 March 1782 was reported in detail in the Morning Herald and Daily Advertiser for 22 March. The luxurious and elegant decorations of the hall and adjacent rooms were fully described.  ŌĆśThe Grand Hall was fitted up in the most superb stile, converted into la Salle au BalŌĆÖ, with an antique statue of Apollo and fine paintings set off by festoons of roses and a myriad candles. The ŌĆśsopha for the Royal Family, and the rest of the furniture was rose coloured damask; a raised flooring, and temporary orchestra were constructed; the orchestra was in divisions on each side the Apollo statueŌĆÖ. The Morning Herald and Daily Advertiser did not comment on the dancing at the ball until 30 March:

Of minuets, at least as danced by Amateur performers, none was ever more commended than the minuet, at the Devonshire Gala, of the Prince of Wales, and the Duchess of Devonshire.

The Minuet next in point of order, thoŌĆÖ not of merit, was danced by the Duke of Devonshire and Lady Caroline Spencer. His Grace is an amiable and respectable character; but dancing is not his forte.

The newspaper commented only on Lady CarolineŌĆÖs beauty. The report shows that formal balls of the late 18th century still opened with a series of minuets, danced one couple at a time in order of rank, just as they had been nearly 100 years earlier.

Georgians Revealed: Life, Style and the Making of Modern Britain is on until 11 March 2014.