Plainsong and Medieval Music Study Day at the British Library

The British Library is delighted to host this year's Annual Study Day of the Plainsong and Medieval Music Society, on Saturday 29 March 2014.

Open to all with free admission, this day will provide a major showcase of some of the important and exciting work currently being undertaken on the British Library's important collections of medieval and Renaissance music manuscripts. 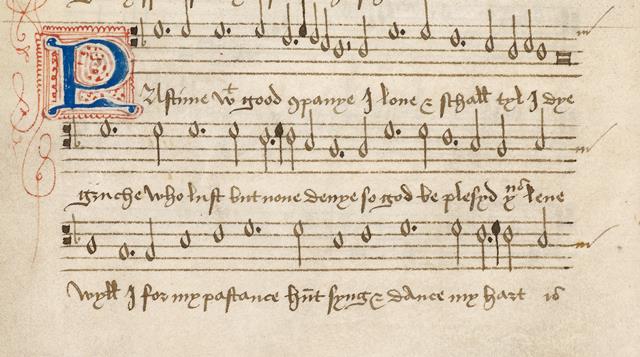 The first session of the morning, starting at 10.30, will be devoted to Tudor manuscripts. David Fallows will present some of the exciting new discoveries he has recently made about the famous Henry VIII Book (Add. MS 31922, shown above). Thomas Neal will talk about Royal MS 8 G.vii, A Burgundian manuscript in early Tudor England, and Louise McInnes will speak about the Windsor carol book (Egerton MS 3307). 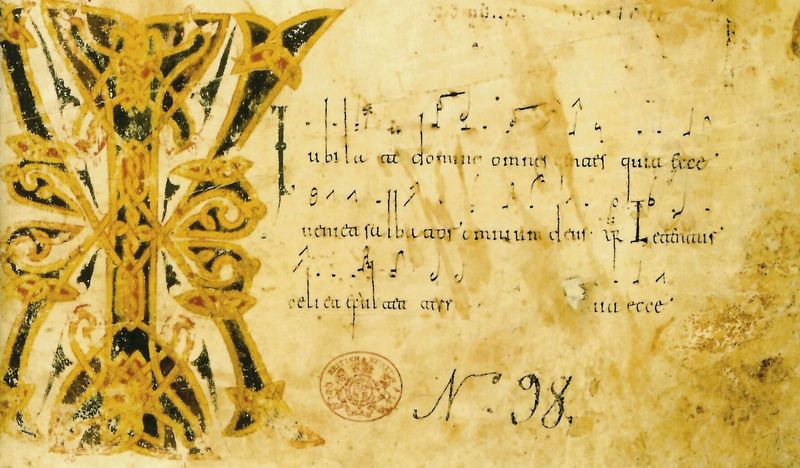 Before lunch, four speakers from the Old Hispanic Office Project at the University of Bristol will discuss various aspects of the liturgy and chant of the Iberian Peninsula in the early medieval period. Surprisingly, one of the largest collections of early Spanish chant manuscripts is found in the British Library, and this presentation by Emma Hornby, Elsa De Luca, Raquel Rojo Carrillo and Kati Ihnat will centre on some of these manuscripts.

In the afternoon, William Flynn will talk about an important but little-studied British Library manuscript of Hildegard of Bingen's writings, and two leading liturgical experts, Magnus Williamson and Matthew Cheung Salisbury, will give presentations about some of the sources of the Sarum Rite to be found in the Library's collections.

The day will conclude with an opportunity to see some of the manuscripts under discussion earlier in the day. Doors open at 10 for a prompt 10.30 start, and the event will finish by 4.30. The Study Day will take place in the Foyle Suite at the British Library Centre for Conservation, towards the back of the main Library building at 96 Euston Road. Lunch will be available in the Library's restaurant and cafÃ©.

Attendance is limited to 60 people, and anyone wishing to attend is asked to register your intention to attend here: http://doodle.com/2que4gxew7rzhv6e.

For further details, and to download the programme for the day, please visit the Plainsong and Medieval Music Society website at www.plainsong.org.uk. Founded in 1888, the PMMS exists to promote the performance and study of liturgical chant and medieval polyphony, through the publication of editions, facsimiles and scholarly articles, and through educational and liaison events. This Study Day will also include the Annual General Meeting of the Society. New members are always welcome, and can join on the day. Membership includes a subscription to the Societyâ€™s twice-yearly journal and discounts on many of the Society's publications.

â€˜The Decca Record Company of the 1960s and 1970s: the legacy of Christopher Raeburnâ€™

The Music Department at the University of Sheffield and the British Library are pleased to announce a three-year PhD Studentship under the AHRC Collaborative Doctoral Partnership (CDP) Scheme, to commence 1 October 2014. The successful applicant will receive full funding (tuition fees; maintenance payment of Â£15,863 for 2014/15, increasing annually), plus associated expenses (Â£550 yearly maintenance payment from AHRC; up to Â£1,000 per annum from the British Library to cover travel and related costs).

The subject of this studentship will be the Christopher Raeburn papers, recently acquired by the British Library. Christopher Raeburn pursued a lengthy career as a record producer, initially with the Decca Record Company, working globally as a member of the Decca production team with conductors and orchestras of the highest calibre, and then as a freelance producer, in which capacity he masterminded the careers of several of the finest of todayâ€™s musicians.

The archive of his papers held by the British Library covers the whole of his career and is extremely detailed, enabling a large range of subjects to be considered for primary research by candidates. Applicants for this studentship are welcome to shape the precise proposal according to their own interests, skills and initiative. Points of enquiry may include amongst much else:

This Partnership offers a collaborative supervisory team that brings together Sheffield Universityâ€™s Dr Dominic McHugh and Dr David Patmore, both of the Universityâ€™s Department of Music, and, from the British Library, Dr Nicolas Bell, the Curator of Music Collections and Jonathan Summers, the Curator of the Classical Music Sound Archive. This will be the third collaborative partnership in the field of the history of the recording industry between the British Library and the University of Sheffield.

The successful candidate will profit from the academic and practical resources of both partner institutions, becoming a full participant in the vibrant research community at the University of Sheffield while also having the opportunity to gain first hand professional experience of curatorial work at the British Library in London, including cataloguing, digitization, conservation and exhibitions work. The student will be allocated office space in the British Library and will be able to access the British Libraryâ€™s Sound Archive, as well as its extensive collection of printed materials including books, journals and magazines relevant to the subject. In addition they will be able to participate in the Library's rich programme of public events, study days and student seminars and to disseminate research findings to academic and non-academic audiences. The student will be expected to contribute to the re-cataloguing of the Raeburn papers, on the basis of 60 days per year for three years, work which in the past has proved to be invaluable in gaining deep and relevant archival knowledge. In the longer term, the blend of academic research and curatorial work should considerably enhance employment-related skills while simultaneously informing the project with great potential for knowledge exchange and public impact.

The deadline for receipt of applications (including two references) is 31 March 2014.

For further information, and details of how to apply, see: https://www.sheffield.ac.uk/music/prospective_pg/ahrcstudentship

Despite her fatherâ€™s disapproval, Ethel Smyth set her heart on a career as a professional composer. She studied in Germany, where she got to know Brahms, Grieg and Clara Schumann, and on her return to England focused her energies on composing operas. But Smyth struggled to get her operas performed in Britain, at a time when it was unusual for women to take up composition as a career, and when women who did compose tended to produce small-scale pieces, such as songs for performance at home. Smyth had rather more success in Germany, where she had three operas premiered, including her most famous stage work, The Wreckers, a tale of 18th-century Cornish villagers luring ships onto rocks to plunder their cargo. Throughout her life, Ethel Smyth fought for the rights of women. She met the suffragette Emmeline Pankhurst in 1910 and joined the campaign to gain women the vote. (Smythâ€™s song The March of the Women became an anthem for the suffrage movement.)  She also campaigned for women to be allowed to play in professional orchestras.  As late as 1933, in a book called Female Pipings in Eden, Smyth could report that in the ranks of the London Symphony Orchestra, the Philharmonic Orchestra, and Manchesterâ€™s HallÃ© Orchestra the only female to be seen was the occasional second harpist.  At the BBC, which did admit women players, female cellists were banned.  This, Smyth surmised, was because grasping a cello between the knees was considered unseemly.

Smyth made no secret of the fact that she was a lesbian, and she formed passionate relationships with several women.  The letters newly acquired by the British Library were written to another professional woman, Agnes Ethel Conway, and to Agnesâ€™s father, Martin Conway. Agnes Conway was an archaeologist and historian who undertook extensive research in the Middle East. She also travelled in Greece and Turkey and in 1917 published an illustrated book about her travels entitled A ride through the Balkans, on classic ground with a camera.

Smyth wrote about her own travels in 1925 in A Three-Legged Tour in Greece.  Two years later, Martin Conway, an art historian and mountaineer, sent Smyth a copy of his daughterâ€™s book, and Smyth wrote a series of enthusiastic letters to the Conways. Corresponding first with Martin Conway, Smyth revealed how enthralled she was with the book - despite being â€˜in a bad knot of workâ€™ and not having much time for reading. She then began writing to Agnes Conway, and in these letters there are some glimpses of Ethel Smythâ€™s strong personality.

In the first letter, Smyth reports that she would have loved to have been an archaeologist, despite having made gibes at the profession as represented by men! There is also a note of asperity: she emphatically points out that a view of the sea described in Conwayâ€™s book would really not have been possible from that particular spot. Later there are references to Smythâ€™s ill-health (she started losing her hearing in her fifties); she writes of taking a cure in Breconshire, and of time wasted on her â€˜vile bodyâ€™.  Plans were made for Smyth and Conway to meet, though Smyth writes in haste on 1 Nov 1927 of trying to finish a â€˜job oâ€™workâ€™ â€“ probably her concerto for violin and horn. Oh, and she continued to dispute the veracity of Conwayâ€™s description of that sea view.

Posted by Sandra Tuppen at 9:45 AM