250 years ago, on 23 April 1764, the eight-year-old Wolfgang Amadeus Mozart arrived in London with his father Leopold, mother Anna Maria, and sister Maria Anna (Nannerl).  The visit formed part of an ambitious European tour, in which the Mozart children were presented as musical prodigies in public concerts and to private patrons.

Their visit to London, which would last for 15 months, has special significance for the British Library, since Mozart may be counted as the first in an illustrious line of composers to have presented manuscripts to the Library.  This event took place during the course of the family's visit to the British Museum, in July 1765.  On that occasion, Mozart deposited a copy of his first sacred composition (and only setting of an English text), God is our Refuge, written with the assistance of his father Leopold, together with copies of two sets of keyboard sonatas published the previous year in Paris. 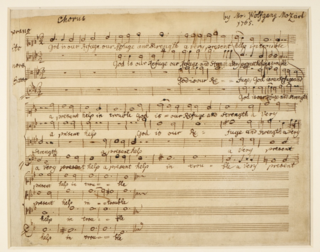 Since that time, the Library has maintained a long tradition of collecting printed and manuscript sources for Mozart’s music, cultivated both under its previous guise as part of the British Museum and in its present incarnation as an autonomous library based at St. Pancras.

The Library’s Mozart holdings have therefore grown apace, with items acquired individually from dealers and at auction, via the legal deposit of music published in the UK, and as part of larger collections – notably those amassed by Vincent Novello, Edward Meyerstein, and Stefan Zweig.

The most spectacular single acquisition came in 1986, with the donation by Stefan Zweig’s heirs of his collection of musical and literary autographs, which contained among other treasures twelve Mozart manuscripts.  Most notable among these is the thematic catalogue ('Verzeichnüss aller meine Werke vom Monath febrario 1784 . . .') that Mozart maintained from 1784 till his death in 1791, in which he noted - among other details - the date, title and first few bars of music for each work.  In 2006, this rich and revealing document became the first of the Library’s Mozart sources to be digitised and was made available via the Turning the Pages website to mark the composer’s 250th anniversary.  It is also available as an e-book and via the Library's Digitised Manuscripts portal.

The Library has now digitised the remaining Mozart autograph manuscripts in its collection. For ease of reference, we thought it would be helpful to provide the following classified list with a brief title or description of each work and a hyperlink (embedded in the shelfmark) to the digital images.  Unless otherwise specified, the manuscripts are full autograph scores of the respective works.

For anyone curious to explore a little further, click on the Köchel numbers for links to the relevant entries in Wikipedia (where available), where you'll also find links to public domain recordings and editions available from the Neue Mozart Ausgabe and the International Music Score Library Project.  Using these resources will make it possible to compare Mozart’s notation with various editions, or to follow the composer’s score while listening to a recording in the comfort of your own home.

Keyboard music (with or without accompaniment)

Posted by Rupert Ridgewell at 2:11 PM