Preserving the legacy of Muriel Herbert

One of the most rewarding aspects of working in the British Library's Music department is having the opportunity to preserve music which could otherwise have been lost to the world. It is even more rewarding when that music turns out to be exceedingly good. The songs of British composer Muriel Herbert are just such a case in point.

Muriel Herbert died 30 years ago today, at the age of 86, leaving behind almost 100 songs and a small number of pieces for violin and piano. She had been born in Sheffield in 1897 and grew up in Liverpool, and in 1917 won a composition scholarship to study at the Royal College of Music with Charles Stanford. After leaving the Royal College she remained in London, composing, teaching and giving recitals. She met the composer Roger Quilter, who recommended her to the publisher Augener, and during the 1920s she had several songs published by Augener and Elkin. 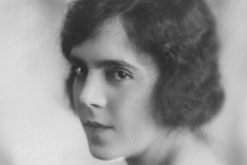 The poets whose words Herbert chose to set ranged from the eighth-century Alcuin of York to James Joyce, and also included, among many others, Robert Herrick, Lord Byron, Christina Rossetti and Thomas Hardy. She seems to have been particularly inspired by James Joyce's poetry, setting four of his poems. She performed two of them, ‘I Hear an Army Charging’ and ‘Lean out of the Window’, in Paris for Joyce himself.

Herbert's performances of her own music appear to have been well received. This undated cutting relates to a recital she gave at the Sandon Music Room in Liverpool, where she sang and accompanied herself on the piano.

Review of a performance given by Muriel Herbert in Liverpool

Herbert also gave several broadcast recitals on BBC radio, including this recital in 1938. Sadly, no recordings of any of Herbert's recitals appear to have survived. 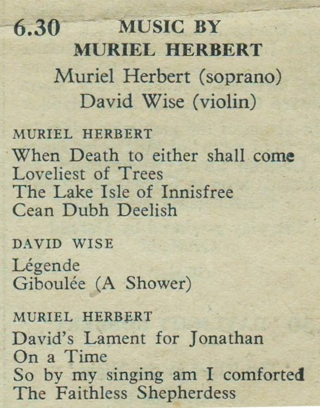 Herbert had continued to compose throughout the 1920s, but then came marriage and motherhood, and subsequently the breakdown of her marriage, and she found less time for composition. She moved with her two children to Welwyn Garden City, where she became a respected music teacher. At her death, most of her works remained unpublished, preserved only in her neatly-written autograph manuscripts, in most cases in a single copy.

Muriel Herbert's younger daughter, the writer Claire Tomalin, was determined that the music should be preserved. As she later wrote in the Guardian, she searched out every scrap of music she could find and bundled all the manuscripts into folders. Although no one seemed interested initially, a BBC producer, Bill Lloyd, who had been taught by Herbert, suggested recording some of the songs. The musicologist Valerie Langfield also gave help and encouragement, and in 2009 the premiere recording was issued to great acclaim by Linn Records with singers James Gilchrist and Ailish Tynan and pianist David Owen Norris. You can hear clips from these songs on Linn's website, and listen to Claire Tomalin talking about her mother's music on Woman's Hour in 2009 on the BBC website.

We were delighted when Ms Tomalin decided to present the much-treasured collection of music manuscripts to the British Library. When we received them, some of the manuscripts were in a fragile state, fraying around the edges and in need of conservation. They have now been catalogued, conserved and bound into sturdy volumes to prevent further damage.

Thirty years on from Muriel Herbert's death, it seems that her legacy is rather more secure; other recordings and performances are in the pipeline, some of her unpublished songs have been printed for the first time and her autograph manuscripts are now available for present and future generations of performers and researchers to explore at the British Library, where they have the collection number MS Mus. 1724.

Posted by Sandra Tuppen at 4:41 PM

I have been very touched by some of Muriel Herbert's songs and would love to sing them myself. Could anybody please advise me on how to obtain a copy of Muriel Herberts I hear an army charrching? Any help would be much appreciated. Thanks!

I believe 'I hear an army charging' is shortly to be published by BiblioFox Music, http://www.bibliofoxmusic.co.uk/composers/muriel-herbert/