Fifty years ago, Iso Elinson died at the age of fifty-six during the interval of a charity concert at King’s College, London.

Born in Mogilev, Russia, Elinson was the youngest of ten children.  After studying the piano with his mother (herself a pupil of Anton Rubinstein) at the age of four Elinson enrolled at the St Petersburg Conservatory where he continued with Felix Blumenfeld (the teacher of Vladimir Horowitz) and took composition classes under Alexander Glazunov.  In 1922 the famous Russian composer wrote a glowing report when Elinson left:

‘This is to certify that Mr Isaac Elinson entered the Conservatory in 1911, having displayed a musical gift of genius. Under my tutorship in the years 1917–1919 he thoroughly studied all the musical literature. He graduated brilliantly in composition in 1920. He possesses both a remarkable and skilful technique in piano playing and a genius for artistic musicality. In the might of his talent and performance he is truly a follower of Franz Lizst.  Therefore I consider his musical education to be complete.'

In 1927 at the age of only twenty, Elinson performed all thirty-two of Beethoven’s piano sonatas in Leningrad, Moscow and Kazan to celebrate the centenary of the composer’s death and in 1929 played the complete Wohltemperierte Klavier in Berlin.  It was in that city that he befriended Albert Einstein who in March 1930 provided a testimonial to serve Elinson as a passport, in which he referred to ‘his God-given artistic gifts and his pure child-like face’.

After his London debut at the Wigmore Hall in 1933 Elinson appeared regularly in Britian often appearing with Henry Wood, John Barbirolli and Thomas Beecham.  He took British citizenship in the mid-1930s and in 1938 made his debut in New York.

Elinson performed regularly in Britain, often two or three concertos with orchestra in one concert, and in the 1950s and early 1960s gave Chopin recitals at the Royal Festival Hall.  It was at this time that he made a number of LPs for Pye records of Chopin's Etudes and Preludes.  A disc of Beethoven Sonatas was issued posthumously as was one of the Handel and Paganini Variations by Brahms.

It is a little known fact that Elinson made two 78rpm discs during his visit to Berlin in 1929-1930 for German Columbia.  Only issued in Germany at the time, I was delighted to be offered one of these extremely rare discs for the British Library by Elinson's grandson Matthew Brotherton.  The only problem was that the disc was broken in half.  However, with state of the art restoration techniques here at the British Library Conservation Centre, engineer Tom Ruane was able to digitise and preserve the disc. 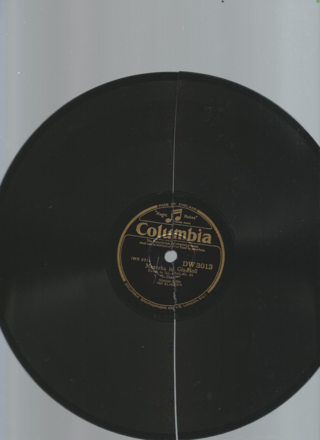 Posted by Jonathan Summers at 4:25 PM