Music behind barbed wire in World War One

During the First World War many thousands of civilian men were interned as ‘enemy aliens’ on both sides of the conflict.  The story of their detainment is one of forced separation from homes and families, cramped and crowded conditions, isolation from society, and overt hostility from the outside world.   In the UK, internment camps were established to house mostly German, Austrian and Hungarian men, many of whom were married to British women and had been resident in the country for years.  The largest camp was on the Isle of Man, where up to 30,000 men were held, while smaller camps were setup at various locations in London and elsewhere. 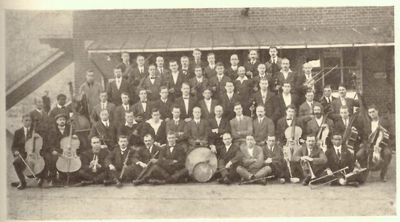 In Germany, up to 5,000 men were interned at a racecourse in Ruhleben, near Berlin.  They included many British citizens who had been resident in Germany, or were simply on holiday there, at the outbreak of the war.  In accordance with international treaties (such as the 1906 Geneva Convention), the interned civilians were permitted a certain degree of autonomy to organise their affairs and daily activities.  Over time numerous sporting, cultural, and educational activities took place, many of them organised by societies and committees formed within the camp to promote particular interests and pursuits. 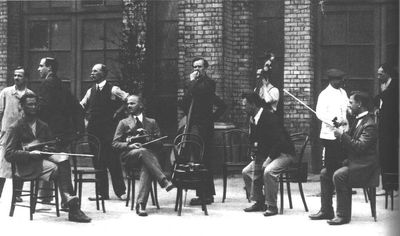 The British Library holds several unique collections of material relating to cultural activities that took place both at Ruhleben and at Alexandra Palace in north London, which was converted in the early stages of the war to accommodate over 3,000 prisoners.  Music represented an important and popular activity in both camps, and regular orchestral concerts were given through the war by the many professional and amateur musicians who were interned there. 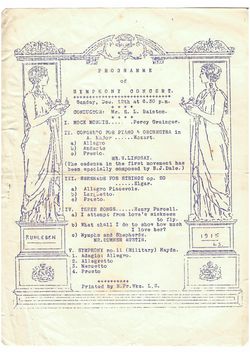 The concerts were not advertised beyond the perimeter fences, but programmes were printed and distributed in the camps, and some of them uniquely survive in the holdings of the British Library.  Among the musicians interned at Ruhleben were the composers Edgar Bainton, Arthur Benjamin, and Benjamin Dale, all of whom composed music for concert performance or to accompany theatrical events in the camp.  In 1916, for example, Bainton composed incidental music to a production of The Tempest, which formed part of a week-long festival to mark Shakespeare's tercentenary. 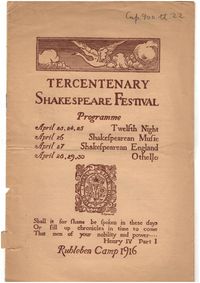 At Alexandra Palace, an orchestra was formed soon after the camp was established in 1915 under the direction of Anton Wüst, who had been employed as an assistant conductor at the Hippodrome Theatre in London up to 1914.  The orchestra, consisting of up to 40 players, would go on to give weekly concerts until the end of the war either in the Palace theatre, which seated up to 2,000 people, or in fine weather on the terrace.  The repertory ranged from Beethoven and Haydn symphonies, to excerpts from Wagner’s operas and waltzes or popular songs from operettas.  Wuest himself composed several songs and waltzes which were performed in the camp. 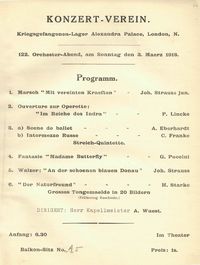 On Thursday 26 June, the concert 'A Captive Audience' inspired by the British Library’s collections will be given by the BBC Concert Orchestra at the Watford Colosseum.  It will feature music performed and composed in both of the camps, including Anton Wüst’s Alexandra Palace Ragtime, newly orchestrated from a copy of the piano score held by the Library.  Listen via the BBC iPlayer, either live or up to seven days after the concert.  Related material is also on display in the Library's free exhibition, Enduring War: Grief, Grit and Humour (until 12 October). 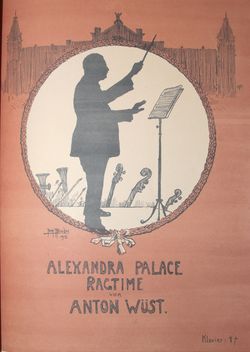 Posted by Rupert Ridgewell at 5:00 PM