Syriac Liturgical Music - From the Mountains of the Servants of God

The British Library has recently acquired field recordings made in two Syriac Orthodox monasteries in south-eastern Turkey by film-maker Nathaniel Daudrich and ethnographer George Richards. These recordings of Syriac Liturgical chant, searchable on our catalogue under collection number C1658 and available on Sounds, were made in 2011 and document one of the oldest existing forms of song, similar to the Western tradition of plainsong. In this guest blog post, we hear from the recordists themselves about the importance of these recordings and the process of making them.

Very few recordings of the liturgy of the Syriac Orthodox Church (a branch of Christianity established at Antioch, in modern Turkey, and which split from Rome and Constantinople in AD 451) have been made in situ in the remote monasteries of southern Turkey. These recordings may prove to be rarer still, in that they capture the essence of the Syriac language (a branch of the Semitic family of languages that also includes Arabic and Hebrew), the speakers of which were once in abundance across the Middle East, but who have now dwindled to a near-forgotten minority. The part of Turkey where these recordings were made is still called Tur Abdin - the Mountains of the Servants of God - but the two monasteries, Deyrulzafaran and Mor Gabriel, are among the very last islands of the Syriac people in Turkey. 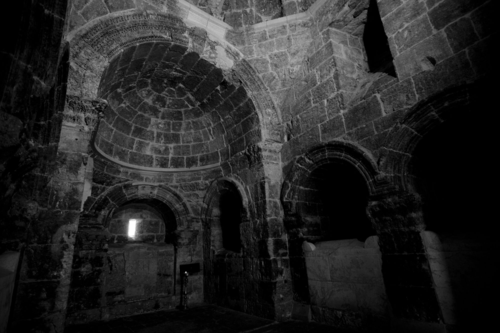 A chapel at the Monastery of Deyruzafaran. Photo credit: Nathaniel Daudrich

In 2011, we travelled from Istanbul to Diyarbakir, a large Kurdish city in south-eastern Turkey. The Arab Spring was spreading through the countries to the south, and the conflict between the Turkish state and Kurdish separatists was rumbling on. From Diyarbakir, we drove at night-time with a Kurdish farmer to Deyrulzafaran, the Saffron Monastery, in the mountains behind Mardin. There, we were welcomed by a monk, wrapped in a black cloak, and taken by moonlight through the courtyards to a small dormitory room.

We were woken the next morning by the bell for prayer. The sun had cast a warm glow over the yellow stone of the monastery, from which it takes its name, and we were led sleepily by a young orphan boy to the chapel. Inside, the walls were whitewashed, with a few embroidered drapes, and sunlight pouring in through a window behind our heads. Clouds of incense tickled our noses. We took a pew among some old men, tanned and flat-capped. The orphan-boy joined another in an alcove on one side of the chapel, while a tall farmer and a priest, wearing black robes, a long black beard and a white-and-black skull-cap, stood in the alcove on other side.

Then, the boys began to sing. They stopped, the two men replied with deeper voices, and then passed the song back to the boys, and so on, back and forth. As they sang on, into the chapel flowed a trickle of orphans, wiping sleep from their eyes, and farmers, brushing straw from their shoulders, and businessmen on their way to work, leaving briefcases at the chapel door. The boys and the younger men, or those with higher voices, joined the orphans; the older and bigger men joined the priest and the farmer. Soon, the alcoves were overflowing. As the service went on, the singers’ voices grew stronger - then, at the very peak, as we stood, half-asleep, hungry, and squinting through the sunlight and the incense, the chapel seemed filled with song.

Listen to an excerpt from Deyrulzafaran

These recordings represent an early step in the development of choral music from monophonic chanting, a single voice making one note at a time, to polyphonic, where different voices sing different notes in harmony. They demonstrate the call-and-response technique, a device that grew out of the structure of human speech, and which spurred on the development of more complex choral music.

It is intriguing to encounter, in these recordings, so early a step in the development of choral music preserved through time, like a living fossil. This is almost certainly the effect of the religious context of this musical tradition: the sanctity of the liturgy has inhibited any change. Without this preservatory effect, Syriac Orthodox chant would have evolved centuries ago and what we hear on the recordings would have been lost in time, cast aside like a snake sloughing its old skin. 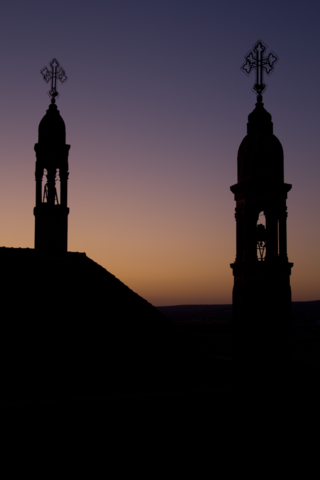 As significant as these recordings are in understanding the development of choral music, they are also an important reflection of the cultural and historical context in which they have been preserved. Traditions hold that the Syriac people - speakers of the Syriac language - are descended from the ancient Assyrian empire. Acknowledging the influence of early Jewish sacral music, the Hellenistic music, and, later, neighbouring Arabic song, Syriac Orthodox chant is descended, in spirit at least, from the song-poems of the ancient Assyrians.

Listen to an excerpt from Mor Gabriel

These recordings thus contend to be one of the oldest forms of music in the world: and in them we hear, perhaps, the strains of an ancient bard, singing to the glory of the court of Puzur-Ashur, King of Assyria, two thousand years before Christ.

You can listen to the full recordings on Sounds and read more about the expedition undertaken by George Richards and Nathaniel Daudrich. Follow George Richards on Twitter to receive updates on the project.

Posted by Andrea Zarza Canova at 10:14 AM