This blog has been quiet for a while, but plenty has been going on in the meantime. See the BBC News website for a report on a BL music manuscript presented to Henry VIII by the famous music scribe, spy and double agent Petrus Alamire, which has been recorded complete for the first time - and which reached no. 2 in the charts in the week it was released! We've just published the complete choirbook on our Digitised Manuscripts site, and you can read more about it on the BL Medieval blog. Also see our European Studies blog for a fascinating account of the circumstances surrounding the first performance of Offenbach's La Belle Hélène, exactly 150 years ago.

Meanwhile, reports emerged yesterday in the press (including here and here) of the discovery in the British Library of the earliest piece of polyphonic music. Can this strange coded message really rewrite the history of choral music by shifting the earliest known harmony back by more than a century? Let’s take a closer look… 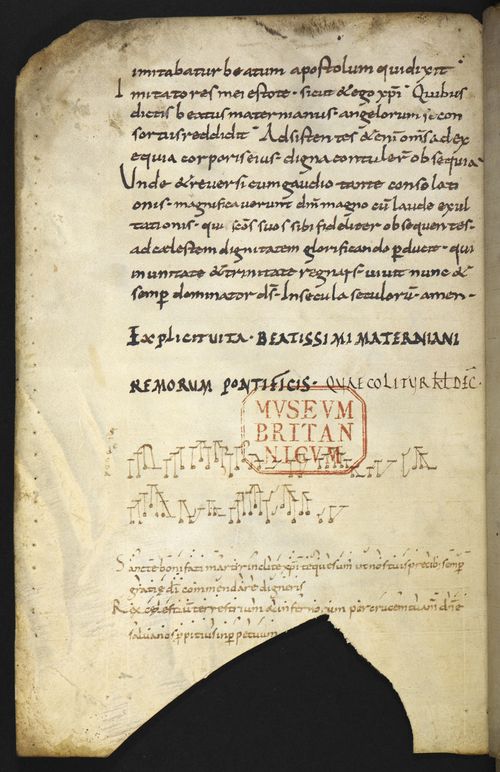 The music consists of a brief inscription written in the blank space at the end of a short manuscript of the life of the fourth-century bishop Maternianus of Riems, written down in the early tenth century. When the manuscript was received as part of the Harley Collection in 1753, nobody paid any attention to these scribblings: the fact that our predecessors chose to deface them with the British Museum stamp is regrettable, but also provides clear evidence that they were not thought to have any significance.

The music was discovered by Giovanni Varelli, a doctoral student at Cambridge, while he was working at the British Library on an internship under the Leonardo da Vinci Programme from the University of Pavia. Giovanni was systematically working along the shelves looking for medieval
musical notations in order to add details to the British Library's Catalogue of Illuminated Manuscripts when he stumbled upon this page completely by chance. At the bottom of the page, on either side of a tear in the parchment which was already present before the text was written, are two short chants notated with neumes characteristic of the early tenth century, in a style known to modern scholars as Palaeofrankish notation.

The first chant is an antiphon in honour of St Boniface, an English missionary who established Christianity in many parts of Germany. The second, 'Rex caelestium terrestrium', is a more generic plea for salvation. This in itself was an exciting discovery, as the number of surviving manuscripts of this very early notation is very limited.

More interesting, though, are the strange patterns of vertical lines with dashes on their tops and circles on their bottoms:

Closer inspection reveals that these symbols represent two separate voice parts - the upper part (shown with horizontal dashes) is the melody of the first chant notated at the bottom of the page, and the lower part (shown with circles) is a separate melody to be sung in harmony with the chant melody - a practice known as organum. The pitches are shown in much the same way as modern notation, by their height on a stave: the only difference is that the stave-lines have been ruled in the parchment with a dry point, so are virtually invisible. The letters on the left show the height at which each note is written, from a up to g, and the vertical lines link the two notes to be sung together. When both voices sing the same note, the two lines converge. The curved sign, on the third note from the right in the excerpt above, shows a liquescent syllable in the text, signifying that the letters m and n should be hummed with the mouth closed: these signs are also found in conjunction with the letters r, t and -gn-, showing some sort of semi-vocalised performance. So in fact this newly invented notation of the tenth century conveys some details which are more subtle and sophisticated than can be shown in the standard modern staff notation of more than a millennium later. Giovanni Varelli has succeeded in transcribing this piece into modern notation: 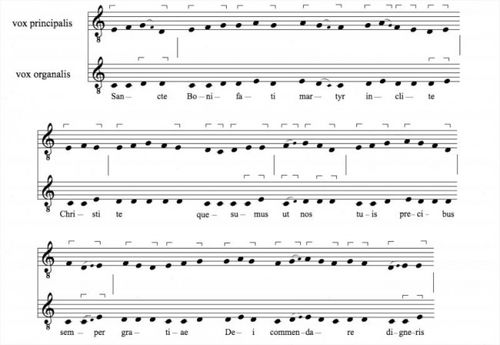 Everything suggests that these unusual signs were written at the same time as the chant along the bottom of the page, in the early decades of the tenth century. In fact, as Giovanni has shown in a more detailed article about this discovery, this invented system of notation is very similar to a scheme found in a contemporaneous music theory treatise, in a manuscript at the Bibliothèque nationale de France, MS lat. 7202 (images available on the Gallica website). Other comparable schemes for showing two- and three-part polyphony are found in other music theory manuscripts of the tenth century, and even the ninth. What makes this discovery in the British Library manuscript so exciting is that it does not form part of a theoretical treatise: it is direct evidence of an actual tradition of performance, rather than being presented as a theoretical possibility. And in that respect, it stands a century earlier than the manuscript formerly considered to represent the beginnings of polyphonic music outside theoretical writings, the Winchester Troper.

So, within this very particular frame of reference, this is the very first music manuscript in the history of harmony in the Western tradition, and draws our knowledge of the practice of this tradition back from around 1000 to around 900.