Consulting the BL's printed catalogue of music can hold certain advantages over the online catalogue, not least in making it possible to browse the holdings for a particular composer on the page. In this unusual instance, a second copy of Hans Gerle's 'Tablatur auff die Laudten' (K.1.b.12), printed in Nuremberg in 1533, was listed only in the printed catalogue until recently, but is a fascinating source in its own right. Unravelling the complexities of this source goes hand-in-hand with cataloguing it fully, and also allows musicologists to study its contents to shed light on the relationship between sacred tunes and secular performances in Reformation-era Germany. 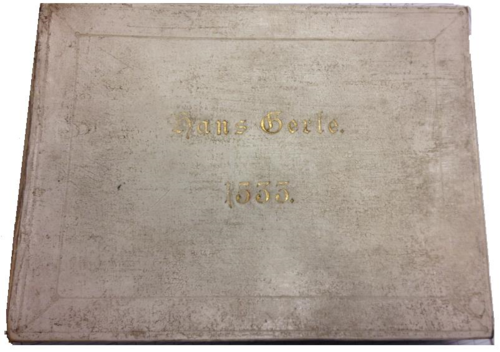 In 1953, notation expert Willi Apel noted uncompromisingly that 'the transcription of pieces written in the German lute tablature is, of course, very fatiguing and slow work.' Nowadays, the process of transcription whilst surrounded by a wealth of cheat sheets is surely less daunting than the prospect of actually learning to sight-read the music on the lute. The sixteenth-century amateur would have bought a copy of Gerle's book and found a well-intended diagram at the beginning of the book, designating a specific symbol to each fret on each string (see below). Unfortunately, this diagram is spectacularly unhelpful. Not only are the letters, numbers and other symbols lined up along the strings far too small to be legible, but the diagram is also upside-down and back-to-front: in order to read the text along the strings and for the diagram of the lute to match up with a real lute in one's hands, the book must be the other way up. The constant flicking of pages and turning of the book must have been annoying for any amateur lutenist ÔÇô perhaps Gerle was keen to encourage people to buy his 1532 treatise on lute-playing too!

Transcription does present some challenges. Unlike other forms of lute tablature, in which consecutive letters correspond to pitches a semitone apart, the German system moves the letters across the neck (going up a string each time) rather than along a string. The result of this is that letters in alphabetical order may represent tones that are as far apart as a major third, a perfect fourth, or a compound augmented fourth. The alphabet is repeated once all letters have been exhausted (omitting 'j', but including two additional symbols, 'et' and 'con'), at which point it starts again with a line over each letter ('─ü') or a double letter ('aa'). These symbols correspond to pitches that are a perfect fourth above the solo letter ('a'). The repetition of the alphabet gives great potential for printer errors, but these can normally be spotted without too much trouble. A further complication is added by the notation style of the Grossbrummer, or lowest string. Each individual German composer used his own method of notating these pitches: Gerle favoured numbers with lines above them.

One of the trickier aspects of the notation stems from the fact that the symbols for each pitch in any given chord are listed vertically from highest pitch to lowest pitch. This in itself makes sense; what complicates it is that as the notation moves from one chord to another adjacent pitches do not stay in line with each other. This reflects the fact that, unlike in the lute tablature of other European countries at the time, the German system does not depict the strings themselves. A straightforward example is shown below (NB ÔÇô the stems and tails signify four minims): 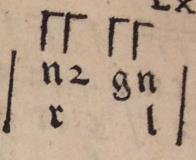 If the two pitches in line with 'n' ('2' and 'g') were written in the same voice part, the following rather unsatisfactory transcription would be obtained, resulting in a tritone between the lower notes, a second between the held A dotted semibreve and the G on the third minim beat, and a poor melodic line in the upper voice:

When the notes are rearranged, however, a much more musical result can be found:

This also allows long melodic lines to penetrate the texture more easily, which is very important since Gerle did not write his own music. Instead, the pieces are arrangements of motets, psalm tunes and other popular songs by other composers, and through a careful transcription which is flexible enough to experiment with the placing of pitches within each musical line, it is possible to recognise these lines in the same way that they must have been familiar to sixteenth-century lutenists playing Gerle's arrangements. 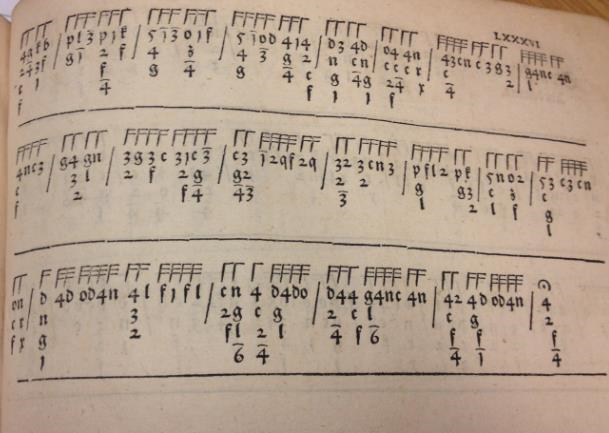 The main benefit of tackling Gerle's source comes from the process of transcription itself: only through transcribing an original source and playing the music back can a non-lutenist really appreciate the tropes and idioms inherent in Gerle's writing, which reflect both contemporary lute technique and popular musical preferences more generally. Since this piece (O mater Maria Christi) was a popular motet, it also demonstrates the overlap between sacred and secular styles in Reformation-era Germany.

Elizabeth Bennett, doctoral student in music at Royal Holloway, University of London, and the British Library.

Posted by Rupert Ridgewell at 4:00 PM