27 short films on music from Qatar, Oman and Kuwait, made by Rolf Killius (the BL's Gulf History Curator for Oral and Musical Cultures) are now available online.

In 2013 and 2014 I had the chance to do fieldwork on traditional music in Oman, Qatar and Kuwait for the British Library Qatar Foundation Partnership Programme. The main aim of this fieldwork was to complement the British Library's historical commercial music collections from the Gulf region (mainly on shellac discs) with new audio and video recordings of traditional music.

I have selected and edited 27 short films from these fieldwork journeys for the Qatar Digital Library Portal, where one can also find contextual pieces outlining the fieldwork and introducing the regions and musical genres. Linked to the portal are YouTube and SoundCloud channels with hundreds of audio and video titles with detailed captions. Additional material can also be found on the British Library Sounds website where one can listen to Middle Eastern music on shellac discs. 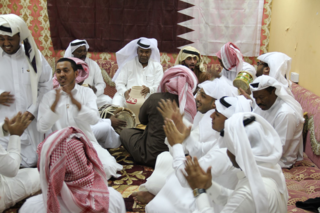 The intention to do fieldwork in one of the richest countries in the world seemed at first to be a challenge. Walking along the Cornice, the waterfront in Qatar’s capital, Doha - with more than its share of skyscrapers and blinking lights, the promenade walkways alongside a superhighway and the wooden boats ready to service tourists and affluent Qataris - gives the impression of a rapidly modernising country which has left much of the Bedouins’ and seafarers’ roots behind. Despite all this we discovered that just a little scratch in the right place can uncover the traditional musical cultures of the desert and the sea again. If one has access to the very intimate family, tribal or informal Qatari Arab gatherings it is surprising how much of the traditional music culture is still alive.

Or, watch the al-ardha performance during the tribal gathering of the al-Atteeyah community during the annual Qatar National Day. Here the ruler of Qatar, Sheikh Tamim bin Hamad bin Khalifa al-Thani, graced the audience and players: 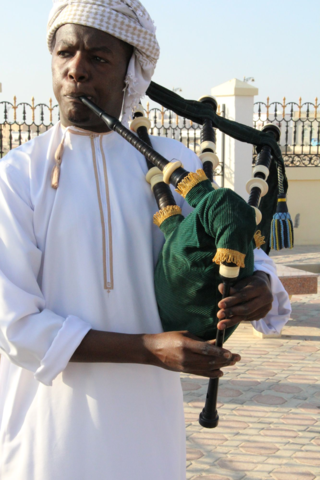 In the Sultanate of Oman traditional music, poetry and dance are still part and parcel of both everyday life and national/patriotic celebrations, and are practised by experts and laypersons alike. An example of how well Omani people respect music was my late-night arrival at the airport in Muscat: all bags were scanned and the customs official asked me to unpack all my equipment. Finally he pointed at the microphones and barked: “What is this for?” I hesitated at first and then answered that they were “microphones to record Omani music”. A big smile settled on his face and he wished me a good time in Oman. Welcome to the country of music and frankincense!

The musical culture reflects the population’s multi-ethnic origin and has created a unique variety of numerous musical and dance genres. Though they all have been flavoured by the grand cultures of India, East Africa and Persia, the Omani people have developed their own variety of specific Gulf styles. Along with Hijaz (Red Sea coast in Saudi Arabia) and Yemen, Oman has the most ancient and diverse culture on the Arabian Peninsula.

For instance, try Galfat Shobani, the sea music from Oman, completely different from sea music in Qatar and Kuwait and – surprisingly – with a Scottish bagpipe as the solo instrument.

Or, watch the Al-Maidan dance and music from a large wedding in Sur. This dance is considered the most complicated and sophisticated dance form and is strongly influenced by African culture. 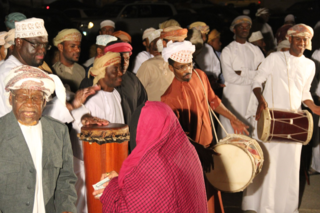 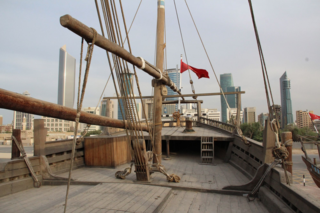 Although Kuwait City (where the research was conducted) at first seemed to me a bit dull, once personally introduced, the numerous places where traditional music is still practised revealed a rich heritage of a living Gulf music culture. Indeed Kuwait is musically quite a revelation. Traditional music is performed, at least in private gatherings, on a weekly basis.

Kuwait was and (to a certain degree) still is the centre of traditional music in the Gulf. Together with Bahrain the country shares the honour of being the birthplace of such once popular music genres as sowt (early urban genre of the Gulf). Bahri (sea music), in particular, has been at the heart of Kuwait’s music scene. Numerous old audiovisual documents show evidence of the country’s ‘roaring 1960s’, where male and female musicians performed widely and were recorded by record labels and television companies. Kuwait has maintained a thriving traditional music culture to the present day, which is practised nearly exclusively in private homes and semi-private diwaniyas or traditional meeting places for men, mostly related to music.

For instance, try this sowt performance from a diwaniya in Kuwait City:

Or, try Leywa (or liwah), the ritual music of African origin practised in the whole Gulf region. The instrument players are at the centre of the performance while the surnai (oboe) player leads the dancers and singers who move anti-clockwise around the instrumentalists.