Thea Musgrave - a new performance and a PhD opportunity

A few years ago the British Library acquired the archive of Thea Musgrave. We are now collaborating with the University of Glasgow to offer a PhD studentship on "The music of Thea Musgrave: an analysis based on the archival sources". Now in her 80s, Thea Musgrave remains very active as a composer, and her latest work Voices of our Ancestors will be premiered on Thursday 9 July at the City of London Festival by the Choir of Selwyn College Cambridge. The studentship will be offered under the AHRC Collaborative Doctoral Partnership scheme in conjunction with the British Library, London. This exciting opportunity will require the researcher to divide his or her time between the University of Glasgow and the British Library. The student will be expected to assist with the cataloguing and interpretation of the archive, and will be invited to participate in other aspects of the British Library’s activities. A supervisory team from both institutions will oversee this work and full research training (including archival research skills) will be offered. The team will include Dr Martin Parker Dixon (Music) and Dr Simon Murray (Theatre Studies) from Glasgow University, and Richard Chesser, Head of Music at the British Library.

The studentship is funded for three years to commence in October 2015 and covers tuition fees at the Home/EU rate, due to funding. Home students and EU students who have lived in the UK for 3 years prior to the award will also receive a maintenance bursary (stipend) of £14,057 (2015/16 RCUK rate). In addition, the student is eligible to receive up to £1,000 a year from the British Library to support travel directly related to the doctoral research, and will be given use of a desk and computer in the Music department of the Library and access to staff catering facilities. All AHRC Collaborative PhD students automatically become part of the UK-wide Collaborative Doctoral Partnership development scheme which will provide training in a range of skills needed for research within museums, archives, galleries and heritage organisations. 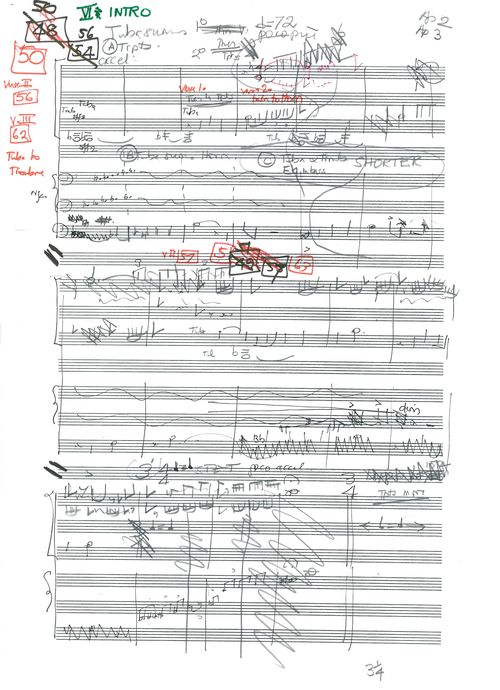 A page of sketches for Thea Musgrave's new work, Voices of our Ancestors

We see four interconnected questions as providing the stimulus for developing and integrating original research into Musgrave’s oeuvre:

In all of these areas of enquiry we anticipate that close study of the manuscript materials will underpin the research findings. It may then be appropriate for a catalogue description of the archive, taking account of the compositional processes as revealed in the source materials, to form an appendix to the thesis. By this means the student’s contribution to the Library’s catalogue can form part of the overall evaluation of the PhD.

For further details of how to apply for the studentship, please see http://www.gla.ac.uk/media/media_408759_en.pdf

Applications should be submitted by Friday 17th July 2015, and interviews will take place in early August.