In preparation for the study day on â€˜Musicians, publishers and pirates of the mid-Baroqueâ€™, held at the British Library on 29 June 2016, I had the good fortune of looking at some fascinating early printed volumes of music from across Europe. A good number of these were on display at the study day exhibition which I curated. I decided to discuss briefly the preface to one of the printed editions, which reveals fascinating insights into some of the concerns of musicians in seventeenth-century Germany. 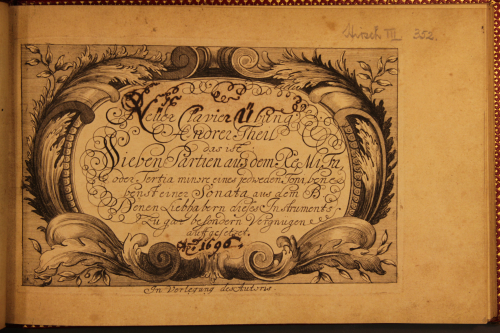 Johann Kuhnau (1660â€“1722) was the immediate predecessor of Bach as Thomaskantor in Leipzig, a post he held from 1701 until his death. Having studied law at the university there, Kuhnau spoke several languages and must have been extremely well-read. In his publication Der General-Bass in der Composition (Dresden, 1728), Kuhnauâ€™s pupil Johann David Heinichen mentions two manuscript treatises on music theory by his former teacher, both of which are now lost. As a musician, Kuhnau composed primarily for the church, providing music for services and major funerals at the two main churches in Leipzig, though much of his output is also lost (see Johann Kuhnau, The Collected Works for Keyboard, ed. C. David Harris (New York: Broude Trust, 2003), xviii-xx).

Kuhnau was also famed as an organist and published four volumes of keyboard music, three of which were self-published (and probably self-financed) by the composer. The first of these, Neuer Clavier Ãœbung Erster Theil (Leipzig, 1689), consists of seven suites or â€˜Partienâ€™ in all of the commonly used major keys (â€˜Tertia majore eines jedweden Toniâ€™), namely C, D, E, F, G, A and B flat. The preface to the reader (â€˜Hochgeneigter Leserâ€™) includes an explanation of the ornament signs used by Kuhnau (â€˜Accentusâ€™, â€˜Mordantâ€™ and SchleÃ¼fferâ€™).

The second publication, Neuer Clavier Ãœbung Andrer Theil (Leipzig, 1696, first published 1692) was intended as a follow-up volume to the first. In the preface to this second part, Kuhnau explains that his first publication had met with some success, which is why he decided to publish a second volume. This consists of a further seven â€˜Partienâ€™ in all of the commonly used minor keys (â€˜Tertia minoreâ€™): C, D, E, F, G, A and B. To this is added a â€˜Sonataâ€™ in B flat major. 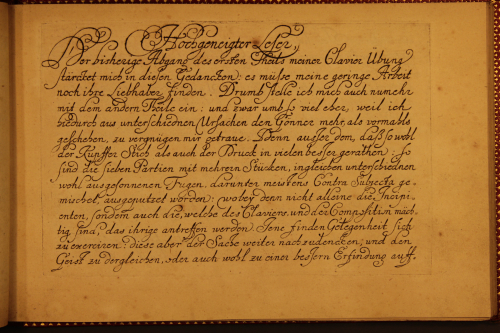 The preface to this second part includes a remarkable defence against possible criticism. First, Kuhnau felt the need to justify including a sonata for the keyboard, as this was the first work of its kind published in Germany. (This is also discussed in Johann Kuhnau, SÃ¤mtliche Werke fÃ¼r Tasteninstrument, ed. Norbert MÃ¼llemann (Munich: Henle, 2014), x-xi. A transcription of the complete preface (in German) is available as free download from Henle.) Kuhnau asks: â€˜For why should one not play such pieces [sonatas] on the keyboard, as on other instruments? since no other instrument has ever disputed the precedence of the keyboard in terms of perfectionâ€™ (my translation; original German: â€˜Denn warumb sollte man auff dem Claviere nicht eben, wie auff andern Instrumenten, dergleichen Sachen tractiren kÃ¶nnen? da doch kein einziges Instrument dem Claviere die PrÃ¦cendenz an Vollkommenheit jemahls disputirlich gemachet hatâ€™).

Second, he defends his occasional contravention of strict voice-leading rules, for example by having voices drop out or being added to the texture, though he notes that his fugues are â€˜strictly executedâ€™: â€˜If one would proceed strictly with the continuation of voices, much constraint would result, and the pleasantness would lose itself in some pieces. Consequently, and after taking my guidance from famous masters, I have in the allemandes, courantes and sarabandes occasionally been negligent in rigour, by dropping one voice and taking up another one elsewhere. The fugues, however, are strictly executed in four voicesâ€™ (my translation; original German: â€˜so man ja mit der Continuation der Stimmen stricte verfahren wolte, so wÃ¼rde viel gezwungenes mit unterlauffen, und die Annehmligkeit in ma[n]chem StÃ¼cke sich verlieren. Gestalt ich gleichfalls, nach Anleitung berÃ¼hmter Meister, in den Allemanden, Courranten und Sarabanden bisweilen mit Fleiss mich etwas negligent erwiesen, eine Stimme verlaÃŸen, und hingegen anderswo eine neÃ¼e mit ergriffen. Doch sind die Fugen mit 4en genau ausgefÃ¼hret wordenâ€™).

Lastly, Kuhnau also notes that â€˜half-knowledgeablesâ€™ might judge him unreasonably for writing what may seem to be consecutive octaves (resulting from doublings in chords of six or more voices), and takes care to explain that these arise through a crossing of parts: â€˜Rather seldom, in some preludes it also seems as though octaves go jointly, but the excuse for this lies in the changing of parts: which is mentioned here so that the half-knowledgeables do not pontificate with an untimely judgementâ€™ (my translation; original German: â€˜Es scheinen auch, wiewohl gar selten, in manche[m] PrÃ¦ludio Octaven miteinander fortzugehen, deren Entschuldigung aber in der Verwechselung der Stimmen bestehet: welches zu dem Ende errinnert wird, damit die HalbverstÃ¤ndigen sich nicht etwa mit einem unzeitigen Urtheile herauslassen mÃ¶chtenâ€™). 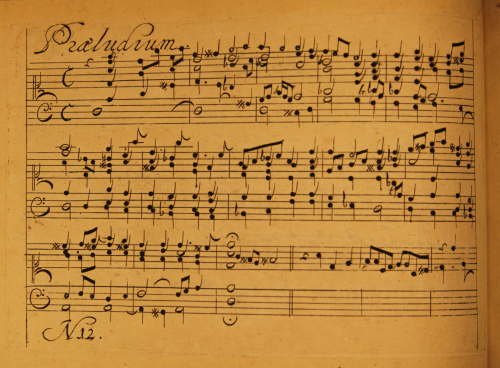 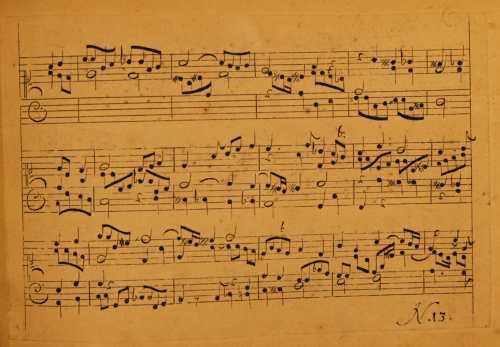 Illustration 3: Pages 12 and 13 of Kuhnau, Neuer Clavier Ãœbung Andrer Theil, demonstrating the use of full chords leading to consecutive octaves in the â€˜freeâ€™ section of the prelude, followed by the â€˜strictâ€™ four-part fugue.

Kuhnauâ€™s remarkable preface demonstrates the concern the composer must have had about contravening a perceived norm or tradition of â€˜strict compositionâ€™. Musicians in seventeenth-century Germany, not least one of the intellectual standing of Kuhnau, seem to have thought of relatively â€˜freeâ€™ compositions, such as suite movements for keyboard, as being grounded in the much stricter approaches of sacred vocal music as exemplified by the music of Palestrina. Kuhnau seems to have expected any deviation from this strict approach to run the risk of meeting with criticism, so he must have felt it necessary to pre-empt any â€˜untimely judgementâ€™ by testifying in his own defence.

Posted by Rupert Ridgewell at 5:37 PM

Can you handle our Handel?

Well, yes you can - and now from the comfort of your own home or office!

An eye-watering 16,500 images later, digitisation of our world-famous collection of Handel autograph manuscripts is complete. From Acis and Galatea to Zadok the priest (and everything in-between), all of your Handel favourites are now at your fingertips.

Muse over Messiah, revel in an organ concerto or simply browse the collection and discover something new. To find out more, search for "handel" at  www.bl.uk/manuscripts. 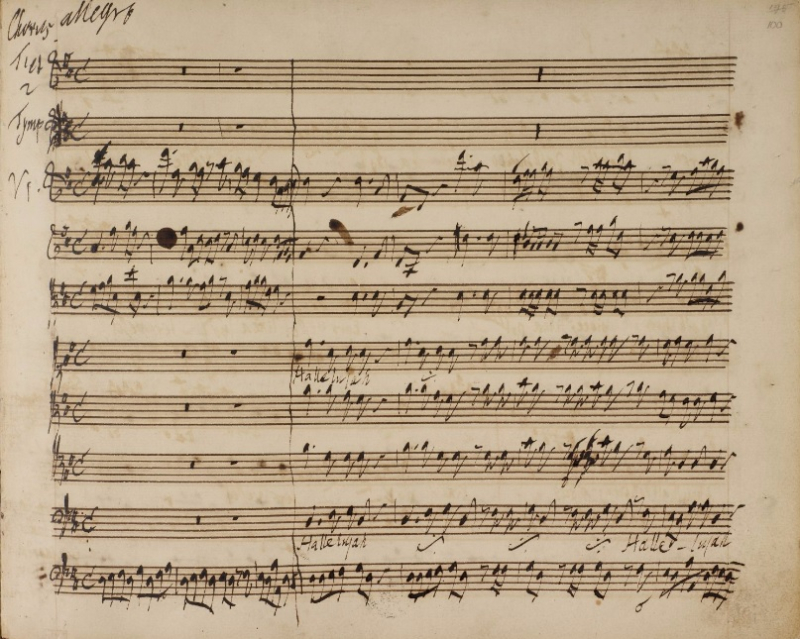 The music of Frederick Delius (1862-1935) presents fascinating challenges of interpretation, documentation, performance, and analysis. In conjunction with their current AHRC award, â€˜Delius, Modernism and the Sound of Placeâ€™, Professor Daniel Grimley and Dr Joanna Bullivant will lead a symposium on Deliusâ€™s music, focusing on new developments in Delius scholarship and future directions in research.

The event is free of charge and will take place on Friday 15 July 2016 in the Foyle Visitor and Learning Centre at the British Library. Directions to the venue, which is located within the British Library Centre for Conservation, are available here.

The symposium will also celebrate the launch of the online Delius Catalogue of Works, an interactive resource created in the course of the project. The catalogue draws heavily on the substantial collection of Delius' works held at the British Library.

To view the full programme for the symposium, click here. To book a place, please email Joanna Bullivant (joanna.bullivant@music.ox.ac.uk), by Monday 11 July 2016 at 5 pm. 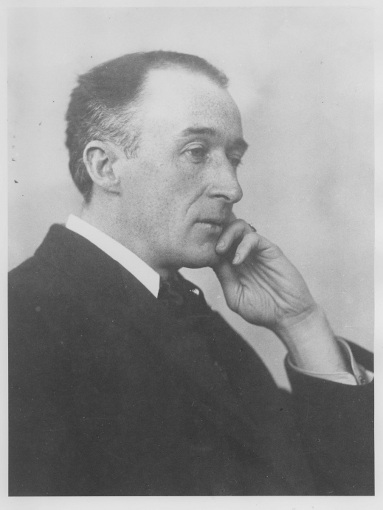