This year's BBC Proms series is now well underway. To get you in the mood, we thought we'd showcase two batons from our collections. Both formerly belonged to Sir Henry Wood, who conducted the Proms for nearly half a century. His orchestral players affectionately nicknamed him "Timber". Apparently, this was more than a play on his name, since it seemed to represent his reliability, too.

The first baton (Additional MS 56443 B) was presented to Sir Henry by Queen Victoria at Windsor Castle, after a concert of selections from Wagner's Parsifal in 1898. It is housed in its original presentation case made by Collingwood & Co., jewellers to the Royal Family.

Made of beech and 575 mm long, it is decorated with a copper-gilt band bearing the initials 'V R I' in blue enamel, and a gilt coronet ornamented with coloured glass. 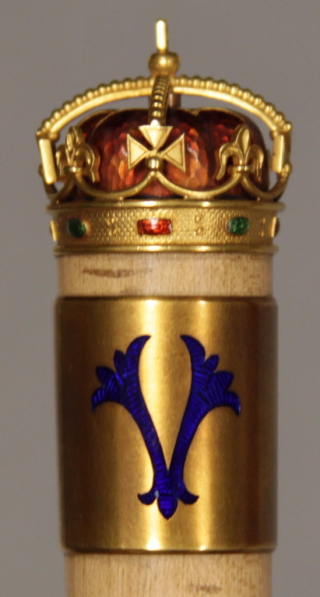 It seems highly unlikely that Sir Henry used this baton on a daily basis as it was clearly intended for presentation rather than practical purposes. By contrast, our second example (Additional MS 56443 C), was used by the conductor. 610 mm in length, the wood of the stick is painted white. 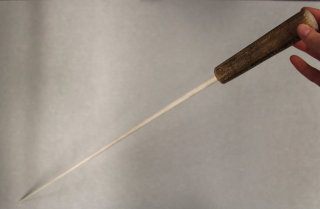 The cork handle reveals the baton's history. It was used by Sir Henry at his last concert, which took place in Bedford on 26 July 1944.

If you're lucky enough to attend one of this year's Proms concerts in person, or to catch one on television or radio, take a moment to remember Sir Henry, whose bust is displayed so prominently in the Royal Albert Hall auditorium, and whose batons are here at the British Library. His artistic energy and enthusiasm for new music endowed the Proms with their continuing creative and educational force.