Nicola Matteis and his Ayrs for the Violin

Researching for my recent blog post (http://blogs.bl.uk/music/2016/08/music-printing-in-england-1650-1700-and-the-british-library.html), I came across a number of volumes that initially caused me great confusion: there were a total of twelve shelf marks at the British Library associated with a smaller number of different titles, all of which seemed to be of Ayrs or Ayres for the violin by Nicola Matteis. Some of the shelf marks carried the same title and the same date, but there seemed to be five different dates: 1676, 1685, 1687, 1688 and 1703. What was less clear to me was whether these five dates represented different editions of the same pieces, or of entirely different music. It turned out there were actually four different books of Ayres, some of which were published at the same time, while some copies of the same book were printed at different times. To explain this, we need to delve into some of the context surrounding music printing in the late seventeenth century, specifically that using engraved plates. 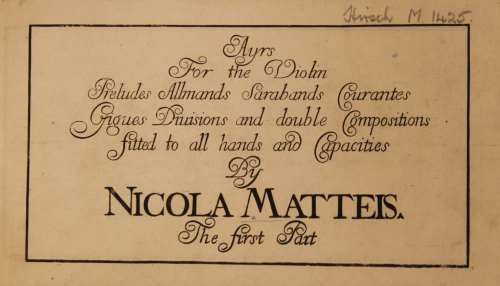 Movable type had to be disassembled after a print-run of one gathering, in order to be re-used for other music or text, so reprinting the same page later was an expensive choice. As a result, print-runs were often relatively large, and a book that had sold out would often appear in another edition rather than another issue of the same edition. By contrast, engraved plates were usually kept and re-used whenever necessary, so it was financially viable to have a relatively small initial print-run if there were any doubts that the book would sell. As a result, copies produced in a second print-run may look almost exactly the same as those produced earlier. Furthermore, there may be later additions of pages to printed music, or small differences between seemingly identical copies that came about by correcting previous errors on the same plate, or, more rarely, re-engraving an entire plate (Jones, ‘The “Stupendious” Nicola Matteis’, 51-2; also Krummel, Guide, 9-11; for a description of the process of correcting errors, see Poole, ‘Music Printing’, 46-7). Lastly, excess printed leaves from a previous print-run might be given a new title page and interspersed with new pages, so that the production date of a particular copy may actually stretch several years. This means that, unlike in type-set books and music, it is often more difficult to decide whether two engraved volumes of the same music constitute a different ‘edition’, ‘issue’ and ‘impression’. Dates given on title pages sometimes cannot be trusted, as the actual print run may have been much later than the date suggested (Kummel, English Music Printing, 145); often, as a consequence, no date is given at all.

All of these factors are relevant when considering the self-published output of Nicola Matteis, an Italian-born virtuoso violinist who settled in London by 1674. Matteis may initially have printed some of his violin music for his pupils before choosing to publish his first two books of Ayres for violin and bass in 1676 (Carter, ‘Music Publishing’, 84-5). This publication may in turn have been intended to attract more pupils (Ibid., 128-9). Simon Jones even argues that the technical difficulties of many of the pieces in Matteis’s rather successful Books 1 and 2 could have encouraged people to enrol for the composer’s violin lessons in order to learn to play them (Jones, ‘The “Stupendious” Nicola Matteis’, 58). According to Jones, the earliest British Library copy of this (shelf mark Hirsch M.1425, Illustration 1) dates from between 1676 and 1679, so the date given in the online catalogue (1676) is potentially correct. The date ‘1679’ occurs in a handwritten inscription on a front flyleaf, which may indicate the date it was presented as a gift rather than the date it was printed (Ibid., 117). 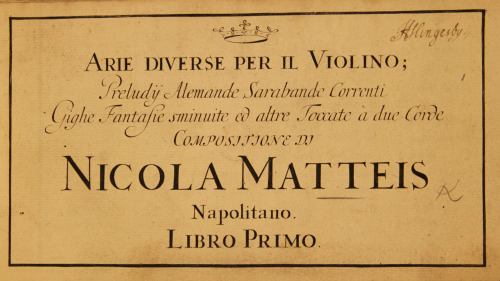 The first two books were probably reprinted several times: the first volume of British Library K.1.f.10 represents a different impression of the same issue as Hirsch M.1425. At some point after 1676, Matteis also published them with Italian title pages (British Library K.1.f.12.; see Illustration 2) and with a preface to the reader. The two instances of the number ‘8’ in the coronet on the Italian title pages (see the close-up in Illustration 3) has led cataloguers to assume that the publication is dated 1688 (this is also the date given in the British Library’s online catalogue), but, as Jones points out, these figures may be purely ornamental and ‘[e]verything else about the issue supports the conclusion that it dates from a much earlier period’ (Ibid., 57).

Illustration 3: Close-up of coronet on first title page of K.1.f.12.

Jones’s main argument is that the wording of the preface (Illustration 4) suggests a date of publication some years after Matteis’s arrival in London, but not at least fourteen years as suggested by the date ‘1688’: ‘It is an honourable and proper thing to conform to the customs of those persons with whom one lives. Seeing that for some years I have lived under the northern skies I have sought to adopt the musical tastes of the inhabitants of this country without distancing myself too far from the Italian style’ (‘È Cosa honorevole, e giusta d'uniformarsi a l'Umore di quelle Persone con I chi si vive, essendo io vissuto alcuni anni sotto il Cielo Settentrionale, ho cercata incontrare il genio de gl’abbitatori di quello, nel stile musicale, benche non tutto affatto, per I non distaccarmi di molto dalla Scuola Italiana’, translation in Jones, ‘The “Stupendious” Nicola Matteis’, 57). Interestingly, Matteis also displays confidence in his own music by challenging readers who are not satisfied to ‘have the goodness to write something better’ (‘haverai la bonta di comporne delle megliori’). 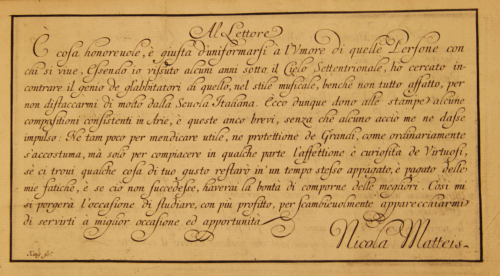 Books 3 and 4 were published from 1685 onwards; the coronet on the title page of Book 3 here clearly includes the date ‘1685’ (Illustrations 5 and 6). The British Library copies are Hirsch III.379. / Hirsch III.379.a. (bound together) and the second volume of K.1.f.10., a presentation volume which has a beautiful – possibly contemporary – binding bearing an inscription to Pietro Capponi, the representative of the Grand Duke of Tuscany (Jones, ‘The “Stupendious” Nicola Matteis’, 40, see Illustration 7). 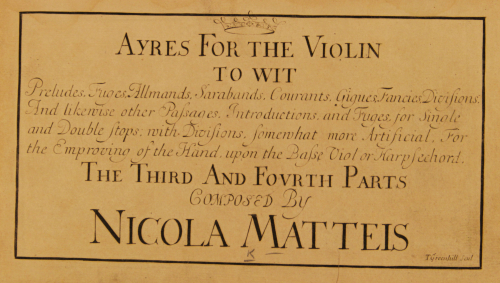 Illustration 6: Close-up of coronet on first title page in second volume of K.1.f.10. 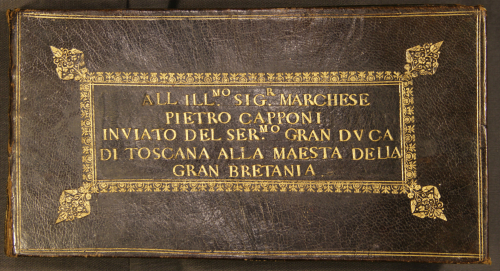 Illustration 7: Binding (with inscription) of second volume of K.1.f.10.

Despite the Ayres being solo violin pieces with bass, Matteis issued a second violin part to the existing violin-and-bass publications from about 1687 (British Library K.1.f.11. and Hirsch IV.1632.a.), most likely to take advantage of the increasing interest in sonate a tre sparked by the circulation of Corelli’s opp. 1-3 in England (Jones, ‘The “Stupendious” Nicola Matteis’, 50). The first violin (and bass) part book of Books 3 and 4 was also reissued, probably to be sold with the newly published second violin part. In the British Library copy (Hirsch IV.1632.), both Books 3 and 4 now carry different title pages. Book 3 still carries the date ‘1685’ in the coronet (Illustrations 8 and 9), but cannot have been printed before 1687, as it (and that of Book 4) point out that a ‘Second Treble’ was now available (Ibid., 69). Furthermore, the title page of Book 3 mentions that new pieces had been added to Book 4 (the last three pages were substituted by seventeen pages of new music). 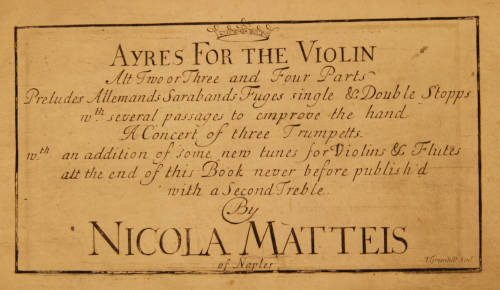 Much later (in 1703), John Walsh issued Books 1 and 2 in three part books (violin 1, 2 and bass) in a new engraved edition – the first time the second violin part of Books 1 and 2 was published. The British Library has two copies of these: shelf marks c.66 and d.20.(3.), the latter of which is lacking the bass part book. The overview given in Illustration 7 summarises Jones’s findings in respect of all British Library copies of Matteis’s Ayres. While this may seem confusing at first, it serves to demonstrate some of the complexities researchers and catalogues may be faced with when working on seventeenth-century (and later) engraved music. 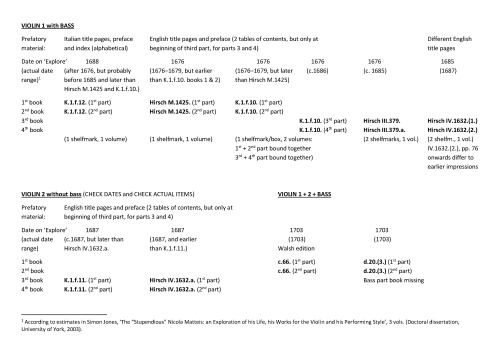 Moreover, a clear chronology of the various issues of a publication such as Matteis’s Ayrs may help to understand changes to the musical text or to other aspects of the publication. Some of these modifications may be relatively simple corrections of engraving errors, but other, more creative amendments such as the addition of a ‘Concert of three Trumpetts’ to Book 4 in about 1687 may reflect stylistic changes and fashions of a certain time, such as the popularity of music for trumpets in the late seventeenth century (Jones, ‘The “Stupendious” Nicola Matteis’, 150-2).

Jones, Simon, ‘The “Stupendious” Nicola Matteis: an Exploration of his Life, his Works for the Violin and his Performing Style’, 3 vols. (Doctoral dissertation, University of York, 2003).

Posted by Rupert Ridgewell at 11:10 AM