Whether or not you consider yourself knowledgeable in seventeenth-century Germanic languages and dialects, you might want to try identifying the meaning and contexts of the two songs discussed in this post. These were published in New Ayres and Dialogues Composed for Voices and Viols (London, 1678), printed by one ‘M.C’ for Henry Brome. The title page is shown in Illustration 1. Note that the two composers named on the title page, Banister and Low, may have been responsible only for the second part of the publication (Lessons for Viols or Violins), which does not concern us here. 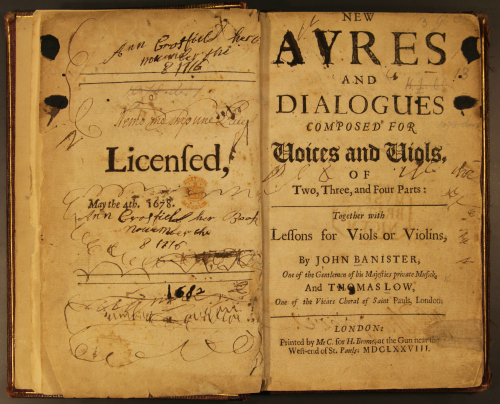 The volume contains 67 English songs, dialogues, ‘trialogues’ and catches, including ‘A Song after the Italian Mode’ (‘See how Thames Silver Streams are now detain’d for you’) by a ‘Seignior William in Northampton-Shire’. With its excessively long melismas, one of which spans eight bars of four crotchet beats and mostly semiquavers, the song seems to be a parody of the virtuosic Italian vocal style. In addition to the 67 English-language pieces, there are two which at first glance appear to be in German (see Illustration 2). The text is written in ‘Gothic’ script (known in German as Fraktur) and the titles appear in the (alphabetical) table of contents amongst the other vocal pieces in the collection. 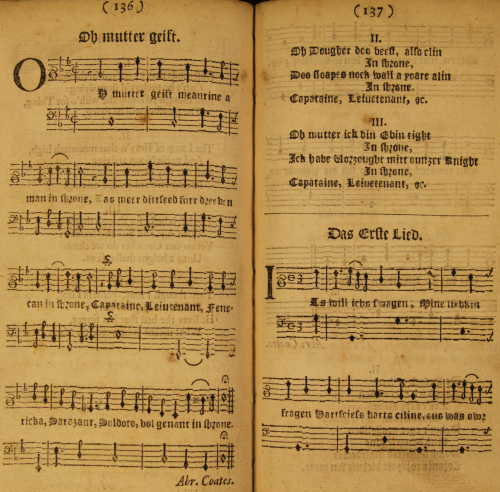 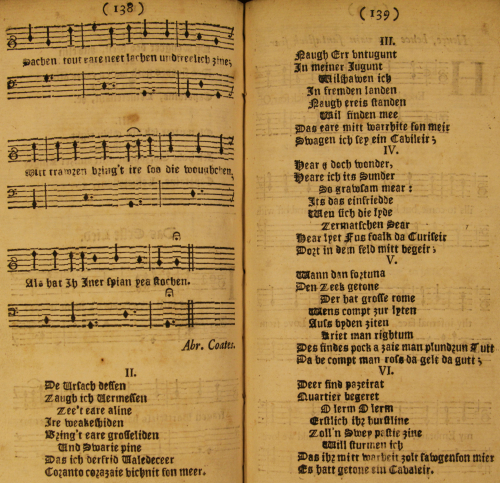 Crucially, however, what would the average buyer of the volume have done with such songs? He or she would hardly have had any knowledge of German, but would probably have been able to read Blackletter (‘Gothic’ script), as this was still used to some extent in English publications (see the title page, where ‘Voices and Viols’ is written in a similar type). They could only have sung the text phonetically, pronouncing the words as if they were (nonsensical) English words.Indeed, some words and phrases appear to be phonetic spellings of German words for an English reader/singer, as in stanza V of the second song: ‘Wann dan fortuna / Den Zeek getone / Der hat grosse rome / Wens compt zur lyten / Aufs byden ziten’, which could be meant to read ‘Wenn [or ‘wem’] dann Fortuna den Sieg getan, der hat große[n] Ruhm; wenns kommt zur Leuten [or ‘Läuten’], auf beiden Seiten’. This in turn would roughly translate as ‘When [or ‘for whom’] Fortune achieves victory, he has great fame; when it comes to people [or ‘ringing’] on both sides’. At least this appears to carry some kind of meaning, even if it remains somewhat mysterious, given that the three lines following this are difficult to decipher in a similar way.

Some of the pronunciation of the German words could have been in a particular (seventeenth-century) dialect, making the phonetic spelling even more difficult to understand with a background in modern German. It could also be that the two songs were intended as parodies of an unidentified German singer that was known in some London circles at the time. After all, the ‘Song after the Italian Mode’ seems to be a parody of Italian singing, although the text is entirely in English and does not shows any signs of Italian pronunciation.

A hypothesis that would draw together several of these ideas is that the text was read or sung by a German singer, perhaps in the form of the present songs, though the attribution to what appears to be an English name, ‘Abr. Coates’, would suggest otherwise. The composer of the present songs could have notated the text phonetically, inevitably mishearing some words and thereby effectively rendering the original text difficult or impossible to reconstruct for us today. These texts could then have been set to music as a kind of parody. The songs are musically extremely simple, suggesting either that they were folksongs that were transcribed, or that Abraham Coates was not a particularly gifted composer, though some of his other songs are slightly more interesting.

A precedent for such ‘aural transmission’ of vocal music is found in Daniel Henstridge’s commonplace book, British Library Add. MS 29397. As Rebecca Herissone has shown, Henstridge preserved a performance of Pietro Reggio’s ‘Arise ye subterranean winds’ as the composer himself may have sung it, with some ‘Italian’ pronunciation such as added vowels at the ends of words (‘more-a’) and a dropped initial ‘h’ in ‘howl’ (Rebecca Herissone, Musical Creativity in Restoration England (Cambridge: University Press, 2013), 377-83).

New Ayres and Dialogues actually contains seven more of Abraham Coates's songs (in English), one of which is certainly a parody (see Illustration 3). Its text uses a number of French phrases and the pronunciation of some English words is supposedly ‘French’: ‘anie odder tinge of noate’ (‘any other thing of note’). Whatever the meaning and contexts surrounding the two ‘German’ songs, it seems like a fascinating puzzle to me, and one that – as far as I know – has yet to be solved. 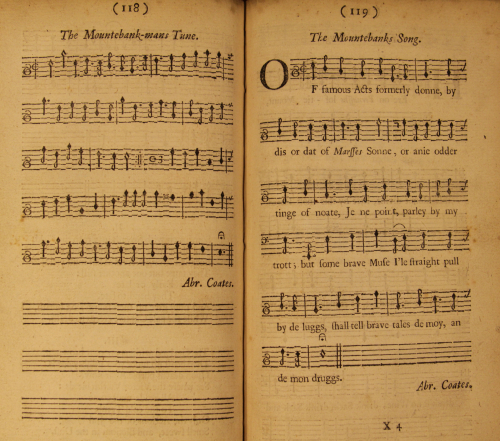 Posted by Rupert Ridgewell at 4:20 PM