Dragons and greyhounds: a day in the life of a digital music curator

In February 2016, I started a new job at the British Library working as Curator, Digital Music. Friends and family often ask me what this involves. The short answer is an awful lot of things, ranging from collecting digital sheet music as part of the non-print legal deposit regulations, to planning new music content for the web pages and writing blog posts to highlight our work and collections.

I recently received a request from the Alamire Foundation in Leuven for copies of a manuscript from our collections for use in their new Integrated Database for Early Music. After dealing with licensing issues and liaising with my colleagues in the Manuscripts department regarding the supply of the images, I actually got a chance to look at the manuscript itself - always a highlight of the job.

The manuscript in question, Royal MS 8 G VII, dates from circa 1513 to 1544 and is a book of 28 motets for four voices. All are apparently anonymous, although later research has since identified works by Jean Mouton and Josquin Desprez, amongst others.

The manuscript was produced in the workshop of Petrus Alamire in the southern Netherlands. Born into the Nuremberg merchant family of Imhof, Petrus settled in the Low Countries in the 1490s and became famous as a music scribe, having made several similar choir books for other European courts.

Browsing through the images, I was struck by the miniature below, which  appears on folio 2 verso. 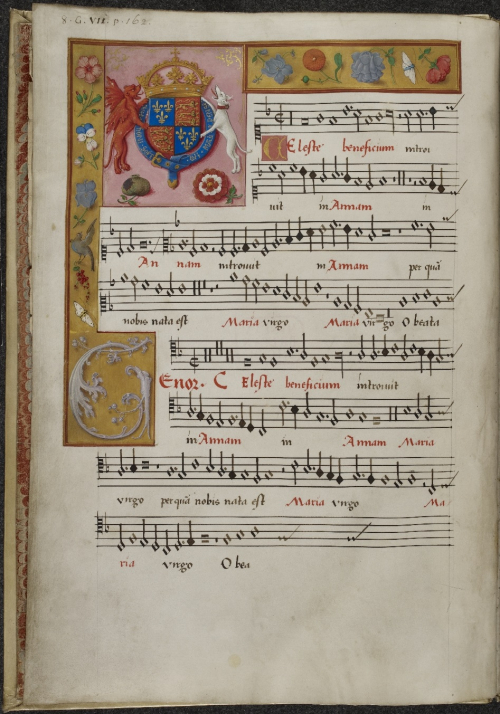 This manuscript was probably produced for Henry VIII and  Catherine of Aragon. In colours and gold, the miniature depicts the royal arms with dragon and greyhound supporters. Also included are the heraldic emblems of the Tudor rose and pomegranate (the latter being Catherine's emblem). The striking borders depicting flowers, insects and birds is in a distinctly Flemish style. Meanwhile, the portcullis badge appears on folio 3. 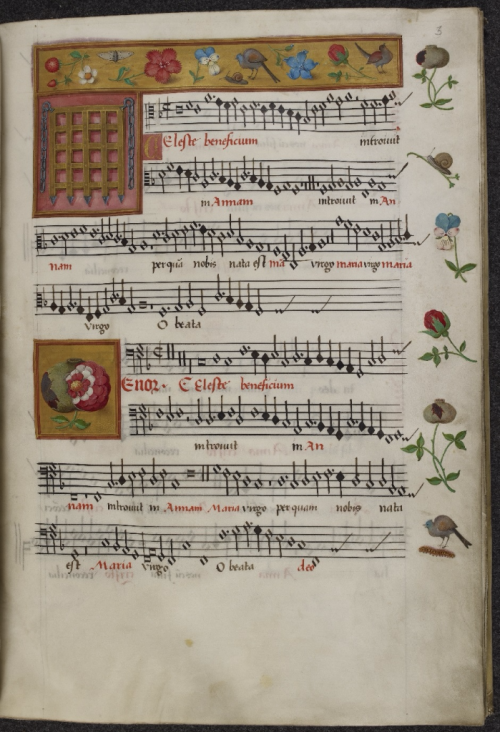 Presented to the British Museum by George II in 1757 as part of the Old Royal Library, this beautiful manuscript can be browsed in full on our Digitised Manuscripts website.