To mark the occasion, we’re showcasing a very unusual item from our extensive music holdings.

Found within a miscellaneous collection of letters, locks of hair, and photographs of notable musicians, is a single leaf, neatly preserved in a polyester sleeve. 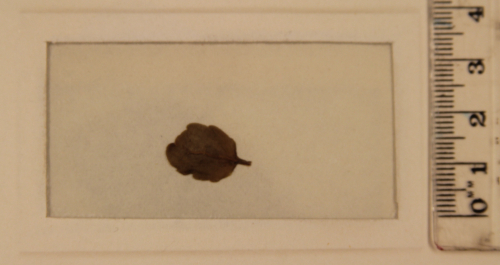 This leaf is the smallest item in our collection of music manuscripts. A note preserved with it suggests it was gathered from Mozart’s grave by one Frederick George Edwards during a trip to Vienna in  April 1890. 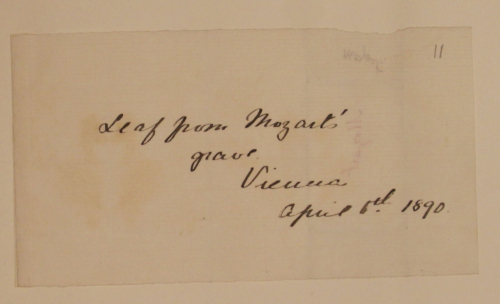 Edwards was organist of the Surrey Chapel, moving to the newly-built Christ Church, Westminster Bridge, in 1876. He transferred to St John’s Wood Presbyterian Church in 1881, where he remained as organist until 1905. He was also a notable music historian. Besides books on hymn tunes and Mendelssohn’s Elijah, he wrote articles on cathedrals and the English Bach revival for the Musical Times, some 21 entries on 19th-century musical figures for the Dictionary of National Biography, and further articles for the second edition of Grove’s Dictionary. The leaf forms part of a 13-volume collection of his papers held at the British Library.

Mozart died just before 1am on 5 December 1791. The cause of his death was registered as ‘hitziges Friesel Fieber’ or severe miliary fever (‘miliary’ referring to a rash resembling millet-seeds). It was later diagnosed as ‘rheumatische Entzündungsfieber’ (rheumatic inflammatory fever).

The common belief that Mozart was buried in a pauper’s grave appears to be without foundation. Instead, in accordance with Viennese custom, he is thought to have been buried in a common grave at the St Marx cemetery outside the city of Vienna two days after his death. The term referred to an individual rather than a mass grave, belonging to a non-aristocratic citizen. The precise location of the grave is unknown.

The funeral arrangements were made by Mozart’s friend and patron Baron Gottfried van Swieten. The tale of stormy and snowy weather conditions also now appears to be false. In fact, the day was thought to have been calm and mild.