We are delighted to announce that a fascinating album has recently been added to the British Library's Music Collections, thanks to the diligent work of the Arts Council's Acceptance in Lieu scheme.

The album was compiled by Vincent Novello (1781-1861), organist and founder of the Novello music publishing house. Comprising 78 leaves, it is bound in leather with a gold-tooled harp crest on the front board and an elegant metal clasp.  It is featured in the Cultural Gift Scheme and Acceptance in lieu annual report 2015/16 (see page 70), and has now been formally added to the British Library's extensive collection of music manuscripts. 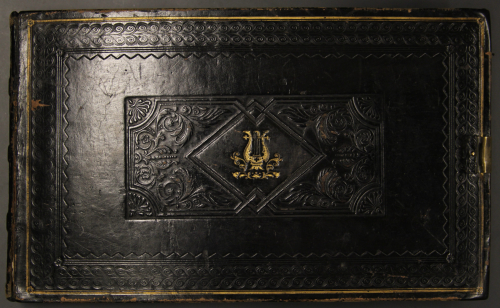 The album contains autograph manuscripts by Liszt (58 bars from his Grand Galop Chromatique), Paganini (6 bars marked presto), Rossini (3 bars), Hummel (10 bars) and Mendelssohn (34 bars for an organ piece), Donizetti, as well as fragments by Beethoven, Mozart and Haydn. It also contains autographs of other performers, actors and artists, as well as literary figures such as Charles Dickens. 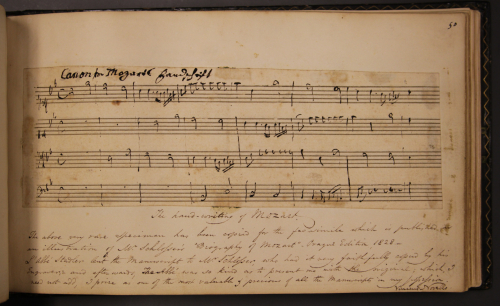 Leaf containing  a fragment of music in Mozart's own hand, together with a description by Vincent Novello

Vincent Novello was a major figure in London musical life in the first half of the 19th century and was well connected socially and professionally to key figures in the arts. The contents of the album reflects the importance of Novello and charts a fascinating period of British musical history. Born to an Italian family, he settled in England when he was 16 and devoted the rest of his life to furthering the cause of musical life and education in Britain. Novello’s interest in the music of previous generations meant that he built up a significant collection of music manuscripts from previous centuries. His work as an editor and publisher led to the formation of the company Novello & Co, which still exists today. Novello began compiling the album in 1829 when he and his wife journeyed to Austria to meet Mozart’s widow, Constanze, and son in Salzburg. Constanze contributed to the album herself, as did their youngest son Franz Xaver Wolfgang Mozart (known as Wolfgang Amadeus Jr), with a choral piece of his own, Die Nacht.

The album remained in the Novello family until it was consigned to auction in 1951 where it was bought by Novello & Co. Ltd. Novello & Co. was acquired by the Granada Group in 1970 and in 1989, Granada consigned the album and other Novello manuscripts for sale at auction where it was bought by the late Sir Charles Mackerras, the prominent conductor.