Lew Stone and his Thirties Sound

In London’s 1930s high life, only the smartest entertainment and only the freshest music would do – and these are what the new Monseigneur restaurant, opened in 1931 at 215 Piccadilly, promised its clientele.  Lew Stone (1898-1969), having already made a name for himself as a craftsman of snappy arrangements, was originally pianist and arranger for the band in residence – he can be seen at his duties here – but found himself in charge when its leader Roy Fox fell ill.  The music Stone then brought to the Monseigneur’s dance-floor made the band so popular that, by mutual agreement, he was given the job permanently.  At the helm of a band ranked among the best in London, he made recordings with Decca and radio broadcasts on the BBC, and became a household name in Britain, his musical career lasting until his death in 1969.

Lew Stone’s widow Joyce, who promoted her husband’s legacy energetically, presented many of his original manuscript scores to the British Library for its music collections.  The Lew Stone collection (British Library: MS Mus. 1746) is now in the process of being catalogued and includes not only full scores from throughout his career but individual instrument parts actually used when the band performed.  Some bear the scribbled names of band-members well-known in their own right, such as Nat Gonella (trumpeter), Don Barrigo (saxophonist) or Tiny Winters (bassist). 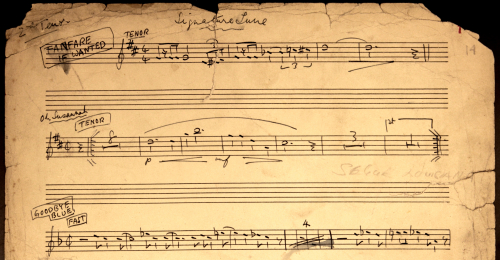 Many of the parts are scrawled over with cues and prompts: ‘Close in to ‘Mike’’, ‘Have Plunger Ready’ and ‘Remind Lew’ of how many bars to omit during broadcasts, or pencil drawings of spectacles to attract attention and avert disaster.  In some places the manuscripts are scorched, as if the musicians had perched lit cigarettes on their music.  Then there are the doodles: signs of missed vocations in the band? 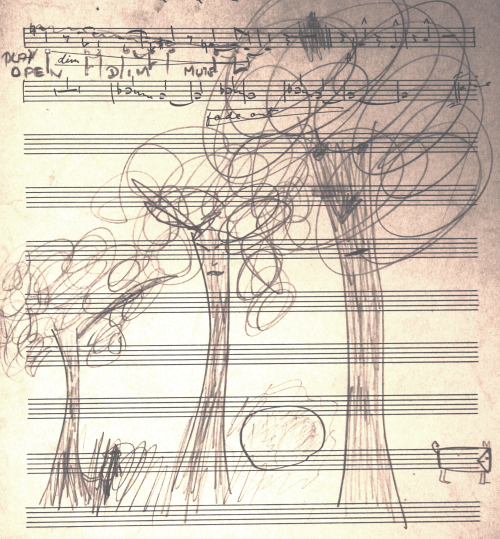 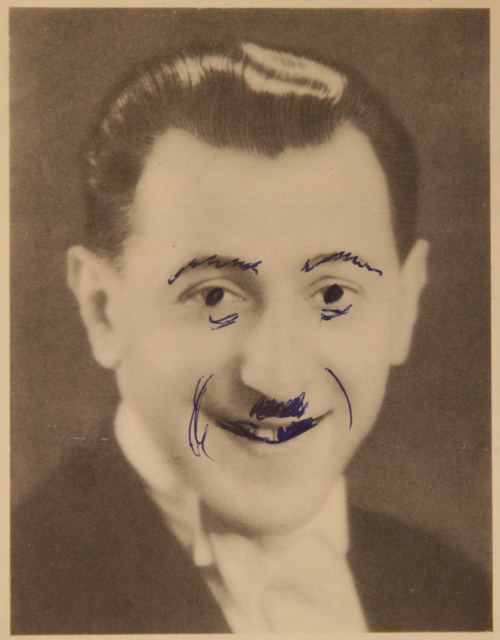 In addition to arrangements of popular melodies, romantic numbers or nonsensical melodramas sung by members of the band, several sets of scores are Lew Stone’s original compositions.  One tune, ‘Whispering Waters’, was composed by Joyce and arranged by her husband (clarinets to play ‘liquidly’).  There are some initial drafts and sketches for songs and collaborations with lyricists, and also incidental music composed for the 1940 film ‘Under your Hat’ (directed by Maurice Elvey).  And throughout the collection Lew Stone’s own adjustments and re-adjustments appear on the scores, the proof of how finely he tuned a sound that once livened up dance-floors and the airwaves all over the country. The British Library always attempts to identify copyright holders in order to give proper acknowledgement when reproducing their material. Please email music-collections@bl.uk if you believe you hold rights connected with any of the content included in this article.