Now and again the innocent toil of a music cataloguer is enlivened by something unusual, even unique.  A case in point is an early-19th-century sonata for piano five hands, enigmatically entitled Le souvenir.  It is a substantial three-movement work by the little-known organist, music teacher, composer and bookseller James Knottesford Ansell (1776–1860), once a resident of St Pancras parish in which the British Library now stands.  The style of the music is reminiscent of his younger contemporary Rossini, whose operas were then just beginning to take the musical world by storm.

Precise dating of music editions presents a perennial problem, but this copy displays two crucial pieces of evidence.  A faint but discernible watermark date of 1815 and a faint but discernible pencilled inscription by the composer to “Miss Coupland Novr 24th 1815 JKA” neatly combine to place the date of publication neither before nor after 1815.

Works for two, four and even six hands at one piano need no further explanation.  And there is a substantial literature of piano music for left hand alone, memorably featured in the horror film The beast with five fingers (1946).  This repertoire had already received a tragic boost when the Austrian pianist Paul Wittgenstein, elder brother of the philosopher Ludwig, lost his right arm in action on the Russian front during World War I.  Readers of an advanced age may also remember the three-hand piano duo formed by Phyllis Sellick and her husband Cyril Smith (not the Liberal MP!) after he suffered a paralytic stroke while on a concert tour in the same country.

Five hands, however, seems an eccentric diversion from the norm.  Ansell’s sonata bears a printed dedication to “Mesdemoiselles Loraine”, who may readily be imagined as three sisters receiving piano lessons from the composer.  At first I drew the obvious conclusion that the youngest, or the least competent, was as yet unable to co-ordinate two hands together reliably.  Then the idea took root in my mind that one of them had suffered a horrendous industrial accident while working in a satanic textile mill.  Or had she perhaps lost an upper limb during the Napoleonic conflict so recently concluded, before her French family took refuge in England? 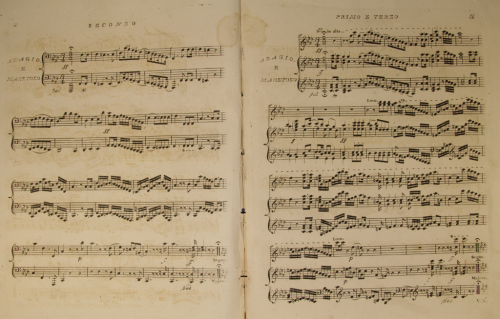 The music is laid out in the fashion familiar to piano duettists, the bass or secondo part on the left-hand pages and the treble or primo part on the right, with an extra stave above each line of music to accommodate the one-handed terzo part.  Whether this was intended to be played by the right or the left hand is unclear: a smart young lady would probably have cheated by using both.

We may never know the full story behind this intriguing work, but we may take pride in the achievement of a visionary British composer.  His originality still resonates today in the closed world of music cataloguing as the progenitor of a hitherto unknown Library of Congress subject heading “Sonatas (Piano, 5 hands)”.