From the British Library Schubert archive: some collectors of Schubert's music

The 220th anniversary of the birth of Franz Schubert (1797-1828) at the end of January 2017 provides a welcome excuse for us to explore the rich Schubert holdings at the British Library. Drawing on materials assembled by several important collectors, these range from curiosities relating to the man himself to sources documenting practical engagement with his music.

Collectors collect all sorts of things. The same Frederick George Edwards who gathered a leaf from MozartŌĆÖs grave also collected one from SchubertŌĆÖs. 'Grave-leaf collecting' is admittedly an unusual activity. In a more conventional manner, the writer Stefan Zweig (1881-1942) began to amass famous signatures in his teenage years by waiting at stage doors and sending unsolicited requests to literary and artistic luminaries. 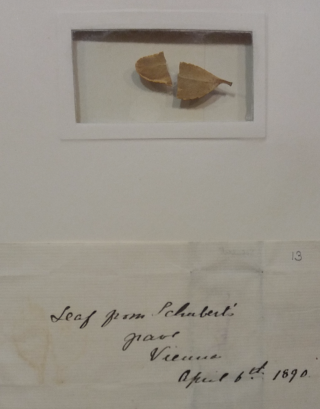 As the years passed, Zweig's desire to collect developed further, and he went on to assemble a wide-ranging assortment of manuscripts of musical, literary and historical significance. In later life, he bought, sold and traded scores by many famous composers, including Mozart, Bach and Wagner as well as Schubert. The collection formed at the time of his death (along with a few later additions) was generously donated to the British Library by his heirs in 1986. 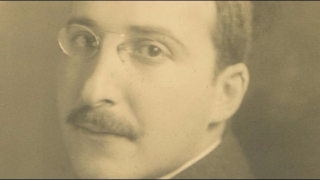 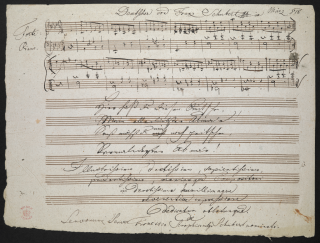 Zweig talks about collecting only the most representative examples of a particular composerŌĆÖs work, and in so doing trying to capture the essence of creation itself. His memoir, The World of Yesterday, also makes it clear that, for him, collecting wasnŌĆÖt purely about ownership:

Of course I never considered myself the owner of these things, only their custodian for a certain time. I was not tempted by a sense of possession, of having them for myself, but I was intrigued by the idea of bringing them together, making a collection into a work of art. I was aware that in this collection I had created something that in itself was worthier to last than my own works.

To a certain extent, collecting will always be a reflection of the individual undertaking it and the context of their time. This is evident in the activities of a slightly earlier collector, the pianist and composer Ernst Perabo (1845-1920). Perabo assembled a collection that included music in the hands of Beethoven, Bach, Mozart and other familiar names. This treasure trove also contains a number of autograph Schubert manuscripts, including the Mass in B flat (D.324), several songs, and the G major ŌĆ£FantasieŌĆØ piano sonata (D.894) (the latter to be made available on the Digitised Manuscripts website later this year). Most of PeraboŌĆÖs manuscript collection is thought to have been purchased from a sale in Leipzig in 1882, having originally been in the possession of the Austrian publisher Tobias Haslinger. 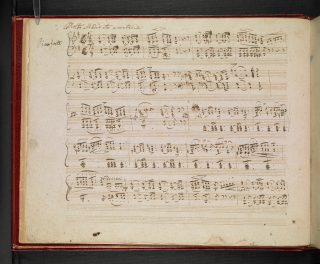 For several decades after his death, SchubertŌĆÖs piano sonatas were rarely performed. Perabo was among the earliest pianists to introduce them to the public. He noticed differences between the text of the manuscripts and published editions which he described in a journal article. He pasted a copy of the text at the end of one of his Schubert manuscripts, and presumably went on to incorporate his observations into subsequent performances. 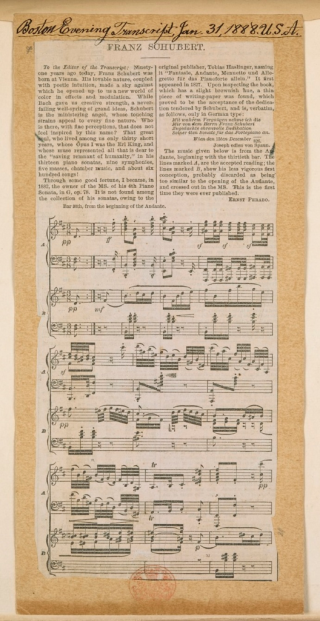 The details of another pianistŌĆÖs interactions with Schubert are also preserved in the British Library, courtesy of the collection of scores belonging to Clifford Curzon (1907-1982). These include Curzon's own copies of standard printed editions, marked up with annotations. Among them is the B-flat major piano sonata, D.960 (Add. MS 65057). The delicate and well-worn pages give a fascinating insight into his meticulous preparations for performance.

CurzonŌĆÖs collection also includes scores of LisztŌĆÖs arrangement of SchubertŌĆÖs ŌĆśWandererŌĆÖ fantasy (D.760). Such ŌĆśre-compositionŌĆÖ of SchubertŌĆÖs works occurred frequently. Examples include  the Viennese-operetta stylings of Franz von Supp├®, the Bert├®/Romberg/Clutsam sensation Lilac Time (as it was known in its UK version ŌĆō Richard Tauber played Schubert in the film version, Blossom Time), Anton WebernŌĆÖs distilled modernist orchestrations, and the postmodern re-imaginings of Luciano Berio and Dieter Schnebel (the latter based on the same piano sonata represented in the Perabo collection) .

Another example can be found in a printed score of Schubert string quartets formerly owned by the composer Gustav Mahler (1860-1911). This, along with other items from MahlerŌĆÖs library, had passed to the musicologist and publisher Donald Mitchell, who then deposited the materials at the British Library. In the 1890s, Mahler made an arrangement of Schubert's ŌĆśDeath and the MaidenŌĆÖ string quartet, D.810, for string orchestra. Mahler's lightly annotated copy of the score includes a few, characteristically fastidious, pencil annotations, providing an insight into the small amendments that he made in his own arrangement. 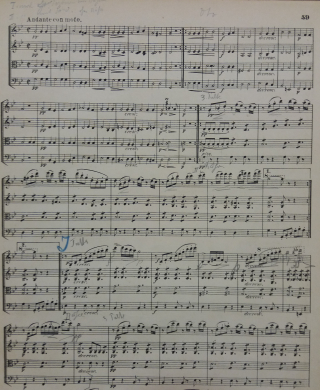