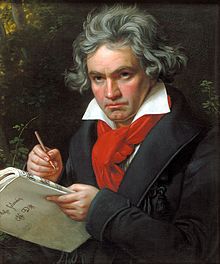 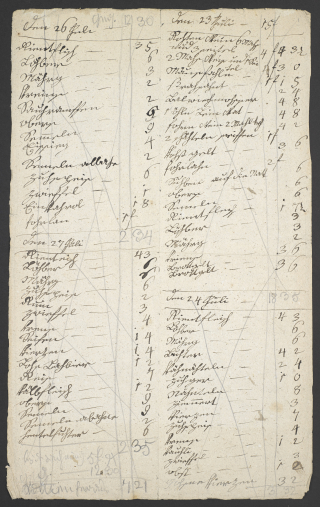 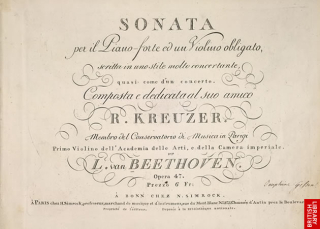 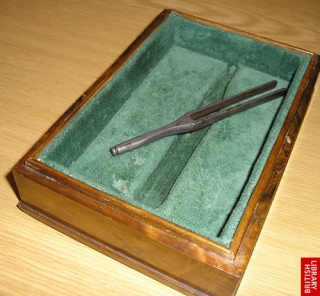 Beethoven‚Äôs tuning fork. British Library Additional MS 71148 A
Documentation acquired with the tuning fork allows us to trace its history in more detail. It seems it passed from Bridgetower to one Ulysses Bolton, then from Bolton to Paul Waddington and then from Waddington to John H. Balderstone. Balderstone went on to give the fork to the composer Gustav Holst in 1921. Holst then passed it to composer Ralph Vaughan Williams, whose widow, Ursula, went on to present it to the British Library in 1992.

This week sees the 330th anniversary of the death of naturalised French composer Jean-Baptiste Lully (1632-1687). Born Giovanni Battista Lulli to Tuscan parents, Lully moved to Paris in 1646, marking the beginning of a spectacular rise in his career and fortunes. His accession to the office of Surintendant de la Musique de le Chambre du Roi in 1661 heralded twenty-six years of dominance over music-making at Louis XIV‚Äôs court, ended only by his death from a famously self-inflicted wound sustained when conducting his own Te Deum.

This anniversary coincides nicely with a recent development in the British Library‚Äôs own Lully collection, relating to his trag√©die (or opera) Pers√©e. The premiere of this work in 1682 was promptly followed by two corresponding publications of the same year: the first was a particularly imposing score by Christophe Ballard in Paris, sole music printer to Louis XIV; the second was a curious set of string parts for the overture and airs of Pers√©e, printed by Jean Philip Heus in Amsterdam. 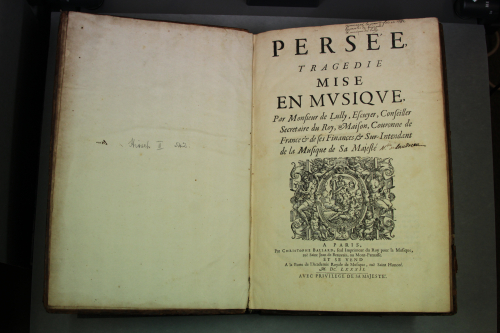 As well as holding three copies of Ballard‚Äôs score (Music Collections I.302, Hirsch II.542 and R.M.12.a.5), since 1924, the British Library has been in possession of an incomplete set of Heus‚Äôs string parts (K.7.c.2.). The only known surviving copy of Heus‚Äôs edition, this had lacked a Haute-contre de violon part since its acquisition some ninety-three years earlier. Remarkably, however, a copy of the missing part recently came to light and was acquired by the British Library. 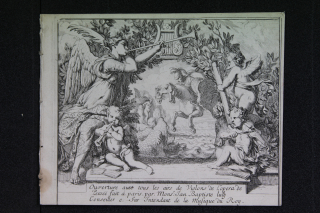 The engraved frontispiece shows Pers√©e, armed with the head of M√®duse, rescuing Androm√®de from the sea monster (Act IV)

In addition to being satisfying from a bibliographic perspective, the completion of this set facilitates comparison with the Ballard score published the same year. Ballard‚Äôs edition is the ‚Äòauthorised‚Äô text in both senses: it was produced in cooperation with the composer, who provided an extensive letter of dedication to the King, while the title-page declares that it was printed ‚ÄòAVEC PRIVELEGE DE SA MAJESTIE‚Äô. Heus‚Äôs publication, on the other hand, demonstrates a printer freely plundering the trag√©die for its instrumental highlights, clearly unperturbed by the ‚Äòprivilege‚Äô given to Ballard as the sole printer of Lully‚Äôs works.

The two editions also demonstrate quite different practical and economic approaches to music printing. Ballard‚Äôs rather grand and lavish offering is unlikely to have been constructed for performance, and was probably aimed at libraries of wealthy individuals or institutions. By contrast, Heus‚Äôs publication is very much a performing edition, possibly aimed at a growing middle-class market. Unlike Ballard‚Äôs edition, which was printed with movable type, it was produced using the considerably more fashionable technique of engraving. The result is a more florid and seemingly handwritten style, which would have appealed to this customer base. 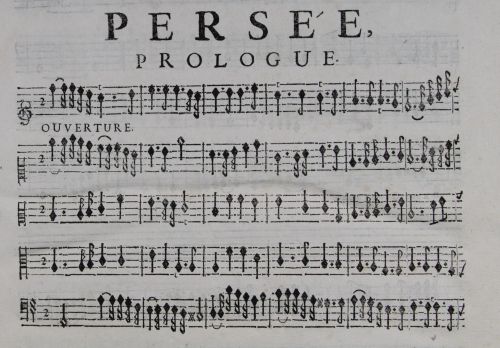 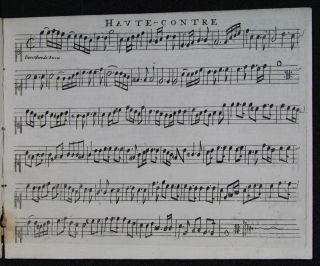 Heus‚Äôs edition of the overture and airs of Pers√©e constitutes an interesting example of cultural transfer between France and the Netherlands. In this case, highly-formalised music from the heart of the French royal musical establishment has been translated into a more ‚Äòpopular‚Äô and commercialised form for recreation among the Dutch middle classes. To a degree, these different musical and publishing outlooks might even be said to reflect the greater societal ideals and attitudes of the absolutist French state and the commerce-driven Dutch Republic.

A highlight of the work of British Library Music Collections this week has been hosting a visit of second and third year music students from King's College London studying sixteenth-century polyphony. 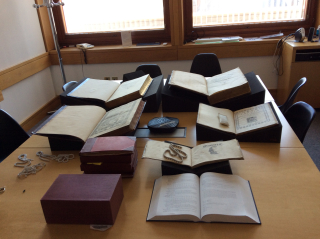 Display of printed items for the visit 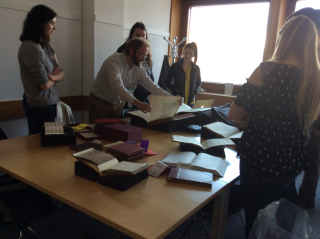 Students were also treated to a special introduction to some highlights from the collection of music manuscripts, including a set of partbooks belonging to Edward Paston (1550-1630) (Additional MS 29388-29392) and a choir book from the workshop of Petrus Alamire (Royal 8 G VII).

The choir book is available to browse in full online, and is also featured elsewhere on this blog. Dating from circa 1513 to 1544, it was probably produced for Henry VIII and Catherine of Aragon. In colours and gold, it includes a miniature depicting the royal arms with dragon and greyhound supporters. Also present are the heraldic emblems of the Tudor rose and pomegranate (the latter being Catherine's emblem). 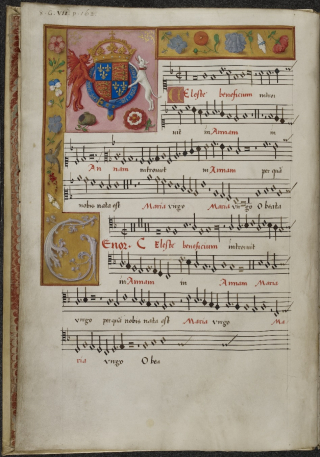 We're pleased to announce that a free trial to MGG Online is available in our St Pancras and Boston Spa reading rooms until 23 March 2017. 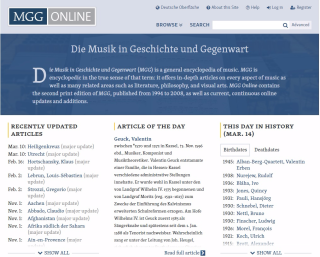 Die Musik in Geschichte und Gegenwart (MGG) is a general encyclopedia of music. It offers in-depth articles on every aspect of music as well as many related areas such as literature, philosophy, and visual arts.

Key benefits of the online version include:

To try MGG Online for yourself, go to http://www.mgg-online.com from any British Library reading room terminal. Please email any comments on the resource to music-collections@bl.uk.

Music and poetry from the Zweig Collection (20 March, 7pm)

As regular readers of this blog will know, the Stefan Zweig Collection is one of the jewels in the crown of the British Library. Featuring works by Bach, Haydn, Mozart, Schubert, Beethoven, Brahms, Wagner and Stravinsky, to name just a few of the principal composers, the collection offers a treasure trove of iconic musical masterpieces from the 18th to the 20th centuries. 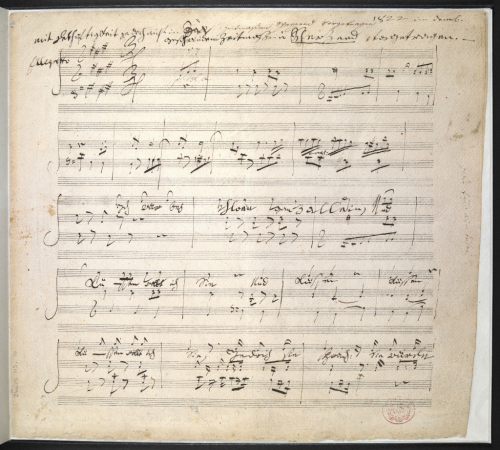 Zweig‚Äôs stated aim was to assemble a collection that represented the entirety of high European culture, literally bringing under his hands key works by what he considered to be a ‚Äòmagical circle of sublime figures‚Äô ‚Äì not only composers, but also literary and historical figures. Largely assembled between the two World Wars, the collection also gave tangible expression to Zweig‚Äôs hopes for European unity, an ideal dashed by the rise of Hitler and Zweig‚Äôs exile from the continent he loved.

A handsomely illustrated catalogue of the music manuscripts in the collection, with detailed descriptions and commentaries by Arthur Searle, was published in 1999. A companion volume exploring the literary and historical manuscripts, issued to commemorate the 75th anniversary of Zweig‚Äôs death last month, brings to life the breadth of his interests and literary sympathies, from Goethe to Balzac to Byron.  To mark this publication, we are hosting several events at the Library in St Pancras: a free exhibition of selected items from the collection in the Treasures Gallery (‚ÄòStefan Zweig: the Magic of Manuscripts‚Äô, until 11 June), a study day with invited speakers to explore the historical and cultural contexts for Zweig‚Äôs collecting (‚ÄòStefan Zweig: European, Humanist, Collector‚Äô, 20 March); and a recital of music and poetry from the collection (‚ÄòMusic and poetry from the Zweig Collection‚Äô, 20 March at 7pm). 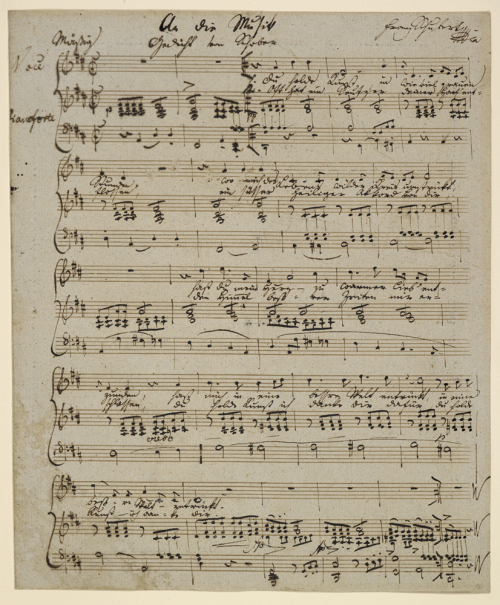 The recital will conjure up in words and music the culture that Zweig inhabited and the social and political climate that shaped his life. Featuring the actor Samuel West, with pianist Simon Callaghan, soprano Ilona Domnich and baritone Simon Wallfisch, the recital will include some of the most beautiful songs from the collection, ranging from Mozart and Beethoven to Hugo Wolf and Richard Strauss.  These will be interspersed with a narrative charting Zweig‚Äôs life and approach to collecting, with readings from works by Shelley, Keats, Verlaine and Wilde, among others.  Tickets for this event and the study day are available through the links above. 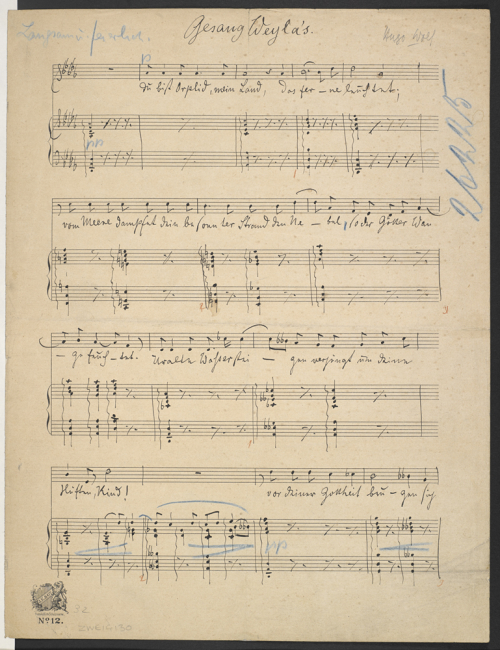 Posted by Rupert Ridgewell at 12:36 PM

What do world-champion ice-skaters Jane Torvill and Christopher Dean have in common with British Library Music Collections?

The answer lies in the content of the Zweig Collection, a cornerstone of the British Library‚Äôs holdings of music manuscripts, and the subject of one of our current exhibitions, a study day and a performance later this month.

In 1984, Torvill and Dean shot to fame at the Sarajevo Winter Olympics, receiving twelve perfect 6.0s and six 5.9s for their performance. They skated to Ravel‚Äôs captivating Bol√©ro (1928).

Within the Zweig Collection, we are fortunate to hold a version of this work for piano four hands  (Zweig MS 74). This dates from around 1929 and is for the most part in Ravel's own hand. The French composer was born 142 years ago today, 7 March 1875, so it seems fitting to celebrate this well-loved work in this post.

Bol√©ro takes its name from a Spanish popular dance or song, in which the dancers are called ‚Äúboleros‚Äù or ‚Äúboleras‚Äù. However, it quickly found favour beyond Spain, and was particularly popular in Paris. Ravel‚Äôs composition is characterised by obsessive repetitions of a single theme and a distinctive underlying rhythm. As the work progresses, the orchestration increases, and the work culminates with a dramatic climax.

Initially conceived under the title Fandango, Bol√©ro is one of Ravel‚Äôs late works. He described it as ‚Äúa masterpiece‚Ä¶without any music in it‚Äù and also once declared that he wanted it performed in a factory.

At the top left of the first page, the words ‚ÄúReduction pour Piano a 4 mains (original)‚Äù in pencil have been almost completely erased, but beneath them, ‚ÄúMaurice Ravel‚Äù is still easily legible. Over the erased portion, in what appears to be the same hand, is written in pencil ‚Äú1 - Manuscrit Piano 4 m.‚Äù. 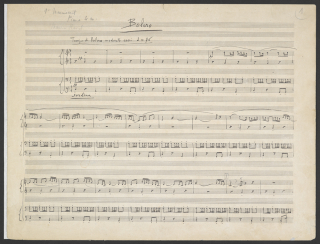 Although written largely in ink by Ravel himself, this manuscript includes annotations and corrections in pencil throughout. Some of these are in the composer‚Äôs hand, but, as with the inscription at the beginning, more still are the work of someone else. This could well have been an editor, their purpose being to bring the manuscript into line with the published score.

This manuscript can be browsed in full on the British Library Digitised Manuscripts website: http://www.bl.uk/manuscripts/FullDisplay.aspx?ref=Zweig_MS_74.