Imogen Holst, who was born on 12 April 1907, is well-known, among her many accomplishments, for her folk-song and folk-dance arrangements. Many of these published volumes, written for a variety of educational and recreational purposes, are available in the printed music collections here at the British Library.

Recently, however, we have come across a collection of Imogen Holst's folk-dance arrangements in her own hand which never made it into print. The manuscript, along with related correspondence, is contained within our recently-acquired Boosey & Hawkes archive, and gives further insight into Imogen Holst’s editorial approach to folk-song and dance, as well as her tireless commitment to the promotion of British music. 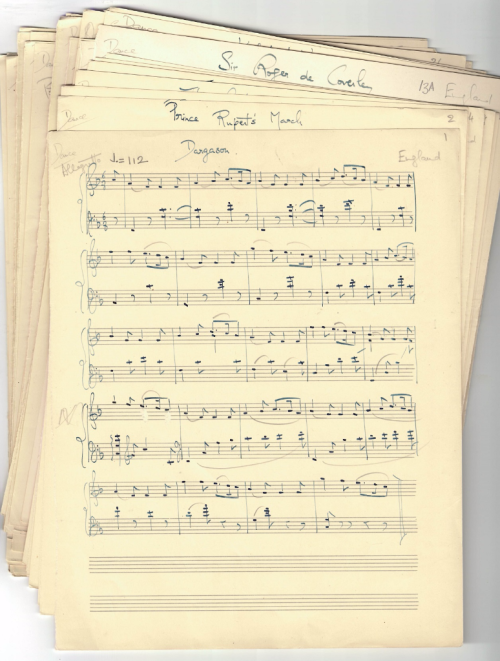 In June 1944, while she was busy running the music course at Dartington Hall, Imogen Holst received an invitation from the music publisher Boosey & Hawkes to edit and arrange two volumes of British folk-songs and dances for piano. She accepted with enthusiasm - ‘I cannot tell you what pleasure your suggestion gave me’ - and within 6 weeks had completed the manuscripts for both volumes.

The intention of Boosey & Hawkes was to promote the works internationally, capitalizing on pro-British sentiments in countries ‘where everything British will be much more appreciated after the war’. Imogen Holst replied that this was ‘a practical piece of internationalism that appeals to me very strongly’. Proofs for the first volume of folk-songs, complete with French and Spanish (but notably, not German) translations, were ready by January 1945, and publication followed in 1947.

However, the second volume of folk-dances remained in manuscript form. Languishing in the Boosey & Hawkes archive ever since, it contains piano arrangements for around 35 folk-dances from around the British Isles, along with handwritten introductions to both volumes. Imogen Holst had clear ideas about how folk-song and dance should be presented and was assertive about these in her correspondence with the company: ‘I feel very strongly indeed that most editions of traditional tunes are cluttered up with a lot of “expression” marks which might be all right in elaborate “composed” music of the 19th and 20th centuries but which are hopelessly out of place in simple tunes that sing themselves’.

Her keen stylistic sense, along with her understanding of traditional dance forms, also comes across in the introduction to the folk dances: ‘In the following piano arrangements the left hand has to supply the light, rhythmical accompaniment of the missing drum. Instead of providing solid harmonies it must let in the air between each rise and fall of the phrase, lifting the imaginary dancers off their feet’.

The related correspondence in the Boosey & Hawkes archive does not indicate why this second volume was never published. In 1951 Imogen Holst returned the volumes of folk-songs loaned to her by the publisher for the purposes of the project and a rather formal reply from Dr Rosen denied all knowledge of the current state of play regarding her work. By then Imogen Holst was set to leave Dartington and, after a period of travel in India, would soon become assistant to Benjamin Britten. Her subsequent dealings with Boosey & Hawkes were mostly concerned with this new creative partnership.

Imogen Holst, composer, conductor, writer, and administrator, was born on 12 April 1907 and died at Aldeburgh on 9 March 1984. Her archive is held at the Britten-Pears Library and has recently been catalogued as part of the Holst Archive Project. Please note that cataloguing of the Boosey & Hawkes archive at the British Library is ongoing and that access to the archive is limited until the project is complete.