The man who found the straight banana

Did you know that bananas first went on sale in London in April 1633?

Inspired by this fact, we’ve been delving into our printed music collections, and have discovered that the humble fruit has inspired a surprisingly large number of songs.

These include the romantically-titled 'When the banana skins are falling, I’ll come sliding back to you' (1926), the evocative World War 2 song 'When can I have a banana again?', and the catchy 1920s number 'Yes, we have no bananas'. 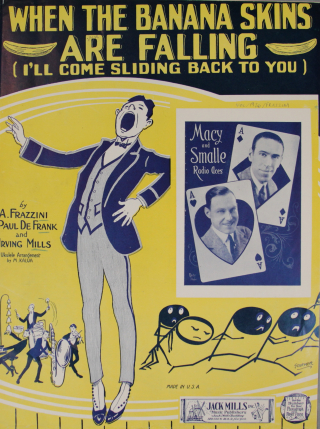 In our quest for banana-inspired music, we also came across a song entitled 'I’ve never seen a straight banana'. This piqued our curiosity, particularly in light of recent press coverage surrounding Brexit.

Apparently, one voter was swayed to vote in favour of leaving the European Union on account of regulations relating to banana shape. As a BBC news article explains, according to European Commission Regulations:

As our music collections reveal, though, concerns over banana shape, be they light-hearted or official, are not a new phenomenon. The comic song ‘I’ve never seen a straight banana’ dates from 1926 and was written by the elusive British music hall comedian Ted Waite. Our copy is an arrangement for banjo and ukulele – described as “banjulele” on the edition. 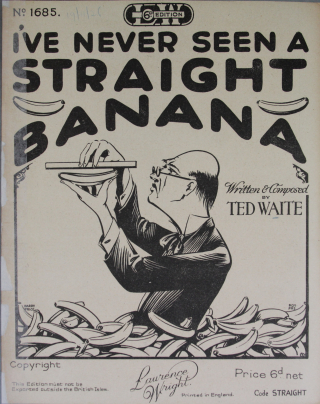 In 1927, it was made popular by American bandleader Fred Waring whose band, Waring's Pennsylvanians, recorded it.  The chorus runs:

And seen them lying down.

I’ve tried everywhere to find one,

Waite’s song was quickly “answered” by one Waff Walker. Setting words by Harry Arthur, he composed ‘I’m the man who found the straight banana’ in 1927. This went on sale the same year for the modest sum of sixpence. 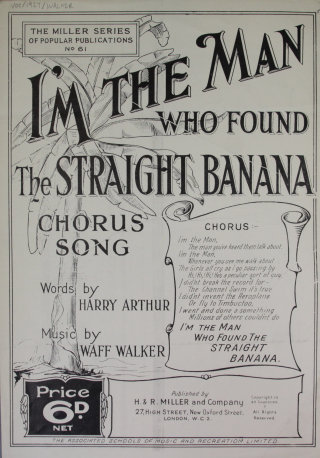 Described as a “chorus song”, suggesting it could be sung by a group rather than as a solo, the final lines boldly declare:

I went and done a something

Millions of others couldn’t do

I’m the man who found the straight banana.

To explore these and other banana-related music items in our collections, visit our Explore catalogue and search for “banana music”.