Bringing a forgotten opera to life

Following the revival of Handel’s music that took place in the mid-20th century, there are probably no more ‘authentic’ Handel operas to be rediscovered. This is not the case with his pasticcio operas, however.  In these ‘concoctions’ (or pasticcii), Handel put together a show by taking an existing libretto and recycling popular Italian arias written by other composers. English audiences of the time were no more proficient in Italian than today’s, but they enjoyed hearing a good tune and seeing a favourite diva perform.

Ormisda is the second of three pasticcii resurrected by the company, starting with Elpidia (1725) in 2016 and concluding with Venceslao (1731) in 2018. It is a tale of power, love and unhappy families. A wicked stepmother, Palmira, is determined to elevate her own son to the throne of Persia. She displaces his elder half-brother and disregards the feelings of the Queen of Armenia who is in love with the younger brother but destined to marry whoever becomes King of Persia.

Ormisda was first performed in 1730 at the King’s Theatre Haymarket under the direction of the composer himself. Although it has been assigned an HWV number, meaning it is officially part of the catalogue of Handel’s works, the piece contains hardly any of Handel’s original music. The busy and entrepreneurial composer wrote the work as a “quick win” to keep up his profile, whilst at the same time giving himself time to concentrate on two new operas, Partenope and Lotario.  Interestingly, neither had the box-office success of the crowd-pleasing Ormisda.

Inspired by musicologist Reinhard Strohm’s work on Handel’s pasticcio operas, Duarte came to the British Library to assess whether neglected pieces such as Ormisda were worth performing and had something to say to today’s audiences. At the centre of his research was Additional MS 31551, a manuscript score of Ormisda dating from the 18th century. He converted this into a digital form which he could use to create a performing score and orchestral parts. 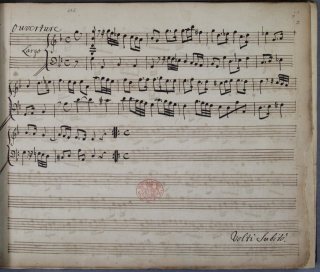 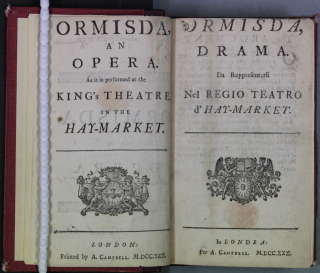 Digitised as part of the British Library’s partnership with Google Books, the word-book is likely to have been sold as a souvenir. Theatre lighting of the time would have made it unreadable in situ, and opera plots of the period are notoriously difficult to navigate. The extra help provided by the word-book suggests audiences then had attention spans – and linguistic skills – about the same as now. The Italian text was rendered into English by an uncredited translator; the translation is quite poetic, especially the arias, with rhymes and in metre.

The libretto is by the Venetian Apostolo Zeno (1669-1750) and the musical material has been identified as coming from Leonardo Leo, Orlandini, Hasse, Conti and others, with five arias as yet unidentified. “There is hardly a note of Handel’s in there – maybe the odd recit,” says Duarte. Handel’s contribution was to delete sections that were superfluous to requirements. He understood how to import Italian repertoire and make it attractive to London audiences.

Although it is a beautiful copy and easy to read,  the manuscript contains some crossings-out and sections that have been covered over. 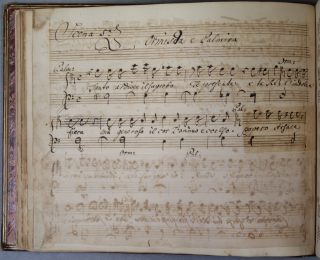 The word-book provides clues as to why that might be, since it contains crossings-out that match the score. These are complemented by manuscript annotations in an unknown hand such as “in score”, “not in score, but instead is the additional song… [sung by] Siga Merighi (Co) [contralto]”. 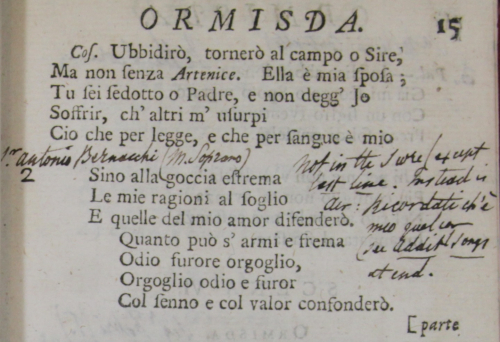 Having access to the British Library’s score and word-book side-by-side enabled Duarte to recreate a work that is not Handel’s, but has his stamp on it. This in turn provides a fascinating insight into Handel the showman and his understanding of what his audiences wanted.