Today (27 May 2017) is the eighty-ninth birthday of the Scottish-American composer Thea Musgrave, born in Barnton, Midlothian, but, since the mid-1970s, resident in the USA. Following a major purchase in 2009, with assistance from the Eccles Centre for American Studies, the British Library has the world’s largest institutional collection of Musgrave archival papers, which include music manuscripts, programmes, correspondence, and photographs.

Musgrave studied at the University of Edinburgh, enrolling initially as a medical student, before switching to study music, under Hans Gál and Mary Grierson. An important influence during that time was the legacy of one of Edinburgh’s former Reid Professors of Music, Donald Francis Tovey: Musgrave says she “read absolutely every word of Donald Francis Tovey”. After graduating from Edinburgh in 1950, having won its Tovey Memorial Prize, Musgrave moved to Paris to study with the celebrated pedagogue Nadia Boulanger.

It is from these Paris years (1950–1954) that the earliest material in the collection originates: the manuscript for a set of five songs to poetry by Ezra Pound and Louis Macneice, premièred at the Cercle de l’Union Interallié in Paris, on 16 May 1951, with Musgrave herself as the pianist and Doda Conrad as the baritone. Although Musgrave does not use opus-numbers (with the exception of her Divertimento for string orchestra, op.15), she refers to this set informally as her opus one. 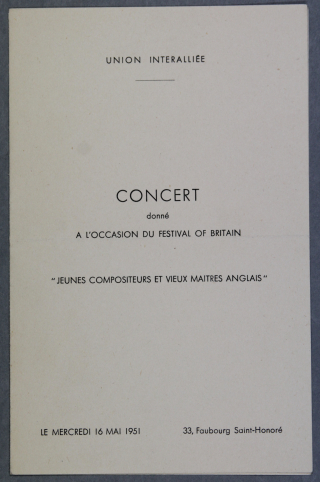 Inside of the programme for a concert at the Cercle de l'Union Interallié on 16 May 1951. The Musgrave songs are listed as the sixth item (the items are demarcated by Roman numerals). In this programme, the make of the pianoforte (in this case, a Pleyel) is specified. 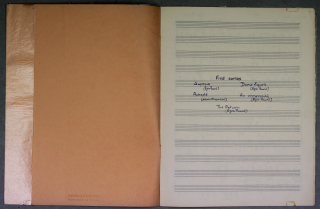 Contents-page of the autograph manuscript for the set of five songs to poems by Pound and Macneice (misspelt as "Macniece"). Copyright (c) Thea Musgrave and Novello & Co Ltd; reproduced by kind permission of the same.

The programme has some evident typographical errors, misspelling Macneice (as “Macniece”) and ‘An Immorality’ (as “An Immortality”). More interesting, however, is a discrepancy in the syntax: when compared with the manuscript, ‘An Immorality’ and ‘The return’ have been swapped. Meanwhile, the title of the concert, “jeunes compositeurs et vieux maîtres anglais”, characterises Musgrave as an English composer — this is probably an erroneous conflation of English and British, rather than a belief that Musgrave were English.

Among the other performers in the concert was the pianist Luise Vosgerchian, who, although not involved in performing Musgrave on this occasion, was the dedicatee of a subsequent Musgrave composition, the first pianoforte sonata, completed in January 1952. The British Library has the fair copy for this work, which is withdrawn.

Musgrave also withdrew three of the five songs in the aforementioned set, resulting in a pair of songs, both settings of Ezra Pound. 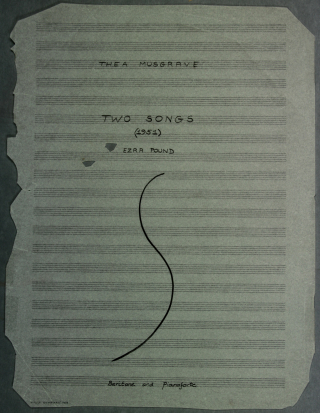 Title-page of the fair copy of the two songs, both to texts by Pound, not withdrawn from the set of five songs. Copyright (c) Thea Musgrave and Novello & Co Ltd; reproduced by kind permission of the same.

Whatever Musgrave’s reasons for this partial withdrawal, the manuscript is a fascinating record of an early case of Musgrave’s wont for collecting texts from more than one author in a single song-cycle — this approach of text-setting as anthology becomes more pronounced in several of her later vocal and choral works, the most recent of which is The Voices of Our Ancestors, which was premièred, in London, on 9 July 2015.

Following her studies with Boulanger, during which she was awarded the Lili Boulanger Memorial Prize, Musgrave returned to the UK, where she was in demand not only as a composer, but also as a pianist, lecturer, and, in due course, conductor of her own work. From the late-1950s, Chester Music was her publisher, until she moved to Novello in the mid-1970s.

Yet, a number of her subsequent works remain unpublished. Of the unpublished works represented in the collection, a suitably festive example is her contribution to a set of variations on Happy Birthday. 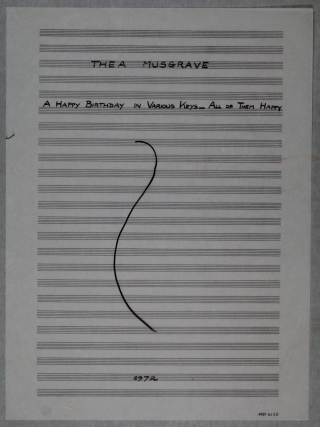 Title-page of the fair copy of Musgrave's variation on Happy Birthday, written as part of a set to celebrate the seventieth birthday of William Walton. Copyright (c) Thea Musgrave, Chester Music Ltd, and Novello & Co Ltd; reproduced by kind permission of the same. 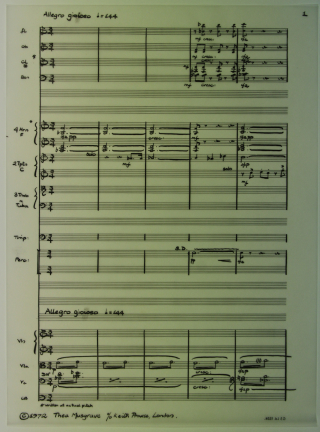 First page of music in the fair copy of Musgrave's variation on Happy Birthday, written as part of a set to celebrate the seventieth birthday of William Walton. Copyright (c) Thea Musgrave, Chester Music Ltd, and Novello & Co Ltd; reproduced by kind permission of the same.

Musgrave’s “variation in one minute” is third in the set, with the other composers being Richard Rodney Bennett, Malcolm Arnold, Nicholas Maw, Robert Simpson, and Peter Maxwell Davies (the latter's contribution now housed in the British Library as Add MS 71323). The set was premièred by the London Symphony Orchestra on 28 March 1972, the day before William Walton’s seventieth birthday, in the Royal Festival Hall. A recording is available in the British Library’s Sound Archive, at shelfmark C1398/0775.

Although the Musgrave collection does not include the programme for this concert, there are hundreds of other programmes relating to Musgrave — some were collected by her, and many more were sent to her by performers, promoters, and friends. These document the significant influence and reach of Musgrave’s oeuvre in various continents, and not just in the English-speaking world.

For example, in 1988, Musgrave and her husband, Peter Mark, visited Jerusalem for a tour in which each of them conducted the Jerusalem Symphony Orchestra. Musgrave’s concert comprised four of her own compositions from various points in her career to date, cumulatively spanning a period of twenty-three years. Conveniently, the programme is bilingual: 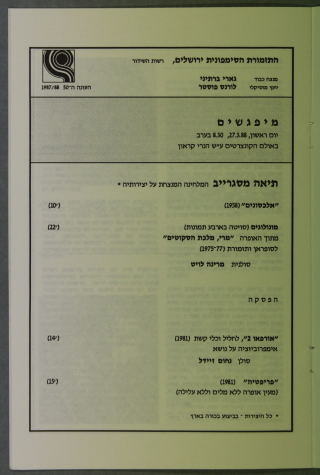 A page, in Hebrew, from a programme for a concert of Musgrave orchestral works in the Henry Crown Symphony Hall, Jerusalem on 27 March 1988, performed by the Jerusalem Symphony Orchestra, conducted by Musgrave. 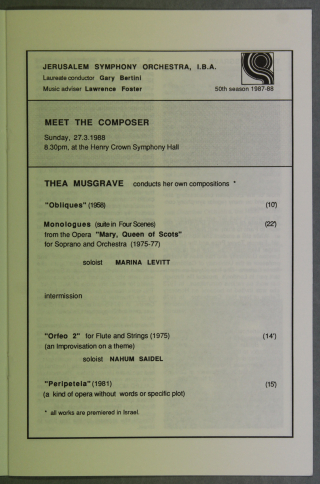 The corresponding page in English from the same programme.

Not all programmes have a translation into English so readily available. In respect of the world première of Orfeo III, which took place in Moscow on 9 October 1993, Musgrave annotated the programme with a translation of the key information. 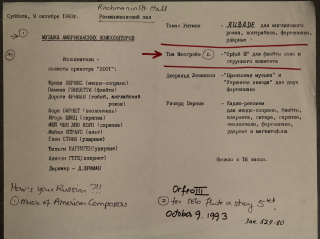 Programme for a concert in the Rachmaninoff Hall, Moscow State Conservatoire on 9 October 1993, featuring the world première of Musgrave's /Orfeo III/, performed by Orchestra 2001, conducted by James Freeman. Musgrave was not present at the concert, but has annotated the programme with an outline translation. Annotations copyright (c) Thea Musgrave and Novello & Co Ltd; reproduced by kind permission of the same.

As the numeral suggests, Orfeo III, scored for flute and string quintet, is a transcription based on two earlier compositions. This transcription was written for Orchestra 2001, conducted by James Freeman. Here, Musgrave is presented as an American composer, sharing the programme with Thomas Whitman, Gerald Levinson, and Richard Wernick. By 1993, Musgrave had been permanently resident in the USA for almost two decades.

This performance in Russia is by no means the only case of Musgrave’s compositions touring continental Europe. Indeed, some of her works have received greater attention on the continent than in the UK, her country of birth. Indeed, Musgrave’s opera Simón Bolívar, completed in 1992, received its European première in Regensburg on 31 March 1995, and has yet to be performed in full in the UK. 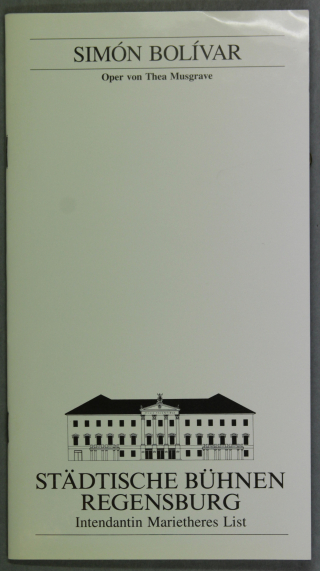 Front cover of programme for the first European production of Musgrave's opera Simón Bolívar, at the Städtische Bühnen Regensburg in March 1995.