Today (30 June 2017) is the seventy-first birthday of the composer Giles Swayne, born in Hitchin, Hertfordshire. Swayne’s undergraduate education was at Trinity College, University of Cambridge, where he studied classics and music. This was followed by postgraduate study in composition at the Royal Academy of Music under Harrison Birtwistle, Alan Bush, and Nicholas Maw. Like most composers, Swayne’s early career featured a range of related musical activities. These include working as a répétitur at Glyndebourne in 1973–1974, and as an editor for Novello, which was also his publisher from the late-1970s to 2002, after which he switched to the publishing company he had founded in 2001, Gonzaga Music.

The British Library possesses two major Swayne holdings. The first consists of recordings made by Swayne in 1982 of Jola music in Senegal and the Gambia. Traditional musics from various African cultures are an important influence on much of Swayne’s compositional output, starting with CRY, op. 27, an eighty-minute work for twenty-eight amplified voices and electronic treatment composed in 1979 and dedicated to Messiaen, with whom Swayne had recently studied as a visiting member of Messiaen’s class at the Paris Conservatoire in 1976–1977 (one of the errands Swayne ran for Messiaen during that time was to obtain English-language ornithological books). In his programme note for the work, Swayne speaks of a fascination with a recording which he first heard in 1977 of music from the Ba-Benzele pygmies: “I played the record until it was nearly worn out, then tried to work out how the music was put together.”.

The second holding, acquired last year, is the Giles Swayne Collection, containing music manuscripts, scores, and work-books dating from 1968 to 2015. This material elucidates some of the processes Swayne deploys in his approach to composing. One recurrent process is his construction and deployment of modes. The utilisation of these modes is rendered explicit in his Bagatelles for solo pianoforte, of which Book 2 was the first to be published, in 2012. For the Bagatelles, each individual piece is allocated a particular numbered mode: for example, the eleventh uses “mode 11 on B-flat”. The mode itself is written-out in a draft of the work: 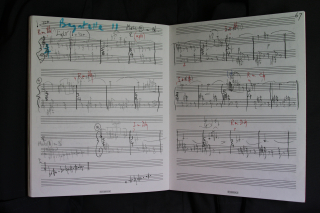 Composition draft of the opening of the eleventh of Swayne’s Bagatelles. Ff. 66v–67r of work-book 85. British Library shelfmark: MS Mus. 1808/1/25. Copyright © Giles Swayne and Gonzaga Music; reproduced by kind permission of the same.

This is part of a larger schema for the allocation of a whole family of modes across Swayne’s Bagatelles (including those not yet composed): 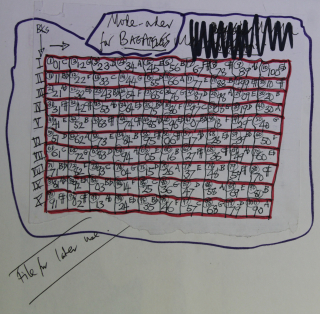 Grid outlining the allocation of modes among his Bagatelles for solo pianoforte. Verso of the first leaf after the front cover of work-book 81. British Library shelfmark: MS Mus. 1808/1/24. Copyright © Giles Swayne and Gonzaga Music; reproduced by kind permission of the same.

Swayne’s process for assembling a family of related modes resembles the construction of a tone-matrix in dodecaphony through processes of transposition, retrograde, and inversion. However, this modal lexicon differs from dodecaphony in that it does not seek to utilise all twelve pitch-classes. A wont for limiting the pitch-material can, arguably, be traced back to CRY and to the impact of Swayne’s first hearing of the traditional music of Ba-Benzele pygmies in 1977, after which he cultivated a compositional style with an aversion to the high density of distinct pitches often associated with dodecaphony, instead seeking, as he describes in his programme-note for CRY, “to shift the musical weight from the pitch and harmony to rhythm”.

A closer scrutiny of the means employed by Swayne to construct his modes can be discerned from the sketches for his Symphony no. 1, op. 112 (not to be confused with his earlier work Symphony for small orchestra, op. 37, where the label “Symphony” is intended to be ironic). These demonstrate a systematic approach, grounded in atonal theory, to the assembly of modes, one which might be compared to Messiaen’s modes of limited transposition or to Slonimsky’s Thesaurus of Scales and Melodic Patterns. However, Swayne’s methodology for assembling modes seeks neither the restrictions characteristic of Messiaen’s modes nor the exhaustiveness of Slonimsky’s collection. Rather, Swayne’s collection of modes is assembled by dividing the octave into two cells starting a tritone apart, each cell containing four notes and sharing the same Basic Interval Pattern (that is, the combination of intervals between each pair of adjacent notes, including the first note of the next cell to complete the last pair), but with different Successive-Interval Arrays (that is, the permutation between the aforementioned pairs).* 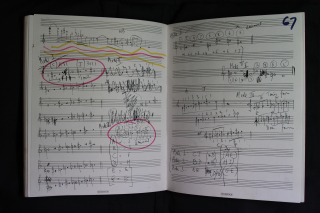 The array of transpositions of Mode I present on the left is derived from the mode itself, the result being that the mode can be discerned both horizontally and vertically. Swayne equates the role of the tritone, as the bisector of the modes, to the “dominant”, a term which alludes to the vocabulary of diatonic functional harmony. This allusion is furthered by Swayne’s selection (the circled passages on the left of the “dominant” form of Mode III (with G-sharp as the root) to counterbalance the “tonic” form of Mode I (with D as the root), a procedure which could be said to parallel the role of the dominant key as a source of contrast in musical forms governed by diatonic harmony.

When it comes to situating the role of the modes in the compositional process, the lacunae offer a hint as to Swayne’s workflow: 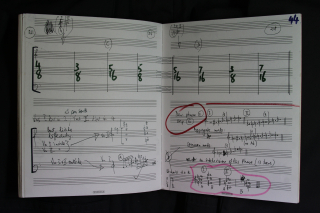 Sketches for the Symphony no. 1, op. 112, showing a passage for which some facets have been drafted very precisely, and others yet to be determined. Ff. 43v–44r of work-book 81. Shelfmark: MS Mus. 1808/1/24. Mode I and Mode II (which has the Successive-Interval Array 1‒1‒2‒2‒1‒2‒1‒2, each cell thus having the same Basic Interval Pattern as Mode III) are combined, with the union (“Aggregate mode”) containing eleven pitch-classes and the intersection (“Common mode” — that is, the notes common to both modes) containing five. At the bottom, Swayne constructs two “Urchords” for each mode, the first chord utilising (from bottom to top) the 8th, 5th, 1st, & 3rd degrees of the mode, and the second chord utilising the 2nd, 6th, 7th, & 4th degrees of the mode. Copyright © Giles Swayne and Gonzaga Music; reproduced by kind permission of the same.

Here, Swayne has indicated the quantity of bars, their time-signatures, and the modes to be deployed therein. The near-absence of individual notes and rhythms suggests that they may not have been determined at the time that this sketch was written (alternatively, this absence may denote an abandoned attempt at a fair copy, but the context renders such a conjecture implausible). In other words, it seems that, as with the Bagatelles, the deployment of modes in his Symphony no. 1 is a structural element determined at an early juncture.

The Giles Swayne Collection affords rich insights into some of his compositional processes, although it also raises many questions. Foremost among them is the question of what Swayne will compose next. He is most prolific as a composer of choral music, and his output includes commissions from both amateur and professional choirs, and especially the choir of Clare College, University of Cambridge, where he was Composer-in-Residence from 2006 to 2014. Nonetheless, the numeration of his Symphony no. 1 seems to suggest that Swayne is open to commissions for another symphony…

*A Successive-Interval Array is a means of describing of a scale, mode, or set of notes in terms of the intervals between each adjacent pair of notes, resulting in a series of numbers which denote the successive intervals, in semitones. The term is utilised by Parks in his book The Music of Claude Debussy to describe pitch-class sets in a manner which takes account of the permutation of intervals between adjacent pitches. A Basic Interval Pattern (as conceived by Forte in his book The Structure of Atonal Music) describes the combination of the aforementioned intervals present, but ordered according to size of interval rather than according to their syntax within the scale, mode, or set of notes itself.