Shostakovich at the V&A

We continue our series of blog posts serving as accompaniment to the current V&A exhibition: ‘Opera: Passion, Power and Politics’ which features several items from our Music Collections. On this occasion we focus on ‘Lady Macbeth of the Mtsensk District’ Op 29 by the soviet composer Dimitri Shostakovich. The dramatic events surrounding this work compete with those taking place on stage. 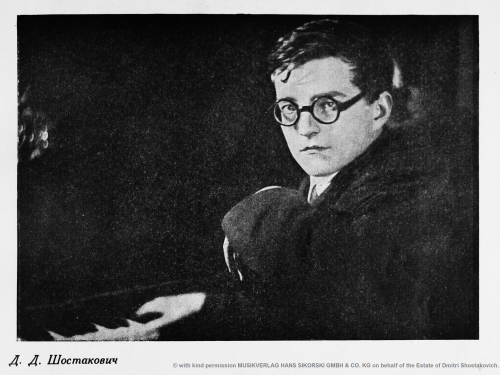 Lady Macbeth was composed between 1932 and 1934, with a libretto by Shostakovich and Alexander Preys. The story is based on a novel by Nikolai Leskov which takes place in the Russian pre-revolutionary days of serfdom. The unlikely heroine is Katerina Ismailova, the wife of a rich merchant from a bleak provincial town. Consumed with the crushing boredom of her empty life she becomes the mistress of one of her husband’s servants. When found out she murders her father–in-law and later, her husband. They are then sent to Siberia, where her lover forsakes her for another woman. In mad desperation, she kills her rival and then herself. 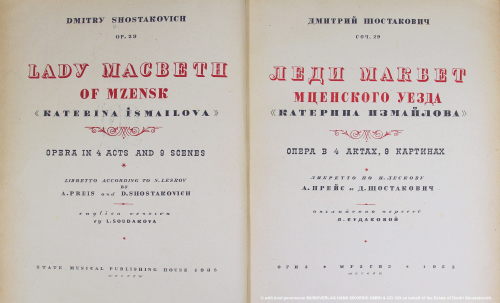 Titlepage from the first edition of Lady Macbeth of the Mtsensk District’, (Moscow, 1935) G.1435

The British Library holds a rare vocal score of the opera, published in 1933 before its premiere and two years before the first regular edition shown in the image above. 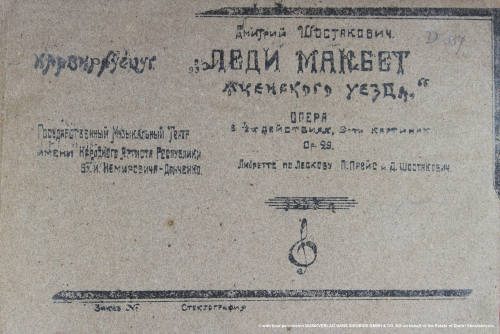 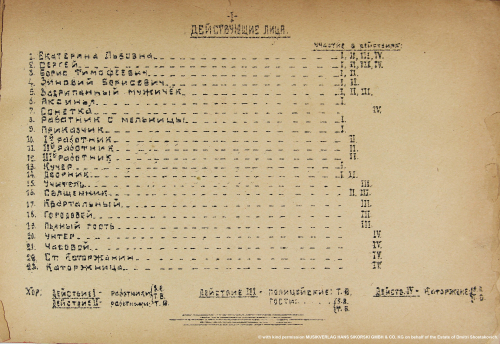 Its rudimentary printing method and paper quality are indications that it may have been intended for limited rather than wide distribution. These were copies that perhaps circulated among musicians and collaborators during rehearsals for the Moscow production. 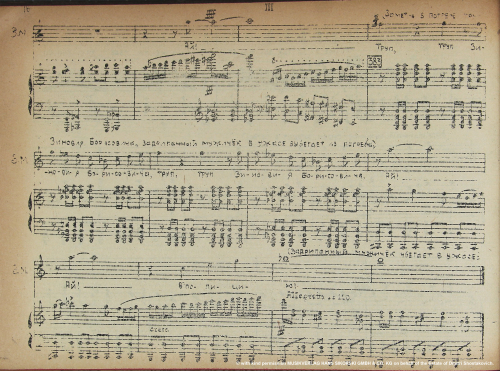 Lady Macbeth was premiered on 22 January 1934 in the Leningrad Malyi Opera Theatre with Samuil Samosud, who had been a close collaborator of Shostakovich in the latter stages of the production, as conductor. Two days later it opened in the Nemirovich-Dachenko Theatre in Moscow.

The London premiere took place at the Queens Hall on the 18th of March 1936, under the baton of Albert Coates. Among the audience there was a 22-year-old Benjamin Britten who was especially impressed by the entreact music. One can only speculate whether he was equally impressed by the tenor singing the minor part of '2nd Foreman'. It wasn’t until later on that year that Britten formally met Peter Pears, who would become a lifelong personal and professional partner. 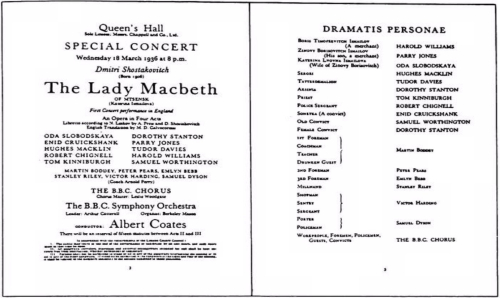 Our Music Manuscripts collection has a manuscript copy of the full score which appears to have been used in the preliminary stages of the London production. The music was copied by Soviet hands while the text was added later on in England. It follows the English translation prepared by the musicologist Michel Calvocoressi, while the music reflects earlier versions of the opera. Several pencilled cuts and annotations, probably by the conductor himself, are present throughout the score 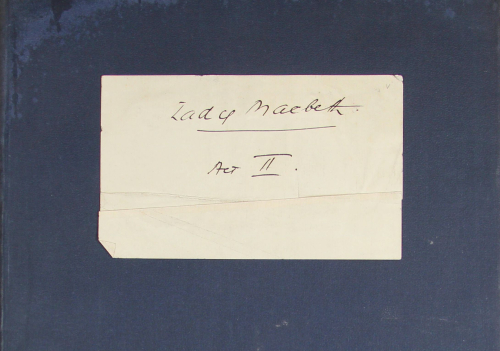 While there was some initial criticism regarding the naturalist use of the music and the choice of subject, Lady Macbeth was a firm success. It was performed hundreds of times in its first two years, both in the Soviet Union and abroad. The Daily Herald called it ‘the Best modern opera since ‘Wozzeck’, while the Sovetskaia Muzyka praised it as “the chef d’ouvre of soviet creativity”. Lady Macbeth of the Mtsensk District was hailed as the first great proletarian opera. 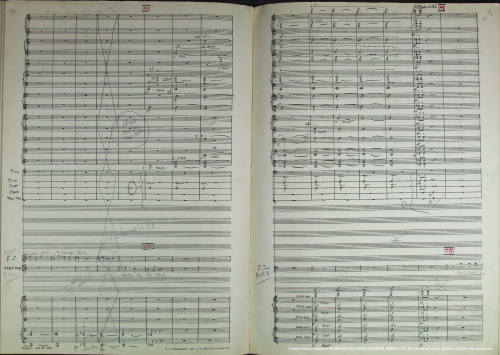 Shostakovich’s fortunes would be dramatically reversed on the evening of 22 January 1936. The composer was requested to attend the Bolshoi Theatre in Moscow for a production of the opera. Upon reaching his seat, he saw in the box across the stage were three of the most powerful men in the Soviet Union, Andrei Zhanov, Anastas Mikoyan and none other than Joseph Stalin himself. As the opera progressed, Shostakovich witnessed with horror how they winced and laughed every time a loud note emerged from the orchestra pit. Before the end of the third act, they had left the theatre.

Two days later the Communist Party’s official newspaper, Pravda, published an article which has since been considered as one of the most prominent examples of art censorship. 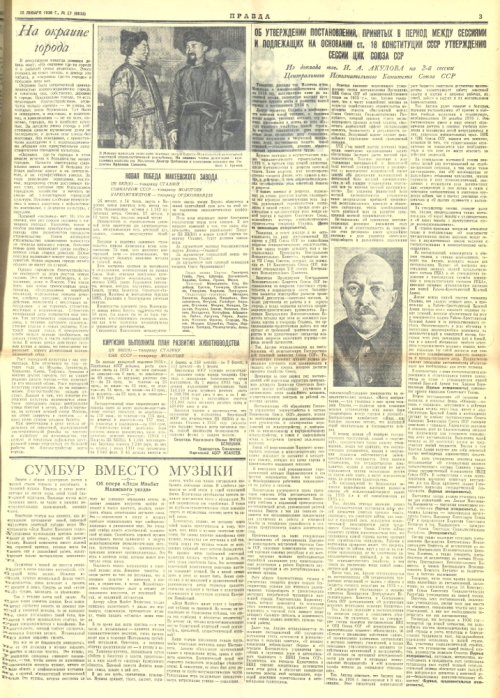 This page comes from the Pravda issue of 28th January 1936, a copy of which is in our Newspapers Collections. On the bottom left we can see the fateful article, which was titled 'Сумбур вместо музыки – Об опере Леди Макбет Мценского уезда’, or 'Muddle Instead of Music: On the Opera Lady Macbeth of the Mtsensk District'. Here Shostakovich is condemned as formalist, while giving in to bourgeois tastes. The music, on the other hand, “quacks, grunts, growls and suffocates itself.” His status as the foremost soviet composer rapidly dissolved into the paranoia and repression of the Great Purge, which unravelled that year.

His peers from the Leningrad Composer’s Union unanimously voted to support the Pravda article. Shostakovich had no other choice than to buckle under party pressure and withdraw his Fourth Symphony shortly before its premiere. He would never write another opera again and it was not until 1963, after Stalin’s death, that Lady Macbeth was performed again, revised, and under a different name and opus number: Katerina Ismailova, op. 114 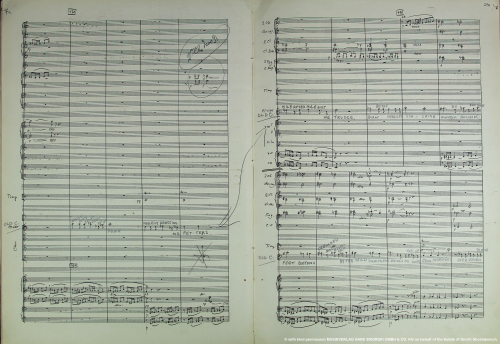 This would be the first of two public denunciations of Shostakovich's music, the second of which took place in 1948. From both he was officially rehabilitated after managing to court back regime favour. This resilience and artistic conviction are captured in a 1943 letter to his friend Sir Henry Wood1 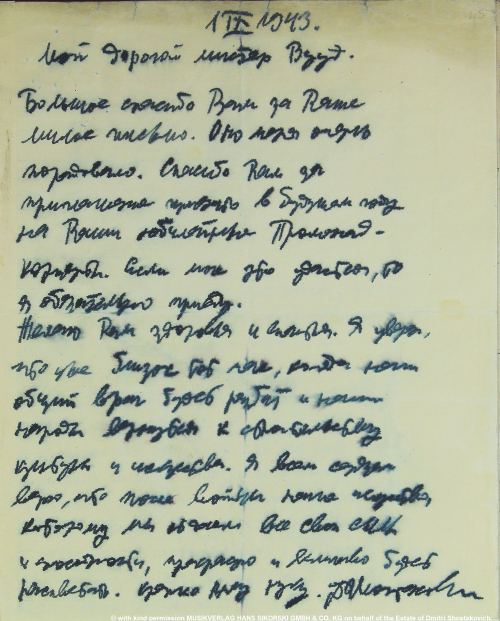 (…) I am sure that the hour is near when our common enemy will be smashed and when our peoples will be able to resume their upbuilding of culture and art. With all my heart and soul I believe that after the war our art, to which we give all our efforts and abilities, will flourish with redoubled glory and magnificence.

We would like to thank Ms Shostakovich and Mirjam Eck-Yousef from Sikorski Music Publishers for their kind authorization to feature some of the images above.

Posted by Elias Mazzucco at 1:32 PM