A few steps (and mis-steps) in the early years of Beethoven’s Violin Concerto.

Beethoven’s Violin Concerto in D op 61 is regarded as one of the greatest achievements of the violin repertoire: a rite of passage for all violinists against which they measure their maturity as musicians. But the early life of the work was rather chequered, both before and after its premiere. Let’s have a brief overview to understand more:

In early 19th century Vienna, public performances of music looked very different. They were usually considerably longer than what we are used to today, often with more than one session featuring many works in each. For instance, on 22 December 1808 Beethoven premiered his Fifth and Sixth Symphonies, his Fourth Piano Concerto and the Choral Fantasy… and that was just half of the programme! 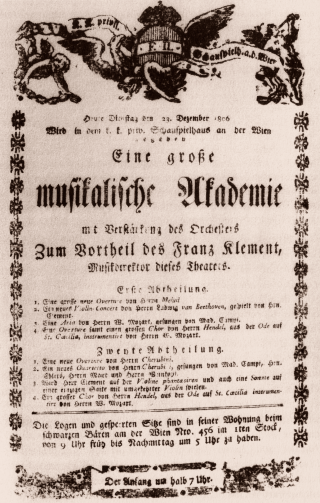 These types of performances were mostly single events like charity or benefit concerts organised by a musician to raise funds for his upkeep. A Great Musical Academy was then announced for 23 December 1806 for the benefit of the virtuoso violinist Franz Clement. This was the occasion on which Beethoven’s Violin Concerto was premiered.

The Violin Concerto shares that particular characteristic with other chef d’oeuvres in the sense that it was not appreciated as a masterpiece during the composer’s lifetime. A few weeks after the performance, the critic Johann Nepomuk Möse wrote on the Wiener Zeitung:

“With regard to Beethofen’s [sic] concerto, the opinion of all connoisseurs is the same: while they acknowledge that it contains some fine things, they agree that the continuity often seems to be completely disrupted, and that the endless repetitions of a few commonplace passages could easily lead to weariness. It is being said that Beethofen ought to make better use of his admittedly great talents....”1

One of the reasons that could explain this kind of reception lies in the process of composition, whose circumstances were far from ideal. This was perhaps reflected in the performance. Carl Czerny, a friend of the composer and celebrated musician himself, recounts that Beethoven finished the work barely two days before its premiere2. If this was the case the musicians wouldn’t have had enough time to prepare.

The myth tells us that Franz Clement, as the soloist, had to sight read his part during the premiere. Although this could have been partially true, particularly in the later passages of the concerto, in reality Clement would have seen much of the violin part before the concert, acting perhaps as an advisor to Beethoven. Another doubtful detail of the story says that Clement interrupted the performance of the Concerto between movements to show off his virtuoso skills. His motivation for this would have been to prove what he was capable of when able to rehearse a piece. As we can see above in the poster for the premiere this had been previously included in the programme, albeit with the same intention, as a ‘Sonata on a single string played with the violin upside down’. 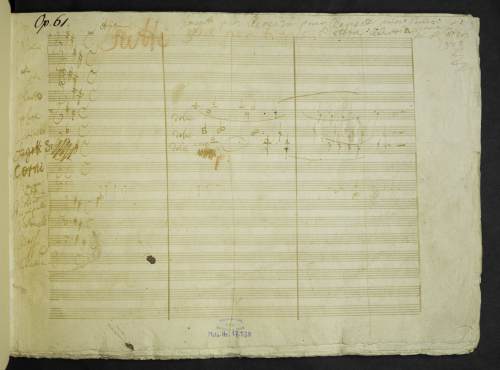 Only in November 1806, a few weeks before the premiere, did Beethoven start the first full scale writing down of the work in his autograph manuscript, which is part of the Music Collections of the Austrian National Library. There is a digital version which can be seen in full on their website.

The dedication to Clement contains a humorous pun pleading the violinist to show his clemency to the composer. Particularly in the last movement, we find signs of how hurried the creation of this masterpiece was. 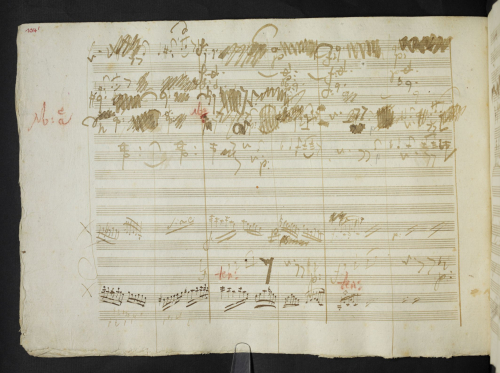 The violin part was written six staves from the bottom, under which we have the cellos (when they are not playing ‘col bassi’) and the double basses. The last three staves are left blank but interestingly in several passages they show alternative melodies for the violin. The variants in darker ink in seem to have been added after the premiere. 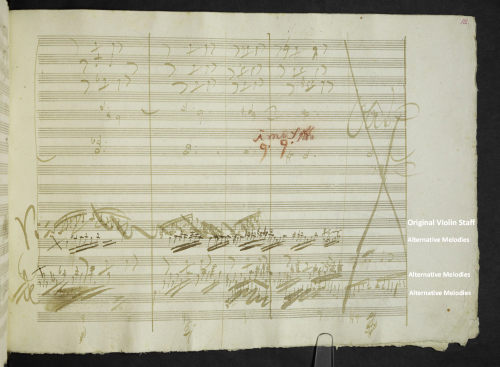 What was the immediate cause for these revisions? At least in part they were carried out because of a music publisher from London, eager to publish some of Beethoven works, took a somewhat tangential interest in the Violin Concerto. 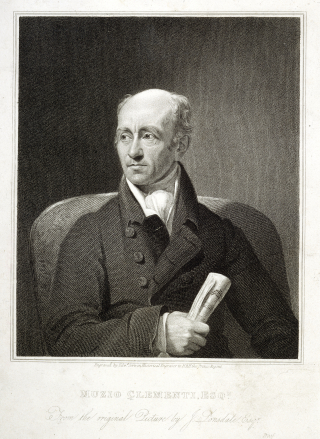 The Italian-born English composer, pianist and music publisher Muzio Clementi met Beethoven in 1807 as a partner of the firm Clementi, Banger, Collard, Davis & Collard.  He managed to obtain the English publishing rights of six works, among which was the Violin Concerto. Clementi was probably aware of its frosty reception the previous year and wanting to reap its commercial potential asked Beethoven to create a piano version. The composer obliged and an agreement was signed in April 1807.

Autograph manuscripts are often too messy for engravers to use as a reference against which to prepare the plates that produce a printed score. For that matter a copyist is employed to transcribe the work by hand from the original to a more legible document. We call this a manuscript copy. One such manuscript was prepared in mid-July 1807 for the first printed edition. The resulting document is held in the British Library, coming into our Music Collections almost 65 years ago as part of the Meyerstein Bequest. For the sake of clarity we’ll adopt Alan Tyson’s terminology and call this manuscript the ‘Meyerstein Copy’ from now on. 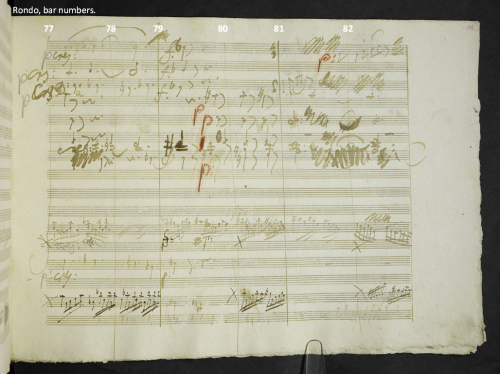 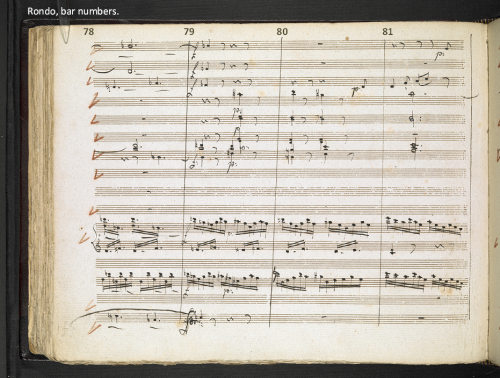 After it was completed, the Meyerstein Copy was returned to Beethoven who added corrections, mainly in pencil which were subsequently inked over by the engraver. There are several additions by Beethoven in characteristically Red Rottel, however not all of these are in the composer’s hand.  Almost exclusively these rectifications concern expression, dynamics, phrasing and accidentals. No notes are modified by Beethoven. This makes evident that between both manuscripts there was at least one more document where both the solo violin (especially for the first and third movements) and its piano transcription took their final form. Since this document hasn’t survived the Meyerstein copy has the significant value of being the primary source for the solo parts of one of the most highly regarded Violin Concertos.

Beethoven’s skills at the piano are beyond dispute, but whether he was skilled at the violin is not well documented. As proposed above, it is plausible that a violinist would have advised him during the composition of the Violin Concerto. In the Meyerstein Copy there are signs of a similar collaboration. Franz Clement is, of course, a possible candidate. However, at the end of the Meyerstein Copy we find the message in French (not in Beethoven’s hand) “Pössinger Pressant [Urgent]”, perhaps a clue that the violinist and personal friend Franz Alexander Pössinger was also involved in these revisions.

A clear instance of a violinist’s advice in the final form of the solo part is evident on several long slurs –seemingly unplayable- which appear in the autograph manuscript. In the Meyerstein Copy these have been split into bar-long segments.

It is through the composer’s association with another violinist, George Bridgetower, that the British Library Music Collections holds one of its most fascinating items: Beethoven’s tuning fork. You can read more about it in another post of this blog. 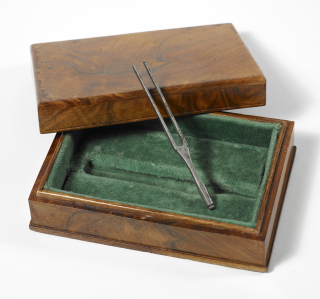 The business relationship with Clementi’s firm wasn’t the best: Beethoven didn’t receive payment for almost two years. War in Europe was partly to blame. The Violin Concerto and its piano arrangement were instead printed first by the Viennese publisher Bureau des Arts et de l'Industrie around 1808/1809.

One of the signs that the Meyerstein copy was used as the Stichvorlage (engraver’s copy) are the brackets in red crayon (not by Beethoven) that appear throughout the score. These mark the page ends of the printed parts of the first edition: 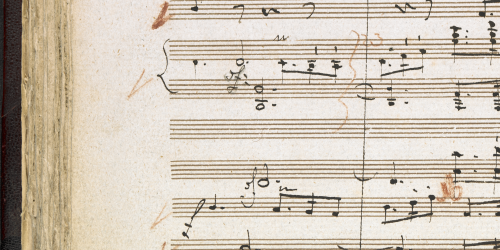 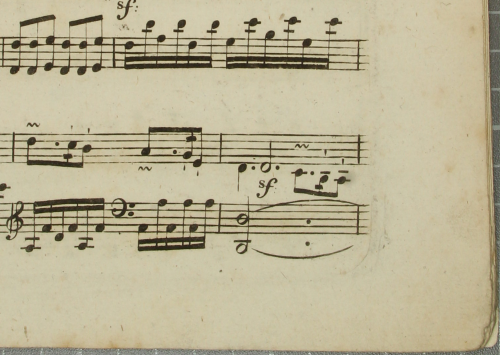 A few mistakes that survived from the Meyerstein Copy through to the first edition provide evidence of the direct relationship between these documents. They also show that Beethoven and his collaborators weren’t the most diligent proof readers.

In bar 301 of the allegro, Beethoven adds the marking “Espressivo”. However the writing is not clear and the engraver understood sempre fortissimo, which is what was published in the first printed editions 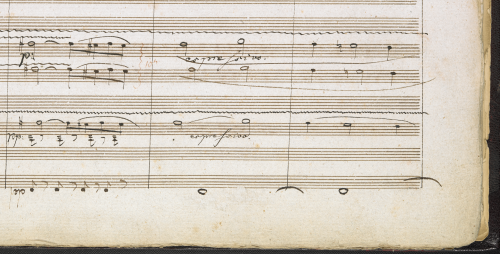 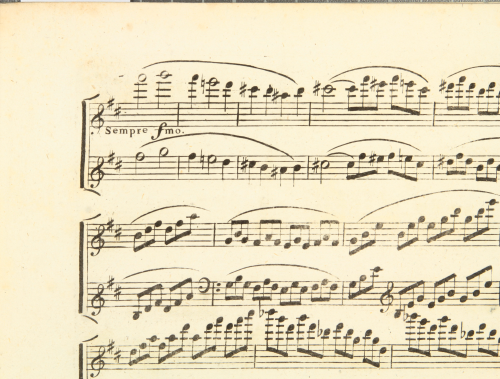 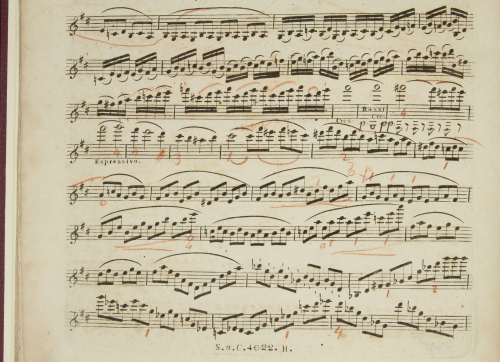 Another instance of not-so-careful proofreading appears in the second violin part of the first edition. If we look closely there is a 5/4 bar! Can you find it?

The Violin Concerto remained in relative obscurity until a crucial performance took place during the Philharmonic Society Concert on the 27 May 1844 in the Hanover Square Rooms in London, with the 13-year-old virtuoso Joseph Joachim making his debut as the soloist. The orchestra was conducted by no other than Felix Mendelssohn himself, who composed his own Violin Concerto in E minor op.64 shortly after his return from London. 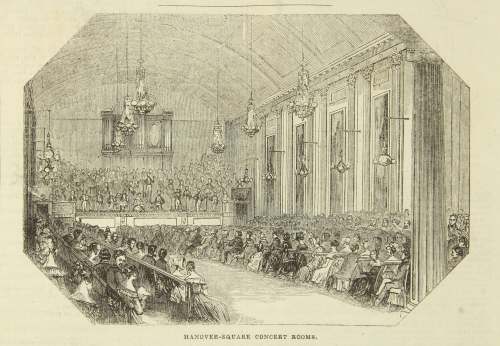 By 1844, musical tastes had changed and audiences were more receptive to the scale and melodic qualities of Beethoven’s Violin Concerto. The tremendous success of Joachim’s performance steered the piece into the musical repertoire, helping it to be recognised as the masterpiece we consider it to be today.

Many thanks to Andrea Harrandt  and Peter Prokop from the Austrian National Library for kindly granting us permission to feature images from the autograph manuscript on this blog post.

Posted by Elias Mazzucco at 2:55 PM