Today (27 May 2018) is the ninetieth birthday of Thea Musgrave, a composer in respect of whom the British Library possesses the largest known institutional collection of archival papers (an acquisition financed in part by the Eccles Centre for American Studies), as well as a substantial collection of sound recordings (both commercial and non-commercial). Some facets of Musgrave's compositional career to date are outlined in last year's anniversary posting, illustrated primarily by some of the concert programmes in the Library's Musgrave archive.

With an official work-list to date numbering over 150 compositions, it is perhaps unsurprising that Musgrave defies straightforward categorisation in terms of genre, a situation which, judging by a 1988 interview with Bruce Duffie, she seems to relish:

“I do chamber works, I do orchestral works, I do opera, I have done ballet, I've done songs, unaccompanied choral pieces — all sorts of things. I like to do different things, so I don't really like to be pigeonholed. There are even some electronic things — mostly with live music, not on its own.”

A 2017 interview with Frank Oteri suggests that Musgrave still has an appetite for such diversity:

“it’s always exciting to work on a slightly less familiar medium, for me that is — makes me consider new ideas. I like to work with everything. You know, just what happens, what comes along.”

As with many published contemporary composers, the vehicle for instigating a new Musgrave composition tends to be the commission. The influence of the commissioning context is manifested particularly in the manifold idiosyncratic instrumentations found in Musgrave's oeuvre. Yet, composing to commission should not be taken to imply a passive response on the part of the composer; in fact, perusal of Musgrave's scores and manuscript material demonstrates a creative praxis that thrives upon customising and stretching the precepts of the genres with which she engages. As she explains in a 2018 interview with Alyssa Kayser-Hirsh, she takes inspiration from a broad range of sources, including the performer for whom she is writing:

“My pieces usually begin as commissions for specific forces and presenting organizations or a particular performer. I frequently get inspired by what I read (poetry and novels) or see (paintings, plays, nature) away from my writing desk, and by what I know and sense about the performer.”

One recurrent Musgrave trait is the animation of instrumentalists with choreographic performance directions, extending their purview to encompass dramatic agency and visual spectacle. Musgrave often animates individuals within the orchestra, obfuscating the delineation between the role of soloist and of tutti (rank-and-file) orchestral player, especially where the animated player is afforded an uncharacteristic degree of virtuosity and of liberty from the conductor's yoke. Such liberty — sometimes characterised as rebellion or defiance — raises notational challenges that may not have an unequivocal solution, as is apparent from the papers relating to Night Music, a work for chamber orchestra in which "the two horn players are featured in a soloistic and dramatic way". It was premiered in 1969, yet the score and parts were revised by Musgrave in 1998, acting in response to feedback from the conductor Nicholas Kraemer.

Night Music is replete with phrases notated so as to afford some temporal liberties: whilst the rhythm is specified, the presence of fermatae and the absence of barlines in these phrases mean that they are not mapped precisely to the prevailing tempo. Various means of co-ordination are employed, ranging from fermatae to repeating cells (sometimes, these invite comparison to Lutosławski's box-notation, whilst at other times, they are little more than regular bars to be repeated “as necessary”, a device which might be described as a vamp, although Musgrave herself never uses the word).

The revisions in 1998 consisted principally of the addition of barlines and of more explicit directions for how the conductor is to signal the various points of co-ordination. The British Library possesses the annotated photocopies on which Musgrave indicated the planned revisions.

Some of these notational revisions can be characterised as clarifications rather than changes. For example, on pages 52–53 of the full score, the addition of a barline and indications as to which hand the conductor should utilise do not compromise the independence of a group comprising 2nd horn, oboes, violoncellos, and double basses. Rather, the conductor indications communicate cues for the events that trigger, or are triggered by, this group's metrically independent entries at a “Tempo di marzia” with its own time signature and barring. As for the added barline, shortly after figure 61, it straddles tied notes. Since the anacrusis is already cued by the first horn, the only potential diminution in independence entailed by the barline is the fixing of the point at which the diminuendo is to commence, aligining it to the violas' arrival on G (at the 2nd bar of figure 61). Instead, the added barline could be construed as serving a practical function, in that it elucidates the syntactical position of the group's entry relative to (circa) figure 61 and to the piccolo's unbarred ad libitum solo — this seems self-evident in the score, but may be harder to navigate in the parts. 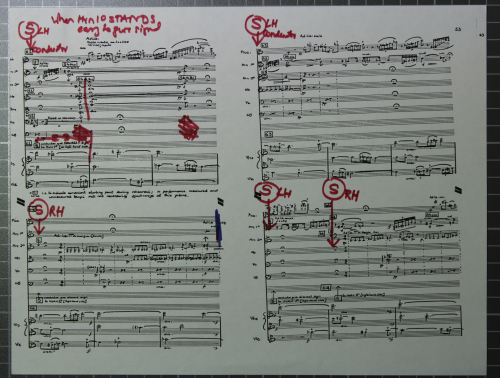 Annotated photocopy of pp.52–53 of the full score (there were no changes to the pagination of the score), indicating
revisions planned in 1998 (but not implemented). Copyright © Chester Music Ltd; reproduced with kind permission.

Ultimately, the revisions on these particular pages were not implemented in the revised edition. Perhaps, the additions were deemed self-evident after all. In fact, Musgrave's comment at the top of page 52 — “when Hrn 1º STANDS // easy to give signal” — suggests that it may not be necessary for the conductor to give such explicit signals. Archival papers can often reveal cases of ideas which were entertained but subsequently dismissed.

Elsewhere, however, notational revisions present on these annotated photocopies were not only implemented, but extended. For example, on pages 42–43, barlines were added to the bassoon, horns, and one solo double-bass. In the process, rhythms are regulated to fit into the prevailing time signature, mapped to the other parts. Whilst some of these mappings are to tied notes, thus eschewing audible alignment, the rhythmic and metric complexity has still been somewhat reduced, ossifying a particular solution to the co-ordination of formerly independent layers in the texture. In the annotated photocopies, these lines see a brief return to an unbarred "AD LIB" at the 4th bar of figure 49. 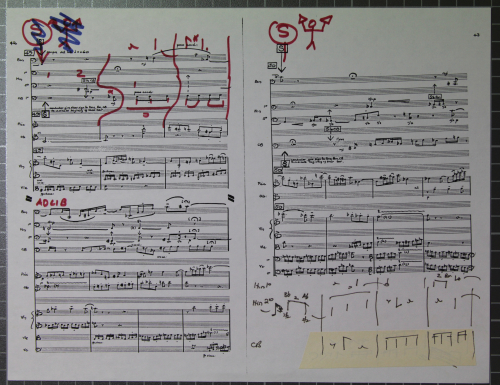 Annotated photocopy of pp.42–43 of the full score (there were no changes to the pagination of the score),
indicating revisions planned in 1998. Copyright © Chester Music Ltd; reproduced with kind permission.

In the revised edition, however, barlines have been added there as well, with the parenthesised fermatae just before figure 50 (which function much like the curlew symbol used by Britten) removed. Also absent from the revised edition is the conductor's double-handed downbeat indicated at figure 50. Judging by the crossed-out indication at figure 49, it seems that Musgrave vacillated over where to stipulate this downbeat, before opting not to stipulate it at all.

Although it is unusual for Musgrave to revise works decades after the première, Night Music is not the only work to have returned to occupy Musgrave over such a long timespan. Her choral work Voices of Power and Protest was first envisaged in 1977, initially under the title "Voices of Warning and Pity", and the Musgrave archive contains evidence of the early sketches, comprising a series of drawings illustrating the plot and choreography, as well as plans for the libretto, which, initially, had been envisaged as a collection of texts by various authors. 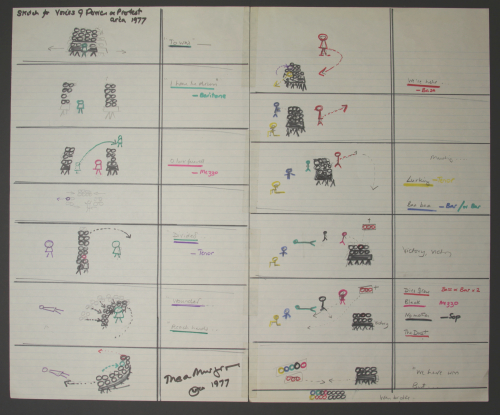 A series of drawings illustrating the plot and choreography for Voices of Power and Protest,
which Musgrave has dated “circa 1977”. Copyright © Thea Musgrave; reproduced with kind permission. 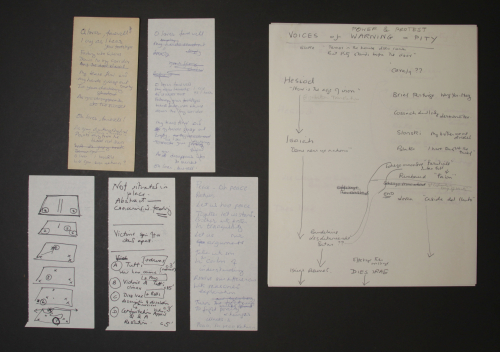 Some of the early plans, dating from 1977, for the libretto for and choreography in Voices of Power and Protest
(initially under the title “Voices of Warning and Pity”). Copyright © Thea Musgrave; reproduced with kind permission.

In 2006, Musgrave proceeded in earnest with writing the libretto and setting it to music, deciding to write her own original text. Nonetheless, she has incorporated a few notable quotations, such as the first stanza of the Dies irae plainchant (prolifically quoted in repertoire both sacred and secular) and the first two lines of the nursery rhyme Baa, baa, black sheep (Musgrave changed the subsequent couplet to “I'm here to take it for that is now the rule”, exemplifying the callous greed of the profiteer who sings these lines). 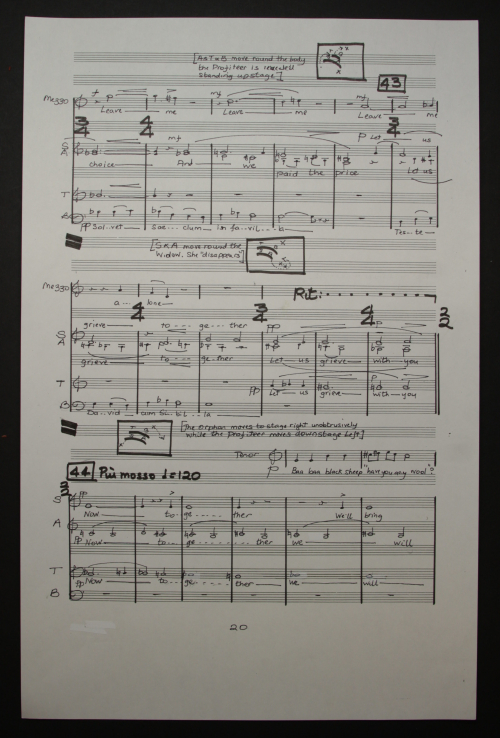 Fair copy of p.20 of the score of Voices of Power and Protest. The second and third lines of the Dies irae plainchant
can be seen in the basses; the first two lines of Baa, baa, black sheep can be seen in the tenor solo,
starting at the 5th bar of figure 44. Copyright © Novello & Co Ltd; reproduced with kind permission.

In this work, the members of the chorus take on acting roles, and the choreography entailed is indicated through diagrams in the score. Similar diagrams can be found in the composition draft, and even the musical sketches for the work. In a sketch for the ending, the diagrams indicate the splintering of the chorus, as they come to the realisation that ostensible victory in war is illusory: “We have, all of us, lost”. 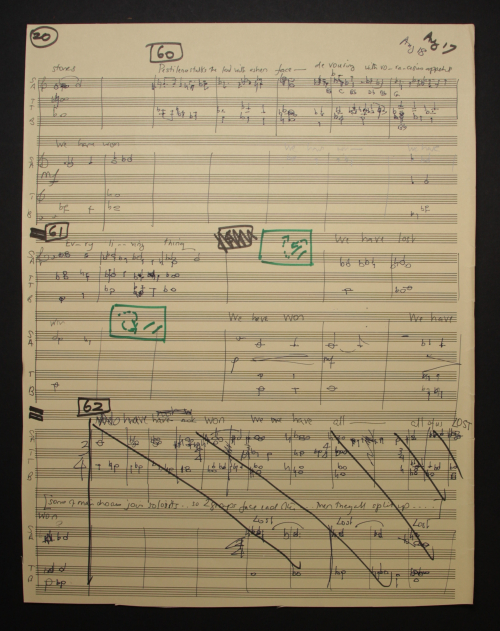 A leaf from the “rough sketches” of the music for Voices of Power and Protest. Although the material after figure 62
has been struck-out, much of it, and the words above the final system, finds its way into the work. Although the dates
in the top-right do not specify a year, it is almost certainly 2006 (on the basis of the other leaves
that were in the same envelope). Copyright © Novello & Co Ltd; reproduced with kind permission.

These dramatic demands are liminal to the precepts usually associated with choral music, and, once again, seem to complicate categorisation. In the 2017 interview with Oteri, Musgrave outlines the manner in which Voices of Power and Protest combines the demands placed on an opera chorus with those placed on an unaccompanied choir:

“an opera chorus is used to memorizing and being blocked, and is usually accompanied by an orchestra. A [stand alone] chorus is not used to being blocked. They’re usually standing in rows, and they’re on book and are often unaccompanied, or maybe with a piano or organ. I thought it would be great if they could be off book and would become the set themselves.”

Musgrave's choral output has been prolific in recent years, ranging in scope from short, festive works such as Hear the Voice of the Bard and Sing to Celebrate Summer to longer works engaging with texts centred on fundamental questions of existence, such as her anthological oratorio, The Voices of Our Ancestors(which also features choreography, although it does not require the choir to sing from memory). Her latest pair of choral works, Missa Brevis and A Collect for John the Baptist, will be premièred at Wells Cathedral on Sunday 24th June, as part of the cathedral's liturgy that day[20]. Although the main birthday celebrations are taking place in New York, there will be several opportunities for audiences in the UK to hear works from Musgrave's oeuvre.