Today is International Cat Day, a special day created in 2002 on the initiative of the International Fund for Animal Welfare to encourage both cat owners and feline enthusiasts to celebrate and take care of them.

Today is then a most excellent occasion to honour some great felines from our music collections! 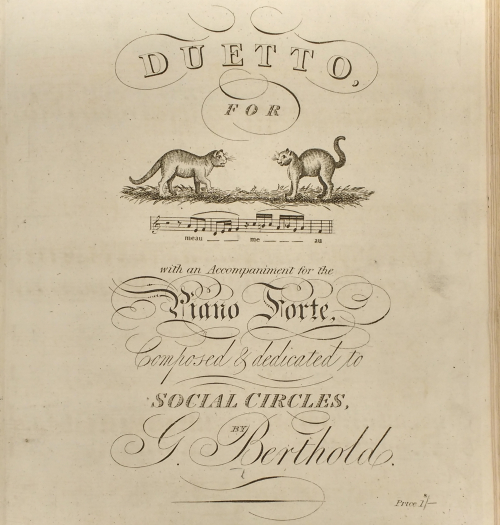 In 1825 London firm Ewer & Johanning published the above ‘Duetto for two cats’. The curious piece is signed by a ‘G. Berthold’, however this is but a pseudonym. It was initially attributed to the great Italian composer Gioachino Rossini, who had just been in London and whose music is quoted in the duet.

Remarkably, the piece is still very much part of the repertoire, often under the later title of ‘Duo Buffo di due gatti’. The duet lends itself to be performed by any combination of voices and it’s been recorded by renowned singers like Christa Ludwig and Walter Berry, among others.

There is speculation that the mysterious G. Berthold was in fact Robert Lucas Pearsall, a British composer who was a founder of the Bristol Madrigal Society.

Edgar Hunt writes that when Pearsall moved from Germany to Switzerland, the manuscript of a certain ‘Cat Duet’ was included in a list of manuscripts he took along with him. Another clue is found on Pearsall’s unpublished ballet ‘Die Nacht eines Schwarmers’, which contains a duet between two dancers dressed as cats whose music resembles the mysterious Berthold’s cat duet above. Was this a jibe on Rossini’s style?

Whoever the composer may be, the arrangement combines two duets from the second act of Rossini’s ‘Otello’ and the ‘Katte-Cavatine’ by Danish composer Christoph Ernst Friedrich Weyse. 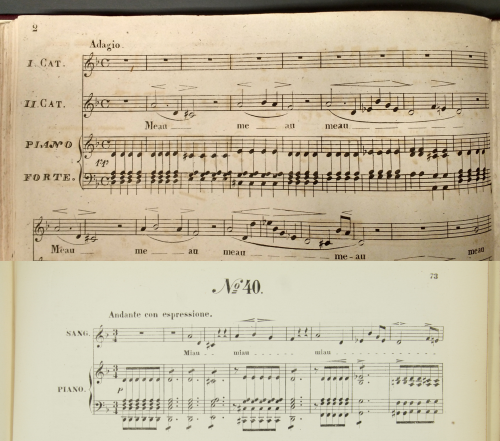 Cats have of course being represented and evoked throughout the history of music. If we go back to 1790, Domenico Scarlatti’s Sonata in sol minore K. 30 (L. 499) was published in London, along with thirty other pieces by the Italian composer. The sonata achieved posthumous fame with the name ‘Fuga del Gatto’ (Cat’s Fugue). According to legend Scarlatti had a cat named Pulcinella who, as cats have always done, walked over his keyboard "unintentionally" playing the musical motif of the Sonata. Scarlatti immediately wrote it down and developed the whole piece from these random notes.

Also from 1790 dates the Singspiel ‘Der Stein der Weisen’. The libretto was penned by Emanuel Schikaneder, who also wrote the libretto for the Magic Flute the following year. The music was a collaboration between Franz Xaver Gerl, Johann Baptist Henneberg, Benedikt Schack and Wolfgang Amadeus Mozart. The extent of each composer’s involvement in the music is contested, however Mozart is often attributed to have written the comic duet ‘Nun liebes Weibchen’ which takes place at the end of Act II.

Characters Lubano and Lubanara realise that the latter has been cursed and can only meow like a cat. Lubano is at first not aware of the enchantment and he angrily reproaches Lubanara for her infidelities. He eventually recognises she is under a spell and together they meow a way out of their situation. 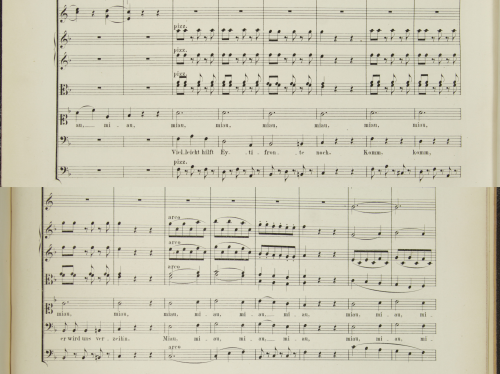 This short cat purrade has unfortunately run out of time. Even though we have had to exclude a few other musical kitties, we couldn’t leave this one out...

Posted by Elias Mazzucco at 5:59 PM