A devout Roman Catholic, Byrd was also a Gentleman of the Chapel Royal with a secure position at court. Well known among the Catholic nobility, with whom his ties were naturally close, Byrd also enjoyed a wealth of connections across Protestant society, including major cultural figures such as Sir Philip Sidney.

This post explores Byrd's music for the Roman Rite. 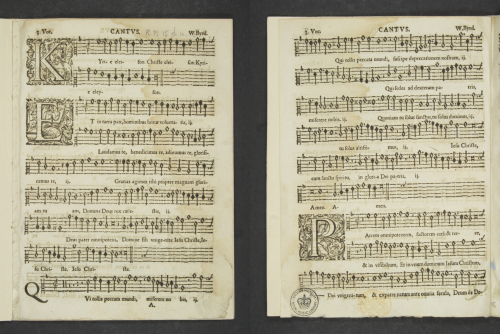 In 1593 Byrd moved from Harlington in Middlesex, where he had lived since the 1570s, to Stondon Massey in Essex. This was only a few miles from Ingatestone, the seat of his friend Sir John, afterwards Lord, Petre. It was almost certainly for clandestine Mass celebrations at Petre’s house that Byrd composed his three Masses, issued separately without title pages, dedicatees or any indication of the printer (Thomas East), but with Byrd’s name placed courageously at the top of every page. The four-part work was printed (and composed) first, the three-part next (shown above) and the five-part last, all between about 1592 and 1595. Second editions of the three- and four-part Masses appeared about 1600. 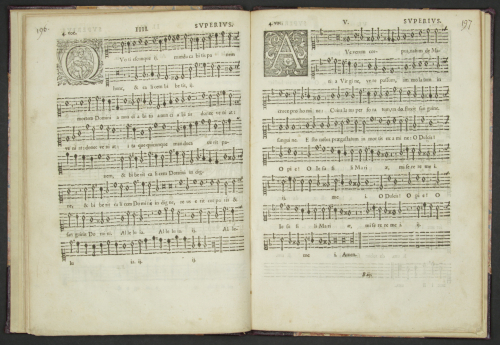 Byrd followed the publication of his three settings of the Ordinary of the Mass with an even more daring venture. His Gradualia is one of the most comprehensive provisions of Mass Propers and related music for the Roman church’s year ever attempted by a single composer. When the first book appeared in 1605 he evidently felt that the times were less dangerous, for it was printed with a titlepage and a dedication to the Catholic Privy Councillor Henry Howard, Earl of Northampton.

But the moment proved ill chosen: it was the year of the Gunpowder Plot and anti-Catholic sentiment was rife. Despite having been approved before its publication by Richard Bancroft, Bishop of London and an ecclesiastical censor of books, Byrd’s Gradualia became dangerous currency. The Frenchman Charles de Ligny was arrested merely for having a copy of the ‘papistical books’ in his possession. The image above shows the communion sentence from the Corpus Christi mass and Ave verum corpus, a Eucharistic prayer in the version printed in the Primer, for private devotions. 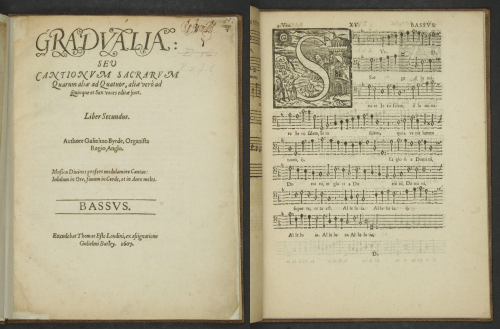 Despite the hostility shown to Book I of Gradualia, Byrd went ahead and published Book II in 1607, openly declaring that the music had been composed for use in the house of its dedicatee, Lord Petre. But he may have found it necessary to withdraw both books until 1610, as the sheets were reissued then with new title pages. The partbook of Book I shown here has the substitute title page of 1610, but those of Book II are from the only surviving set with the original 1607 title pages. On the wrapper of the bassus part the unknown first owner has written ‘Mr William Byrd his last Sett of Songs geven me by him Feb. 1607.’

The letter below, a similar copy of which is also in the British Library (Egerton 3722), along with the two signatures to his will are the only known examples of Byrd’s handwriting.

One of those implicated in the Catholic plot of 1570 in favour of Mary Queen of Scots was Michael Tempest, who was convicted of treason but managed to escape to France entering the service of Philip II. His wife Dorothy and their five children were left without means of support, and Queen Elizabeth granted her an annuity of twenty pounds a year, to be paid quarterly. On 17 October 1581 Byrd wrote to his friend William Petre (son of Sir John, discussed above), an official at the Court of Exchequer, reminding him that a payment was due, at the same time sending the letter below to certify that she was alive and well. 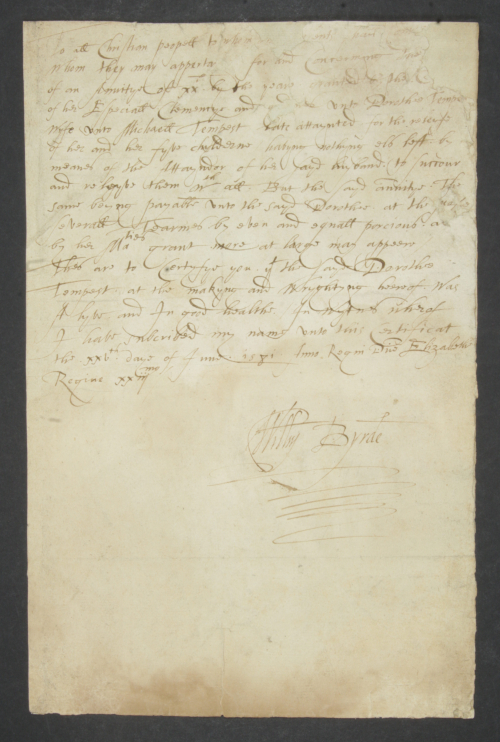 Posted by Elias Mazzucco at 9:20 AM