‘For Jean on her Birthday’: Vaughan Williams’s String Quartet in A minor 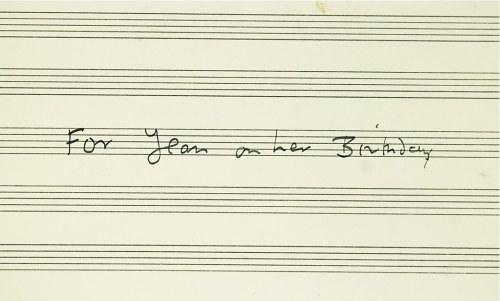 'For Jean on her Birthday’: Ralph Vaughan Williams’ inscription on the autograph score of his String Quartet No. 2 (MS Mus. 1842/1).

Seventy-six years ago today, a remarkable present arrived for Jean Stewart’s birthday: the first two movements, in manuscript, of a string quartet, newly composed and dedicated to her. ‘Alas – the scherzo refuses to materialize and will have to wait for next birthday!’ read the accompanying message, signed ‘Uncle Ralph’. [1]   And Ralph Vaughan Williams kept his word: he actually completed the third and fourth movements of the work, his String Quartet no. 2 in A minor, before 1943 was out. 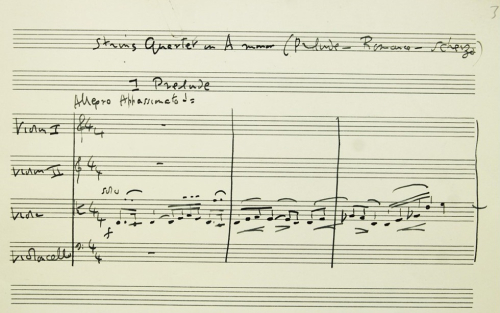 Jean Stewart (afterwards Hadley) was a violist, and had come to know Vaughan Williams through Ursula Wood, her close friend and later the composer’s second wife. Stewart had played under Vaughan Williams’s baton in the Leith Hill Festival Orchestra, and also in the first performance of his Double String Trio, an early incarnation of the Partita for Double String Orchestra, in 1938.  Three years later she joined the Menges Quartet, which the violinist Isolde Menges had founded in 1931, and it was this ensemble that Vaughan Williams had in mind when he wrote his Second String Quartet. [2]  The music is not only dedicated to Stewart but written to be played by her: the viola, which opens each movement, is given particular prominence. [3]

The first four bars of the third movement (Scherzo). In the first bar Vaughan Williams notes the theme’s origin in his music for the 1941 film ‘49th Parallel’ (MS Mus. 1842/1).
© Oxford University Press 1947. Reproduced by permission. All rights reserved.

The Second String Quartet occupies an interesting position in Vaughan Williams’s music, having emerged between the Fifth and Sixth symphonies, with their shockingly different characters. The Fifth Symphony, which had received its première in June 1943, during the quartet’s gestation, is a dappled modal meditation, a Pilgrim’s Progress out of war’s madness towards a refuge of sanity and peace, and it won Vaughan Williams much gratitude.  Michael Kennedy detected some of the same ‘sustained rapture’ in the Quartet, which he saw (along with the Oboe Concerto of 1944) as a ‘satellite’ [4] or a ‘side-shoot’ of the symphony. [5]  Yet the Quartet can also ‘be seen to share the same mood’ as the Sixth Symphony – a remorseless, vein-freezing utterance astonishingly unlike the Fifth – which was begun the following year: Jeffrey Richards perceives a ‘bleak, anguished and jagged’ character in the first three movements, though they do not make quite the same terrifying plunge as the symphony into a world of rage and ruin from which, even as we listen, the last of beauty is wrenched away.  It is also significant that in the score of the Scherzo Vaughan Williams explicitly notes his re-use of a theme originally written for the war film ‘49th Parallel’, specifically for scenes in which the Nazis appear. [6] This is not an untroubled soundscape, and yet the Epilogue – marked ‘Greetings from Joan to Jean’ because of its origin in music for an abandoned film about St. Joan of Arc – is rest and benediction. [7]  If the Fifth is Vaughan Williams’ symphony of consolation, and the Sixth his symphony of desolation, the string quartet lies bittersweetly in between.

‘I am longing to get my teeth into it & for you to come & hear it with the [Menges] Quartet, and then to work it & really get to know it,’ Stewart had written to Vaughan Williams on receiving the final two movements. ‘Oh we are going to have a great time with “my” Quartet bless you!’ [8] The Second String Quartet was heard privately at the White Gates, Vaughan Williams’s house in Dorking, in July 1944, and then given its first public performance by the Menges Quartet on the 12th October that year: Jean Stewart’s present to the composer on his birthday. [9]  (The occasion of the première was one of the lunchtime concerts at the National Gallery organised by Myra Hess and Howard Ferguson, which ran from the outbreak of war in 1939 until 1946). [10]  After some revisions, and including, at Vaughan Williams’ request, the musicians’ markings, the score was published in 1947 by the Oxford University Press (with the dedication ‘For Jean on her Birthday’ clearly stated, as instructed by the composer). [11] 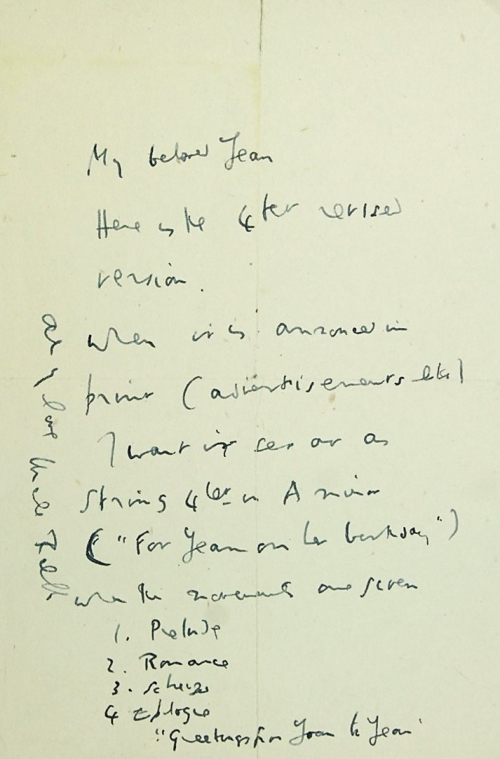 Vaughan Williams writing to Stewart in around 1947: ‘I want it set out as String [Quartet] in A minor (“For Jean on her birthday”)’ (MS Mus. 1842/2)
Reproduced by permission of the Vaughan Williams Charitable Trust.

The British Library has been looking after the manuscript score for some years, but has recently been enabled to purchase it outright, thanks to a generous financial contribution by the Vaughan Williams Charitable Trust. The manuscript (MS Mus. 1842) now belongs to the nation – but of course it shall always remain Jean Stewart’s birthday present. ‘Without exaggeration this Quartet is the most lovely thing that has happened to me in my life,’ was her verdict, ‘& it will continue to be a joy to me as long as I live’. [12]  It is a special manuscript to have in the Collections.