Frankie Perry, who recently completed a PhD placement with Music Collections, introduces a newly-catalogued collection of Birtwistle manuscripts at the British Library.

The British Library’s collection of manuscripts by Sir Harrison Birtwistle (MS Mus. 1778) is now fully catalogued and searchable online. The modest collection was acquired in 2012, and comprises a miscellany of sketches, drafts, and papers given by the composer to his son in 1989. That same year, Birtwistle entered into an exclusive living archive agreement with the Paul Sacher Stiftung in Basel, which continues to acquire his manuscripts as they emerge. The British Library’s material is particularly important for the study of Birtwistle’s works from the 1940s to the late 1980s however, many of which are not represented in the Sacher archive. It is invaluable therefore in filling in many significant gaps in our knowledge of the genesis of many of his major, early works. In 2015, David Beard published a useful initial inventory of the British Library materials,[1] but much extra detail (and a few additional discoveries) can now be perused in the Library’s handlist. 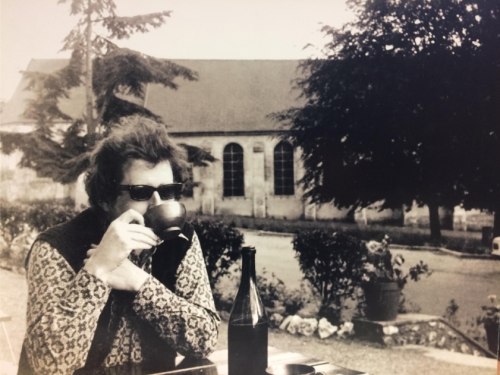 Coinciding with the end of the first fully-staged production of Birtwistle's The Mask of Orpheus since its première in 1986, which ran at English National Opera in October and November this year, the rest of this blogpost gives an insight into material relating to this ‘world-defining’ collaboration between Birtwistle, Peter Zinovieff, and Barry Anderson.[2] The premiere of The Mask of Orpheus in 1986 (also by ENO at the Coliseum) was ‘triumphantly successful’,[3] but the work’s extreme narrative and logistical complexity has meant that, since then, most organisations have found the idea of putting it on to be ‘imponderable’.[4] Despite a 33-year absence from the operatic stage, the sense of monumentality associated with the work has endured, and its position as a major landmark of modernist opera has been bolstered by the substantial scholarly attention it has already received, including a dedicated monograph by Jonathan Cross.[5]

The Mask of Orpheus sketches

The Sacher Foundation holds most of the extant sketches for the opera (over 1100 folios), but the BL’s collection is also substantial, totalling over 550 relevant folios. Several sketches are dated, which is helpful for a work that had such a protracted gestation (famously, much of the work for Acts I and II took place in 1973-5, but progress was halted in the later 1970s and recommenced 1981-3.). It quickly becomes apparent that the material here is weighted towards the earlier stages of the collaborative and compositional process. Indeed, one major revelation of the BL’s Mask of Orpheus collection is that, contrary to Birtwistle’s recollections, some material for Act 3 was begun as early as March 1974 – it was previously assumed that the later music was planned and composed after the hiatus.[6]

The majority of sketches are held across two A4 folders (unlike the BL’s extensive Gawain material, which is mostly on A2-sized paper). The first contains 193 folios of plans, sketches, and instructions, most of which have either been identified against the score, or contain written planning relating to particular aspects of composition. This includes:

The material in the second A4 folder remains, for the most part, in the order in which it was received by the BL; however, papers have been grouped according to clear divisions of sketch type. Indeed, all the early stages of sketch typically undertaken by Birtwistle can be found here: extensive numerical workings and schemes, as well as separate sets of sketches showing pitch, rhythm, and structural work.[7] There are also various documents showing Peter Zinovieff’s work on libretto, structure, and conceptual design, as well as brief correspondence between him and Birtwistle. Pictured here is part of a typescript fragment of an early version of the libretto, which looks much more like a conventional libretto than the beautiful graphic one eventually published by Universal Edition! A further A2 volume contains assorted sketches by Zinovieff and Birtwistle, including notes on dramatis personae and a 16-folio form scheme for Act 3.

For listeners delighted by the distinctive early-80s-IRCAM electronic music that flows through and punctuates The Mask of Orpheus, the extensive schemes and plans for this dimension of the opera may disappoint when seen on paper, so far short they fall in giving an impression of these passages’ sonic reality. They do, however, give a useful impression of what Birtwistle had on paper before Barry Anderson – the composer and electronic musician who realised these spine-tingling ‘electronic “magic harp’’’[8] sounds – did his magic. Anderson’s own technical sketches have been examined in discussions of his work on the project, but Birtwistle’s structural blueprints help by providing a much fuller understanding of the basis for the pair’s experimentation at IRCAM (in Paris, 1981-2).[9] Sketches are present for some of the mime episodes (Allegorical Flowers of Reason and Passing Clouds of Abandon); notations sketch out Apollo’s interjections; and doodled lines indicate the fading in and out of the Auras.

Part of a schematic sketch for the electronic interludes, MS Mus. 1778/1/1

It is well known that Birtwistle has tended to store his sketches somewhat haphazardly, and this was reflected in the condition in which the collection arrived at the BL. While some acquisitions from composers need little intervention, the Birtwistle collection raised several questions about the extent to which we should preserve incongruencies in a received arrangement. For instance, amidst a pile of loose Orpheus sketches dated 1974 was an undated page with the instruction ‘a stylised sheep’s ‘baa”: the sheep belong to the “mechanical pastoral” chamber opera Yan Tan Tethera, which was premiered shortly after Orpheus in 1986 but begun much closer to that time. As such, there is no plausible creative reason for the odd page of Yan Tan Tethera to appear amongst this early Orpheus material; these anomalies speak more to messy storage than to anything worthy of archival preservation. (A note is made on the catalogue nonetheless!). 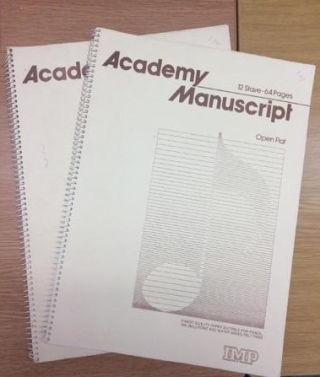 Sometimes, of course, folders or books containing material relating to multiple pieces shed light upon previously unknown connections and timelines. Two manuscript notebooks (pictured) catalogued under Gawain are particularly interesting in this regard. Here, between pages containing detailed sketches of Morgan le Fay’s lines that open Gawain, we find pages clearly relating to Four Songs of Autumn, 4 Poems of Jaan Kaplinski, and an abandoned chamber orchestration of Deowa, in such close proximity as to confound accepted chronologies of these works’ commencement.[10]

However, the preservation of such creative intermingling afforded by spiral binding is a rare luxury in the Birtwistle collection. More often, the chaotic presentation of much of the material – replete with illogically-grouped sheaves of loose papers crammed into disintegrating folders – required tricky archival decisions to be made in order to tease out a coherent cataloguing strategy. The collection does include one notebook full of Orpheus material, dating from Birtwistle’s time as a Visiting Professor at Swarthmore College in 1973-4, but this has problems of its own. Unlike the refreshingly pristine Gawain notebooks pictured left, the pink specimen below had to be quarantined at the BL because of its perturbing smell.[11] Fortunately, the mould and rust damage does not obscure much of the sketch material, which comprises complex numerical and rhythmic schemes typical of Birtwistle’s early-stage compositional process. 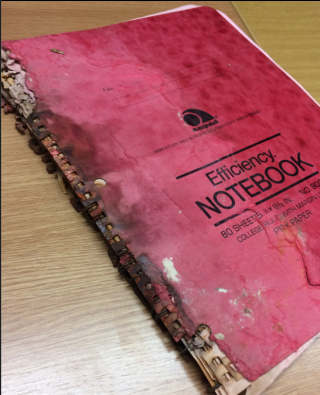 Mouldy notebook (prior to conservation treatment), containing sketches for 'The Mask of Orpheus', MS Mus. 1778/1/1 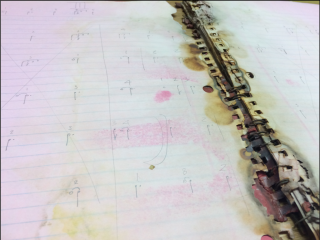 Inside the mouldy notebook

Other myths and landscapes

Finally, it’s worth giving a brief overview of items elsewhere in the collection which might be considered pre-histories of aspects of Birtwistle’s work on The Mask of Orpheus. As mentioned previously, the bulk of archive materials reside in Basel, and most individual compositions are at best patchily represented in the BL. For instance, the most direct topical predecessor for The Mask of Orpheus is the Birtwistle/Zinovieff collaboration Nenia: The Death of Orpheus (for soprano, 3 bass clarinets, crotales and piano, premiered by Jane Manning and Matrix in 1970), and for this piece the BL holds just one single musical sketch. It’s a good one, though: a folded piece of A3 graph paper shows the name ‘Euridice’ split into syllables across the page, encapsulating neatly the bold fragmentation of voice and language – and the ritualization of names and naming – that pervades the finished score.

Robert Adlington has pointed to Down by the Greenwood Side and Bow Down as examples of projects prior to and contemporary with The Mask of Orpheus in which the matter – and manner – of (re)telling tales is itself thematised.[12] In these cases, traditional ballads are presented in multiple forms. Bow Down (1977) is among the theatre music present in the BL’s collection dating from Birtwistle’s time working with directors Tony Harrison, Peter Hall, Harold Pinter, mask designer Jocelyn Herbert, and others at the National Theatre – these projects occupied much of his time during the late 1970s while work on The Mask of Orpheus was on pause, and had a considerable impact on his music-theatrical style. Elsewhere in the collection are scores, sketches, and doodles dating from Birtwistle’s time teaching music at Wardour Castle and Cranbourne Chase schools (1960-65), include scores for school plays that used stock characters like ‘The Good One’ and ‘The Green Man’. Such figures, in their continual adaptability and appeal, are clear precursors for much of Birtwistle’s later work, not least in his operatic oeuvre.

Of course, myth and landscape – pastoral and violent – have long been central to Birtwistle’s creative imagination. It is worth mentioning the extensive sketches at the BL for Earth Dances, which was premiered the same year as The Mask of Orpheus and might be considered a wordless apotheosis of some of its themes. Looking further back, the earliest pieces in the BL’s collection demonstrate that even as a teenager, he was writing music inspired by natural landmarks steeped in folklore. Drafts of his ‘Dance of the Pendle Witches’ and ‘Pendle Mystery’, both dated 1949, evoke the looming Pendle Hill of his native Lancashire, much like Silbury Air of 1977 conjures Silbury Hill, the ancient mound in the Wiltshire countryside that Birtwistle would later call home. 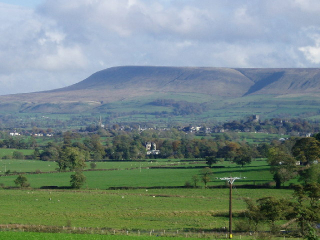 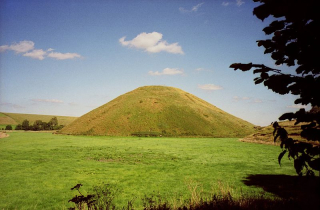 There is so much more to say about this collection that won’t fit into this blog post – you’ll have to explore it for yourself!

Frankie Perry is completing a PhD at Royal Holloway, University of London. In 2018-19, she undertook a PhD Placement at the British Library, primarily working on the collections of Harrison Birtwistle, Elisabeth Lutyens, and Cornelius Cardew. She tweets at @Frankles23.

[4] Jonathan Cross interview. Cross also notes the consideration of agent Andrew Rosner that it was Peter Hall’s particularly ‘elaborate’ conception of the opera’s production that led to its reputation as being prohibitively expensive to stage. See p. 35, FN 72.

[6] Beard picked up on this in Harrison Birtwistle’s Operas and Music Theatre, 84-85.

[7] Beard has studied Birtwistle’s sketches and working process extensively. For an introduction, see Beard, “The life of my music’: What the sketches tell us’, in Harrison Birtwistle Studies, 120-174.

[10] For sure, order of pages in a notebook does not necessarily imply chronology of work; however, the strong similarities in handwriting, pencil weight, and sketch type in this case strongly suggest consecutive attention to three or more works.

[11] Poor paper condition is not unique to the BL’s Birtwistle collection: Jonathan Cross points out a mouldy shadow on a Sacher Foundation photocopy reproduced in his book: ‘a consequence of the fact that the composer used to store his materials in a damp cellar’. See Harrison Birtwistle: The Mask of Orpheus, 48.