Gradually a catalogue is beginning to take shape for parts of the enormous and complex Boosey & Hawkes archive (MS Mus. 1813). The first series of the business archive, the Directors‚Äô files (MS Mus. 1813/2/1) is now fully catalogued and available to readers. Manuscripts Cataloguers Ceri Humphries and Dominic Newman write about two of the interesting characters they have met in the collections.

‚ÄòPublishers do like to have perfect editions‚Äô: Thomas Conway Brown‚Äôs reliable and meticulous approach to work led to a longstanding relationship with Hawkes & Son, and subsequently Boosey & Hawkes. Publishing under both his own name and the pseudonym Roger North, his distinctive handwriting can be spotted in military band scores throughout the Boosey & Hawkes music archive. 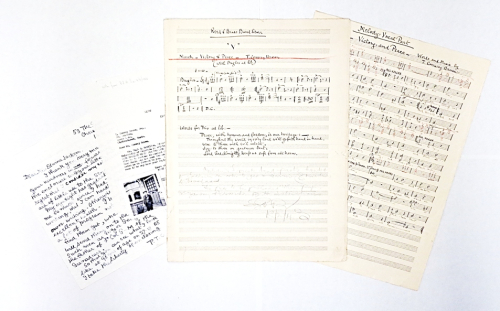 Hawkes & Son, one of the two companies that merged in 1930 to form Boosey & Hawkes, was built on a strong tradition of military music. Founder William Henry Hawkes had served as State trumpeter to Queen Victoria and, alongside the music publishing business, an instrument manufacturing arm produced brass and reed instruments.1 Regular publications such as the Military Band Journal provided repertoire for players and ensembles of all levels, in response to the demand of the late 19th and early 20th centuries.

Thomas Conway Brown, or Tommy Brown to close colleagues, submitted his first arrangement to Oliver Hawkes around 1890, starting a working relationship that would continue for over 50 years. In 1946, Brown recalled to Ralph Hawkes: ‚ÄòMany years ago your father told me that a fortune awaited the man who could bring out something new in the march line ‚Äì I‚Äôve been trying ever since‚Äô.

Brown was a military musician, serving as a sergeant in the Royal Artillery Mounted Band and organist of the All Saints Garrison Church in Aldershot. The popularity of military marches in the early 20th century brought success, and his judgement and attention to detail were clearly valued by Boosey & Hawkes. Aside from the many scores ‚Äì arrangements and original works ‚Äì that feature Brown‚Äôs handwriting in the archive, letters from the final years of Brown‚Äôs career show that he was regularly called upon to assess, and correct, the work of other composers and arrangers.

By 1947, with popularity waning, publication of military band music began to slow. Brown, into his 80s and suffering from gradually failing eyesight, submitted his final arrangement to Ralph Hawkes in 1949.

1. While Boosey & Hawkes continued to manufacture instruments, the publishing and manufacturing arms of the business were later separated. The archive held by the British Library is that of the publishing company only.

One cataloguing conundrum in the Boosey & Hawkes archive arose from occasional letters to Leslie Boosey signed only, enigmatically, ‚ÄòDaddy‚Äô.  Boosey‚Äôs own father had died in 1920, so the replies ‚Äì all beginning ‚ÄòDear Daddy...‚Äô ‚Äì would have been just as puzzling, had they not given away a vital clue in the postal address.  These referred to an ‚ÄòA. H. Behrend‚Äô of Pollock Road, Walworth, London.

John Arthur Henry Behrend ‚Äì who may have been born Johann Arthur Heinrich in Danzig (now Gdansk, Poland) ‚Äì was a composer of songs and ballads, some of which had been published by Boosey & Co. and met with success in the late Victorian era.  He collaborated with such lyricists as Frederic Weatherly, the author of the words to ‚ÄòDanny Boy‚Äô, and was a grandson of the Irish composer Michael Balfe.  And a song named ‚ÄòDaddy‚Äô ‚Äì a setting of Mary Mark Lemon‚Äôs lullaby for a widowed father, sung as if by his only child ‚Äì was one of his best-known.  Behrend adopted the name for his own correspondence: ‚ÄòDaddy‚Äô was literally his signature tune. 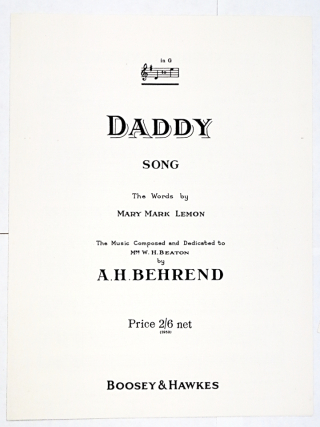 But fickle fashion knows no compunction.  By the mid-1930s, there was no market for music in Behrend‚Äôs style, and Leslie Boosey, in his kindly way, had to turn down one submission after another.  Still ‚ÄòDaddy‚Äô was undeterred, sending in letters varying in tone between breeziness and despondence.  In 1934 he announced, ‚ÄòI‚Äôve been listening in to the Radio, and have written these two pieces.  If taken up by the ‚ÄúSavoy‚Äù ‚ÄúMetropol‚Äù & Alfredo Campoli‚Äôs band I think they would be successful‚Äô.  Elsewhere, with an edge of defiance, he lists ‚Äòthe only five pieces of my music I don‚Äôt want lost‚Äô.

He was also given to reminiscence.  'I was at Haileybury with young Hoskyns, cheeky little brat‚Äô, he recalled. ‚ÄòHe is now an Archdeacon at some Cathedral‚Äô.  One wonders how the Venerable Benedict George Hoskyns MA (1856-1935), Archdeacon of Chichester, might have responded to this pithy assessment of his character.

Although Behrend‚Äôs letters often suggest a man in the evening of his life, creative power still burned in him.  ‚ÄòYou know although over 80, I think I can compose still.  If I had a good libretto I‚Äôd sit down & write a grand or light opera.‚Äô He was still submitting new compositions only months before his death, at the age of 82, in November 1935.